A strong magmatic eruption with volcanic ash reaching 14.3 km (47 000 feet) above sea level took place at Anak Krakatau volcano in Sunda Strait, Indonesia on April 10, 2020. This is the strongest activity at the volcano since the violent eruption, partial collapse of the volcano and deadly tsunami on December 22, 2018.

The volcano started erupting at 14:58 UTC on April 10, 2020, with thick white-gray volcanic ash some 200 m (650 feet) high from the bottom of the crater. The eruption was recorded on a seismogram with a maximum amplitude of 40 mm and a duration of 72 seconds. At the time, volcanic ash was not identifiable on satellite imagery due to a meteorological cloud. 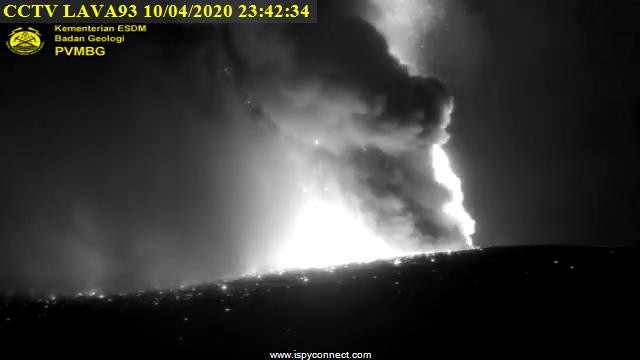 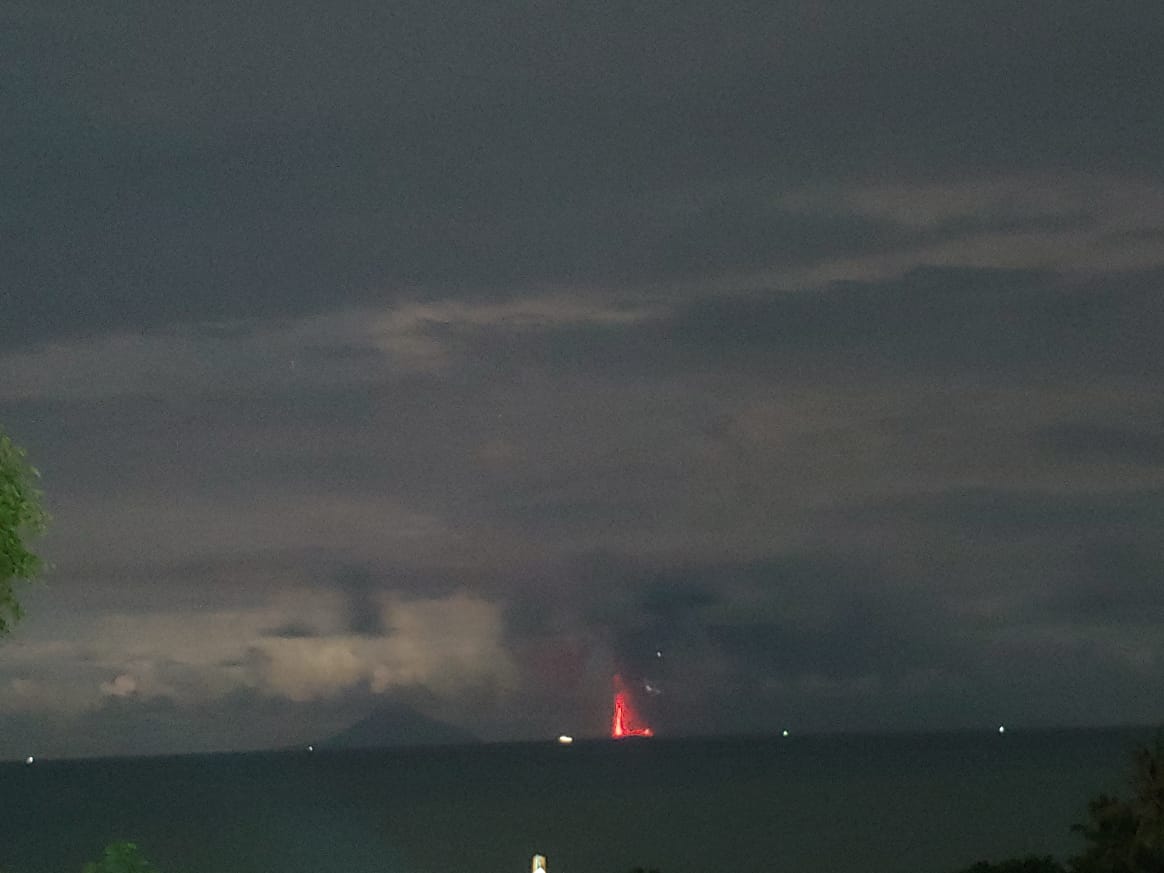 Images courtesy Dr. Devy Kamil Syahbana, the man behind Magma Indonesia. The first image was taken by their webcam and the second from observatory 43 km (26 miles) from the volcano.

Possible high-level eruption to 14.3 km (47 000 feet) above sea level was reported by the Darwin VAAC at 18:45 UTC. The Aviation Color Code was raised to Red.

Another meteorological cloud started approaching the summit from the southeast by 22:45 UTC, preventing clear observations by 01:00 UTC on April 11.

Volcanic ash was slightly discernible on the latest satellite imagery at 01:00 UTC due to cloud obscuration, the center reported, adding that volcanic ash to 14.3 km (47 000 feet) a.s.l. was expected to have dissipated with surrounding rain clouds.

At 04:15 UTC, the latest advisory for the volcano at the time of press, the center reported continuous volcanic ash emission to 6 km (20 000 feet) moving northwest. The Aviation Color Code remained Red.

The South Lampung Disaster Mitigation Agency (BPBD) in Lampung reported no scent of sulfur or volcanic ash in the regency and alerted local residents that volcanic activity on Anak Krakatau had died down, The Jakarta Port reported at 05:29 UTC (12:29 LT) today.

"The BPBD contacted the Anak Krakatau observation team. They said that the status was still at ‘alert’ and that the volcanic activity had stopped, so the residents were advised not to panic," the head of the National Disaster Mitigation Agency’s (BNPB) data, information and communication center, Agus Wibowo, said.

PVMBG head Kasbani said the eruption was relatively small compared to eruptions that occurred between December 2018 and January 2019.

With the devastating tsunami of December 2018 (430 fatalities) still fresh in memory, military and police officers are on standby with village and subdistrict officials over the possible evacuation of residents.

Residents of the Kalianda coastline have reportedly evacuated to the mountains immediately after the eruption started.

According to volcano expert Surono, another tsunami was less likely to occur 'as the 2018 tsunami was caused by a soil erosion buildup from years of eruption.'

The activity intensified on August 25 and 26 when the volcano entered its paroxysmal phase.

The first explosion took place at Perboewatan at 05:30 LT, triggering a tsunami heading to Telok Betong, now known as Bandar Lampung. At 06:44 LT, Krakatau exploded again at Danan, with the resulting tsunami propagating eastward and westward. The third and largest explosion, at 10:02 LT, was so violent that it was heard 3 110 km (1 930 miles) away in Perth, Western Australia and the Indian Ocean island of Rodrigues near Mauritius, 4 800 km (3 000 miles) away, where the blast was thought to have been cannon fire from a nearby ship. The third explosion has been reported as the loudest sound heard in historic times.1

According to the GVP, pyroclastic surges traveled 40 km (25 miles) across the Sunda Strait and reached the Sumatra coast. The caldera collapse during the catastrophic 1883 eruption destroyed Danan and Perbuwatan, and left only a remnant of Rakata.

The eruption injected an unusually large amount of sulfur dioxide (SO2) gas high into the stratosphere, which was subsequently transported by high-level winds all over the planet. This led to a global increase in sulfuric acid (H2SO4) concentration in high-level cirrus clouds. The resulting increase in cloud reflectivity (or albedo) reflected more incoming light from the Sun than usual, and cooled the entire planet until the sulfur fell to the ground as acid precipitation.1

The skies were darkened across the world for years after the eruption, creating spectacular sunsets for many months. For several years it was reported that the Moon appeared to be blue and sometimes green.

After a quiescence of less than a half-century, the post-collapse cone of Anak Krakatau was constructed within the 1883 caldera at a point between the former cones of Danan and Perbuwatan.

Frequent eruptions were reported at the volcano since 1927 (VEI 1 to 3).