The AccuWeather.com Hurricane Center has the latest stats on Tropical Storm Bret.

Strong northeasterly winds over the Eastern Seaboard of the U.S. will steer Bret even farther to the northeast away from the northern Bahamas, protecting the U.S. Coast from a direct impact.

The same strong upper-level winds that will keep steering Bret out to sea will contribute to a gradual weakening. 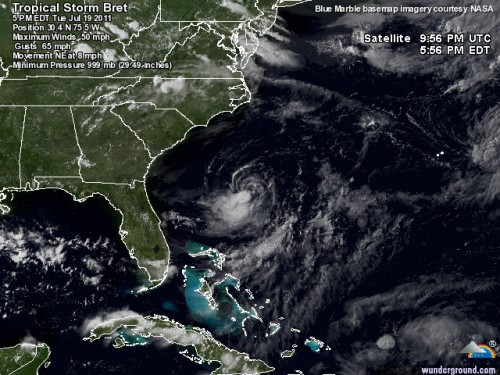 Churning about 150 miles off the eastern coast of Florida, Tropical Storm Bret will pose little threat to the U.S. mainland this week as it is expected to remain well offshore. The season’s second named storm, upgraded from a tropical depression late on Sunday evening, is meandering around the northern Bahamas this morning.

Grand Bahama, including the city of Freeport and Great Abaco, will experience bands of heavy rain today, along with wind gusts that could approach tropical storm force (39 mph or greater). An eventual north to northeasterly trajectory will send the storm out to sea over the next few days, with the possibility of the system brushing Bermuda later in the week.

Since Bret is a rather small and compact storm, the effects felt on the Southeast coast will be limited. Nonetheless, long period swells will increase the risk of rip currents over the next few days along the surf zone from Florida north to the Outer Banks of North Carolina.

Because many vacationers will be packing these beaches over the coming days, please be sure to heed the advice and warning flags provided by local authorities or beach patrol. Mariners heading well offshore will feel the most direct effects of Bret, as waves will increase to 8 to 12 feet within a few hundred miles of the storm’s center.

AccuWeather.com meteorologists have been targeting this zone off the Southeast coast as a trouble spot for tropical development for days now.

Elsewhere across the Atlantic tropical basin, conditions remain quiet and unfavorable for development to begin the week.

However, an area of showers and thunderstorms centered in the eastern Pacific, west of Central America is showing some signs of organization. A tropical depression could form in this area within the next couple of days. (AccuWeather)