Hundreds of Baghdad residents were admitted to hospital after a chlorine gas leak at a water purification plant but most had been discharged by Wednesday morning, officials said.

There was a leak of chlorine gas at a water purification plant in the Kasra-wa-Atash district of northeast Baghdad this Tuesday.

About 800 people were received at different nearby hospitals, suspected of chlorine poisoning. But most were released shortly after and there are no serious cases. Most of the cases were in Sadr City, a poor and overcrowded Shiite district in the northeast of the capital. 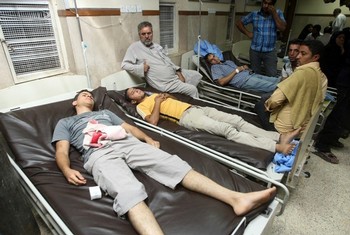 An interior ministry official said the leak happened at about 8 pm (1700 GMT) and was caused by a technical fault not sabotage. Residents panicked after experiencing breathing difficulties and burning eyes. (TerraDaily)

A strong explosive eruption took place at Stromboli volcano, Italy at 14:47 UTC on July 28, 2021. The explosion was energetically more intense than usual, INGV-OE said. Volcanic products were radially dispersed in the crater area with fallout along the Sciara del...

At least 14 people have been killed over the past couple of days after unseasonal rainstorms hit the majority of Yemen's southern governorates. At least 1 000 households are in need of basic services, including at least 90 families in the Marib area and 400 in...

An unprecedented heatwave is sweeping over Hokkaido, Japan, with numerous all-time records falling almost every day. Very high temperatures are expected to continue over the next 14 days. One of the most notable records on July 27 was registered in Asahikawa, holder...

Extremely heavy rains affecting China's Henan province over the past 10 days caused massive damage and claimed the lives of 71 people, as of Tuesday, July 27, 2021. The storm dropped a year's worth of rain over the province's capital Zhengzhou in just 3...

Heavy rains and resulting floods and landslides affecting the Indian state of Maharashtra since July 21 have claimed at least 207 lives and left 11 people missing, the state government said Tuesday, July 27, 2021. The worst-hit district is Raigad, with 95 fatalities...

A strong eruption started at the Indonesian Sinabung volcano, North Sumatra at 06:20 UTC on July 28, 2021 (13:20 local time). The Aviation Color Code was raised to Red. According to Sinabung Volcano Observatory, the eruption lasted for about 12 minutes. Two volcanic...

Tropical Storm "Nepartak" -- the 8th named storm of the 2021 Pacific typhoon season -- is heading toward the eastern coast of Honshu, Japan. Landfall is expected in an area close to Sendai City, Tohoku Region around midnight UTC on July 28, 2021, with...

A violent hailstorm hit the town of Fidenza, northwest of Parma, Italy, on July 26, 2021, damaging hundreds of vehicles and bringing traffic on a highway between Milan and Naples to a standstill. A number of people were injured, mainly by glass shards from cracked...

1 500 people have been forced to evacuate parts of south-western Sardinia, Italy after devastating wildfires fueled by strong and hot winds rapidly spread through parts of the island over the weekend, July 24 and 25, 2021. Regional governor described the wildfires...

At least 8 people have been killed and several others critically injured in a series of car crashes on Interstate-15 near Kanosh, Millard County, Utah on Sunday, July 25, 2021. According to the Utah Department of Public Service (DPS), 22 vehicles were involved in...

Volcanic unrest has increased at Whakaari/White Island, with sustained greater heat flow and volcanic gas changes, prompting GeoNet to raise the Volcanic Alert Level to Level 2 and the Aviation Color Code to Yellow. There is still uncertainty about what is driving...

A very bright fireball entered Earth's atmosphere over southern Norway at around 23:09 UTC on July 24, 2021 (01:09 LT, July 25). The event lasted for about 5 seconds before the object disintegrated in a series of flashes. ​A spokesperson for the Norwegian...

The latest in a month-long series of cold fronts to arrive in southwest Western Australia will bring a range of severe weather to the most populated regions within the state starting Monday, July 26, 2021. This front is expected to be windier than a typical front...

A massive landslide caused by heavy rains hit Kinnaur District in the Indian state of Himachal Pradesh on July 25, 2021, claiming the lives of 9 people and injuring 3. All of them were tourists from Delhi. Videos of the event show massive rocks tumbling down a...