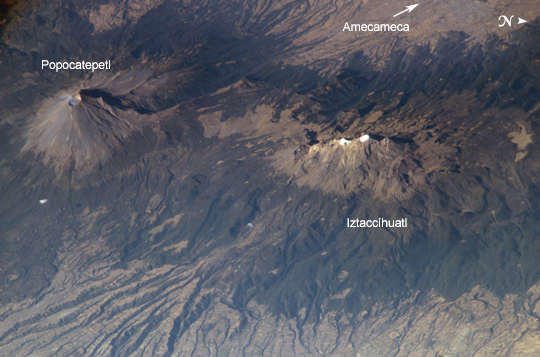 The Popocatepetl volcano that towers over Mexico City began rumbling again Friday, shooting a blast of ash about 2 miles (3 kilometers) above its crater at dawn.

The ash cloud drifted first to the west and then turned back east toward the city of Puebla, Mexico’s national disaster prevention agency said. The 17,886-foot (5,450-meter) mountain shook for several minutes before the ash burst out.

The agency urged people to stay at least 7 miles (12 kilometers) from the crater, which is about 40 miles (65 kilometers) southeast of Mexico’s capital. Puebla state civil defense Director Jesus Morales told a local television station that the cloud “has a high ash content, but it doesn’t represent a risk.“

Authorities warned residents in the region that they shouldn’t wet down any ash that falls before sweeping it away. (SacBee)

Popocatepetl is an active volcano and, at 5,426 m (17,802 ft), the second highest peak in Mexico after the Pico de Orizaba (5,636 m/18,491 ft). Popocatepetl is linked to the Iztaccihuatl volcano to the north by the high saddle known as the Paso de Cortés, and lies in the eastern half of the Trans-Mexican volcanic belt.

Popocatepetl is 70 km (43 mi) southeast of Mexico City, from where it can be seen regularly, depending on atmospheric conditions. The residents of Puebla, a mere 40 km (25 mi) east of the volcano, enjoy the views of the snowy and glacier-clad mountain almost all year long. The volcano is also one of the three tall peaks in Mexico to contain glaciers, the others being Iztaccihuatl and Pico de Orizaba. Magma erupted from Popocatepetl is a mixture of dacite and basaltic andesite.

Popocatepetl sends a plume of volcanic ash south on January 23, 2001, with Iztaccíhuatl at right. View from the International Space Station.

Popocatepetl is one of the most violent volcanoes in Mexico, having had more than 15 major eruptions since the arrival of the Spanish in 1519. A major eruption occurred in 1947 to begin this cycle of activity. Then, on December 21, 1994, the volcano spewed gas and ash which was carried as far as 25 km (16 mi) away by prevailing winds.The activity prompted the evacuation of nearby towns and scientists to begin monitoring for an eruption. In December 2000, tens of thousands of people were evacuated by the government based on the warnings of scientists. The volcano then made its largest display in 1,200 years.

According to paleomagnetic studies, the volcano is about 730,000 years old. Elevation 5,450 m (17,880 ft) in cone form with a diameter of 25 km (16 mi) at its base and the crater has an elliptical shape with an orientation northeast-southeast. the walls of the crater oscillate between 600 to 840 m (2,000 to 2,760 ft). Popocatépetl is currently active after being dormant for about half of last century. In 1991 the volcano’s activity increased and since 1993 smoke can be seen constantly emanating from the crater.

There is a large record of the volcano’s activity throughout antiquity. In 1927 an eruption was artificially triggered by the use of dynamite in the crater for sulfur extraction. The last violent eruption was registered in 2000. on December 25, 2005, the volcano’s crater produce and new explosion which ejected a large column of smoke and ash about 3 km (1.9 mi) into the atmosphere and expulsion of lava. 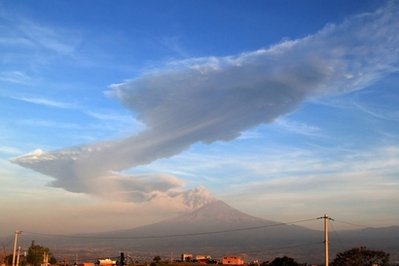