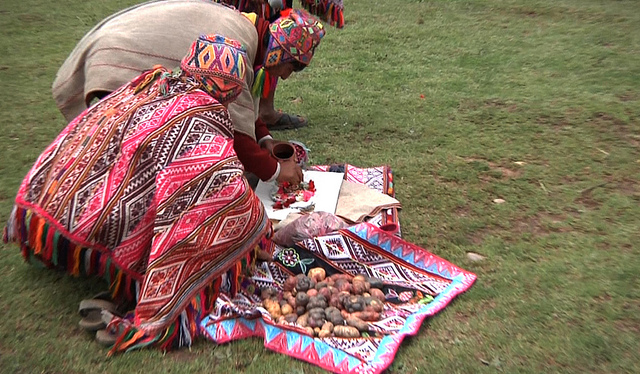 On April 15 peruvian president Alan García signed a decree allowing the import and planting of genetically modified organisms (GMOs) in the country. The official decree puts at risk the genetic diversity of the Peruvian Andes, including the tuberous crop we know as potato. The fourth most important crop in the world, potato was first domesticated in Peru about 10,000 years ago. And while western households may take them for granted, they are now inextricably tied to Quechua identity, much like corn to the Maya or Reindeer to the Saami.

Earlier this year, the Quechua People in the Peruvian state of Cusco, launched an ambitious plan to send 1,500 varieties of Potato to the Svalbard Global Seed Vault in the Arctic Circle. It was first time Indigenous Peoples ever contributed to the underground vault, which already houses more than 90,000 seed samples from around the world.

“Cusco is the center of origin of the potato, with the highest diversity of potato varieties found anywhere in the world. As guardians of the potatoes, Andean communities have, within challenging political contexts that favor international commercial interests, fought to protect their biocultural heritage. These actions have been supported by local governments, such as the Cusco regional government, and have led to five regions producing decrees that prohibit the use of GMOs … All that has been accomplished over the last 10 years of actions against GMOs in order to protect Peru’s high-quality natural, non-GMO crops is now being threatened,” Alejandro Argumedo of ANDES said in an email message to SLFP.

Many opponents argue that the country hasn’t conducted enough research and development in the field, and they are asking for a 15-year moratorium on GMOs, to give Peru more time to build the research infrastructure needed to fully assess and make the best decisions on the use of GMO crops. 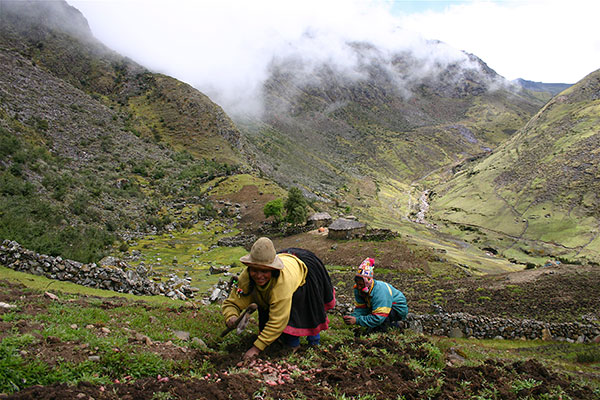 Peru’s Congress is expected to discuss just such a moratorium in a new proposed bill. Meanwhile, Peru’s Minister of Agriculture Rafael Quevedo recently resigned in the heat of criticism over his support of GMO crops and his position as director of a company that uses them.

Potatoes and GMOs aren’t the only concern in the Peruvian Andes.  Leaders from the Quechua community of Q’eros recently blocked geneticists from collecting DNA samples from their community as part of National Geographic’s ongoing Genographic Project, which has been gathering DNA from people around the world.

The Genographic Project, which aims to  collect, analyze and store 100,000 DNA samples of Indigenous peoples worldwide to study human origins and migrations has been long viewed with suspicion and mistrust by Indigenous Peoples. According to a communique from the Asociación para la Naturaleza y el Desarrollo Sostenible (ANDES), a Cusco nonprofit, the U.S.-based project did not consult with local or regional authoritiest.

The letter, released by ANDES, invited families to come to a “fun” presentation on the study, which would include “a projector and pretty pictures,” in an effort to encourage them, young and old alike, to offer their DNA samples. “The benefit,” the letter said, “is that the people of Q’eros can know their ancestral roots … You can learn about your origin from centuries and centuries ago.”

Benito Machacca Apaza, president of the Hatun Q’eros community, responded in an ANDES press release that, “The Q’ero Nation knows that its history, its past, present, and future, is our Inca culture, and we don’t need research called genetics to know who we are. We are Incas, always have been and always will be.“

A Q’eros delegation brought their concerns to officials in Cusco, who ultimately agreed with them – according to ANDES, marking the first occasion that a local government in Peru applied an ordinance “in defense of its citizen’s genetic integrity.” The officials said that the GP expedition had violated a local ordinance on biological diversity that requires notarized evidence of informed prior consent, along with other documents, before collecting DNA.

Following the decision, the Genographic Project cancelled their visit until they can “find out exactly what happened.” (IntercontinentalCry)

Untitled from andes on Vimeo.

Sacred Valley of the Incas to Send Some 1,500 Potato Varieties to Svalbard Global Seed Vault in Arctic Circle (ANDES)