The north-west coast of the U.S. could be devastated by a huge movement of undersea plates known as a ‘megathrust’ earthquake, scientists say. A review of the dangers posed by the Juan de Fuca plate released in the wake of the Japanese quake has raised fears that the Pacific seaboard could be similarly ravaged.

The horrifying possibilities have been brought to light by data researched by the Active Tectonics and Seafloor Mapping Laboratory at Oregon State University. And the results are shown in a documentary, Megaquake: The Hour That Shook Japan, which is set to go out on the Discovery Channel in the UK this weekend.

The huge March 11 earthquake that sparked the tsunami off the coast of Japan may have been a ‘megathrust’ quake and now researchers fear the Cascadia fault line 50 miles off the U.S. coast could rupture and cause a quake and subsequent tsunami. The average time along that fault between massive quakes above magnitude 8 is 240 years, said The Times, and the last ‘megaquake’ was just over 300 years ago.

‘Megathrusts’ are the world’s largest earthquakes, and happen in a ‘subduction zone’, a region where one of the earth’s tectonic plates is thrust under another. The last one involving Cascadia was estimated at magnitude 9 on the Richter scale, according to Natural Resources Canada.

The Juan de Fuca plate is being forced under the North America plate along the Cascadia fault and, as large parts of the plates are locked together, stress is being built up until an eventual breakage causes a massive earthquake. 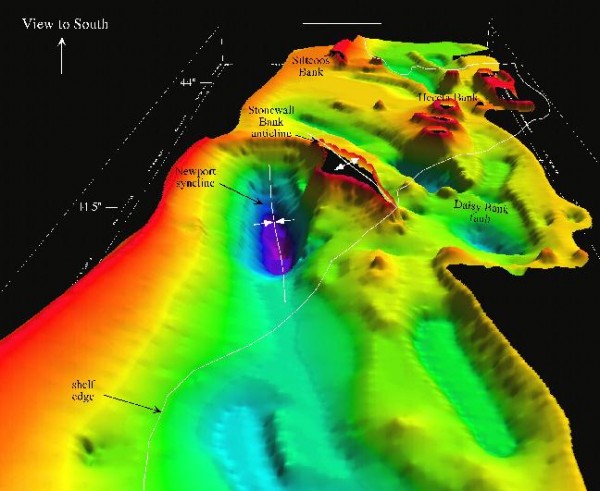 Professor Chris Goldfinger, director of the Laboratory at Oregon State University, told the newspaper that their information showed an increase in pressure at the plates: ‘It’s loading a spring for a future earthquake, there’s no doubt about that.’

And geologist Jeffrey Park, director of the Yale Institute for Biospheric Studies, said in a recent – separate – article: ‘History tells us that more megathrust earthquakes could occur in the next decade, but we have no evidence that the recent rate of nearly one megathrust per year will persist for longer than that.’ 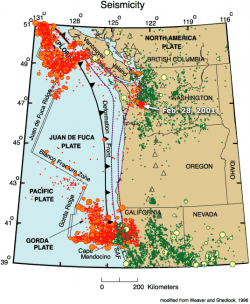 Cascadia, which stretches from Vancouver island to northern California, has been dormant for over 300 years but scientists now believe there is a 45 per cent probability of an earthquake of an 8.0 magnitude or higher in the next 50 years. They add there is a 15 per cent chance of magnitude 9 or more.

Such a quake could produce a massive tsunami and engulf the Pacific Northwest coast, affecting Oregon, Washington state and Vancouver Island, according to The Times, with a tsunami with waves of up to 30metres high and potentially reaching Japan.

The threat is all the more serious as several cities in the north-west of the U.S. are not adequately prepared for the type of devastation a ‘megathrust’ quake could wreak.

An upgrade programme is currently underway to protect the settlements most at risk.

Skyscrapers built in Seattle before 1994 – prior to more stringent building regulations – would be liable to collapse and countless small coastal communities could be swept away due to flooding. Some 1,000 schools in Oregon are reportedly judged to have poor resistance to eruptions, but the refurbishment is not set to be completed until 2032.

However, experts are unable to be specific about when a quake could hit. 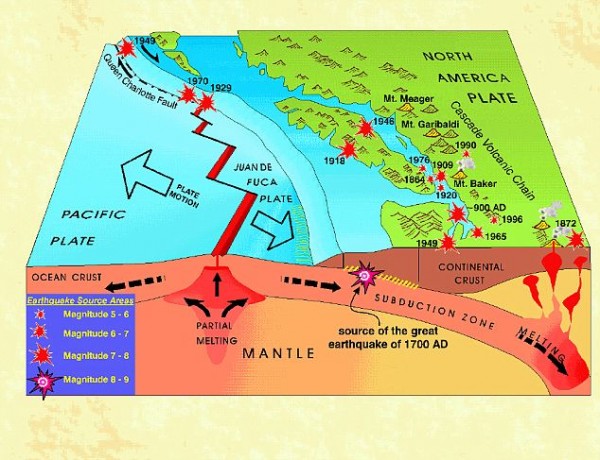 ‘We don’t know how to tell you, “Hey, next week, you know, get out of town there’s going to be a big earthquake”,’ Tom Jordan, director of the Southern California Earthquake Centre, told The Times.

John McCloskey, Professor of Geophysics at the University, added: ‘The problem with using a recurrence timeline is that earthquakes can be more like buses, coming two or three at a time rather than regularly.

‘We need a vision of what the biggest quake is likely to be in a region and then protect against that.’ (DailyMail) 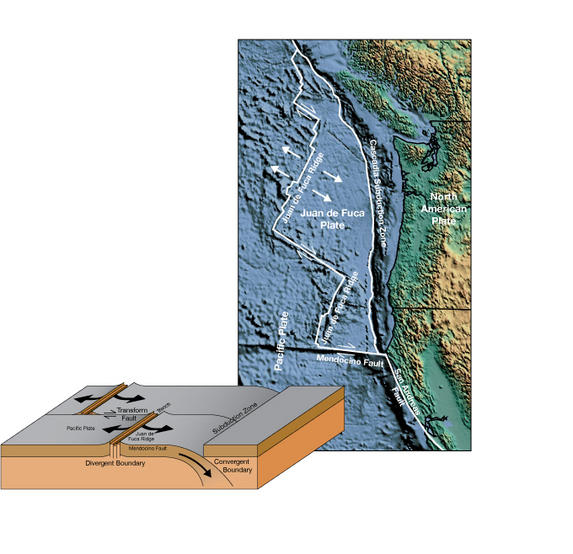