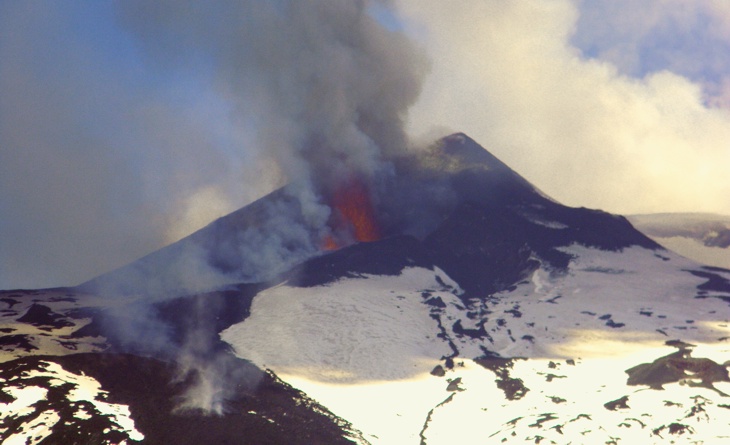 Istituto Nazionale di Geofisica e Vulcanologia (INGV) reports about the third paroxysmal eruptive episode of the year 2011 from the pit crater on the east flank of the Southeast Crater cone occurred on 10 April, 51 days after the previous paroxysm on 18 February. The event was essentially a repetition of its predecessors, with a lava flow probably exceeding 3 km in length, generation of a tephra and gas column, and intense lava fountaining.

During the night between 9 and 10 April, the Strombolian activity within the pit crater gradually increased, as did the volcanic tremor amplitude recorded by the INGV-Catania seismic network. The lava flow produced by the overflow initiated on the evening of 9 April advanced very slowly, and at sunrise on 10 April had not yet reached the steep western slope of the Valle del Bove.

During the forenoon of 10 April, the eruptive phenomena rapidly intensified, and a further significant increase in the volcanic tremor amplitude was observed, which culminated around 09.30 GMT (local time -2), with vigorous lava fountaining and the rise of an ash and gas column, which was blown by the wind to the southeast, causing ash falls in a sector between Trecastagni, Fleri, Zafferana, Aci S. Antonio, Acitrezza, Acicastello and Acireale. In this same interval, the rate of lava emission increased dramatically, producing a new flow that covered its predecessor before spilling down into the Valle del Bove, following essentially the same path as the lava flows of 12-13 January and 18 February. On its path, the lava flow locally encountered thick snow cover, which lead to violent explosive interaction that generated spectacular columns of vapor and ash. 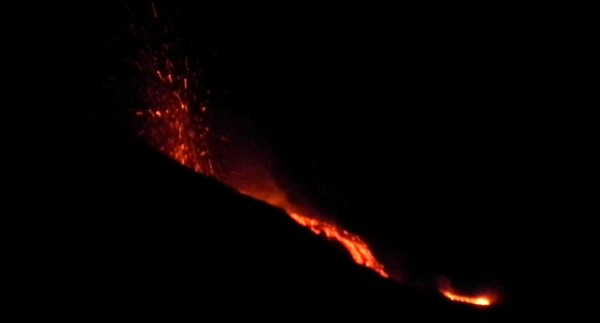