Storm Eunice is currently developing over the Atlantic Ocean and is already deepening as it rapidly approaches the United Kingdom, forcing the UK Met Office to issue a rare Red Weather Warning. Eunice is expected to bring extremely strong winds and continued disruption for much of the U.K. on Friday, February 18. This is the most powerful storm to hit the southern U.K. over the past couple of years.

Eunice will end up as even more powerful than Storm Dudley which brought widespread disruption to northern parts of the U.K. during Wednesday night, February 16, Met Office meteorologist Aidan McGivern said.

"It might be relatively calm on Thursday evening, but quite quickly during the early hours of Friday as this powerful storm approaches those winds will rapidly ramp up. The strongest winds will be to the south of Eunice as it tracks eastwards across the U.K."

The Red Weather Warning for wind covers southwest coastal areas of the UK, where the most significant gusts in exposed areas could be in excess of 145 km/h (90 mph) from early Friday morning. Further inland and within the wider Amber Warning area, gusts will still be significant and damaging for many, with 110 – 130 km/h (70 – 80 mph) gusts possible.1

With such severe weather impacting the UK, people should stay up to date with the latest warnings as they could be updated, officials at the Met Office said.

Red weather warnings are rarely issued by the Met Office, with the last one coinciding with Storm Arwen in November 2021, but you’d have to go back to March 2018 for the last red warning for wind before that.

The wider Amber Warning area highlights the ongoing risk of high impacts such as disruption to power, travel and other services. Damage is also likely for buildings and trees, with beach material being thrown providing another risk near coastlines.

The warnings reflect the expected track of Storm Eunice eastwards across the central portion of the U.K., with the strongest winds expected to the south of Eunice. On the northern flank of Storm Eunice, there’s a risk of snow for some in Northern Ireland, northern England and southern Scotland.

A Yellow Warning has been issued for snow, highlighting possible blizzard conditions for these areas. Much of the snow will be confined to the high ground within the warning areas, with up to 20 cm (7.9 inches) possible in the Pennines. There remains a risk of some snow to lower ground, although with less significant accumulations. 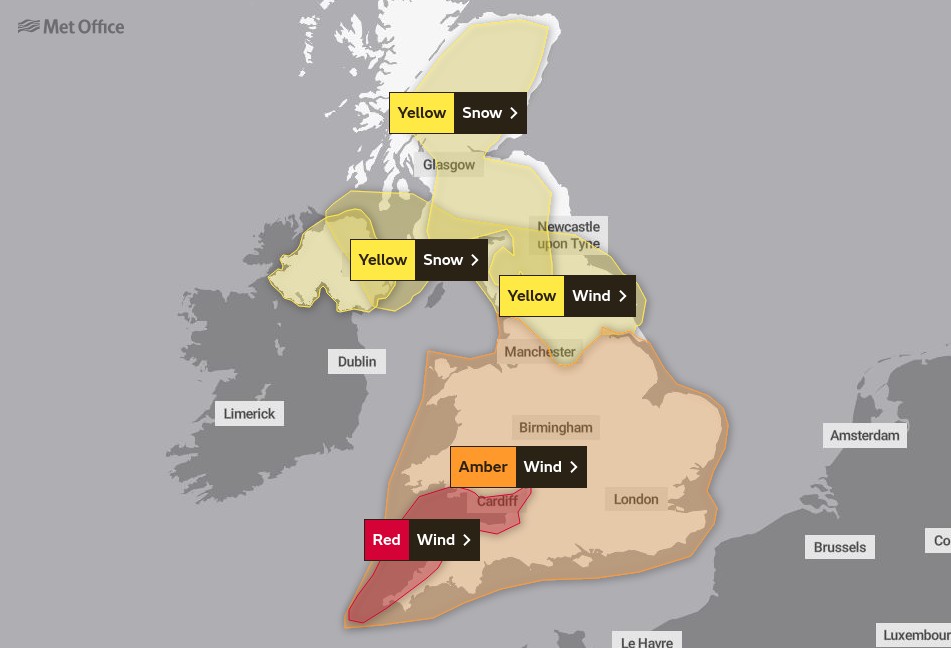 "After the impacts from Storm Dudley for many on Wednesday, Storm Eunice will bring damaging gusts in what could be one of the most impactful storms to affect southern and central parts of the U.K. for a few years," Met Office Chief Meteorologist Frank Saunders said.

"The red warning area indicates a significant danger to life as extremely strong winds provide the potential for damage to structures and flying debris."

Strong winds could also bring coastal flooding to parts of the west, southwest and south coast of England, as well as the tidal River Severn, in the early hours of Friday morning. This is due to high waves and potential storm surge coinciding with the start of a period of spring tides.

"We’re encouraging drivers to check the latest weather and travel conditions before setting off on journeys and consider if their journey is necessary and can be delayed until conditions improve," National Highways Head of Road Safety, Jeremy Phillips, said. "If you do intend to travel, then plan your trip and take extra care, allowing more time for your journey.

"In high winds, there’s a particular risk to lorries, caravans and motorbikes so we’d advise drivers of these vehicles to slow down. Drivers of other vehicles should be aware of sudden gusts of wind which can affect handling and braking, and give high-sided vehicles, caravans, and motorbikes plenty of space. In the event of persistent high winds we may need to close bridges to traffic for a period, so please be alert for warnings of closures and follow signed diversion routes."

#StormDudley brought some very strong #winds to parts of the UK over the last 24 hours. Here are the highest reported wind gusts pic.twitter.com/rH8TMzoEdx

Eunice is coming on the heels of Storm Dudley that brought high winds for many in the U.K. on Wednesday and into Thursday, February 17.

Provisional figures show the highest gust was recorded at Capel Curig in Wales at 130 km/h (81 mph).