A shallow M6.0 earthquake struck Little Antelope Valley, California, near the Nevada border at 22:49 UTC on July 8, 2021 (15:49 LT). This is the largest earthquake to hit California since the July 2019 Ridgecrest earthquake.

The epicenter was located about 32 km (20 miles) SW of Smith Valley, Nevada, and 32 km SE of Markleeville, California.

"Perceived shaking for the quake was very strong. The event was widely felt, with over 25 000 'Did You Feel It?' reports thus far submitted," the USGS said.

"Preliminary focal mechanism solutions for the event, which describe the style of faulting in an earthquake, indicate slip likely occurred on a moderately dipping fault striking roughly north-south," the agency said.

"This motion is consistent with east-west oriented extension that is common in Nevada and eastern California. The earthquake occurred along the eastern edge of the Sierra Nevada, a major physiographic boundary along the California-Nevada border."

The event occurred at the margin of the stable Sierra Nevada microplate and the Walker Lane, a zone of distributed shear.

The microplate moves at about 12 mm/yr (0.5 inches per year) to the northwest relative to the North American plate. It is a part of the broader Pacific-North America plate boundary system of California, and roughly 25% of the 5 cm/yr (2 inches) total plate boundary motion occurs east of the Sierra Nevada. 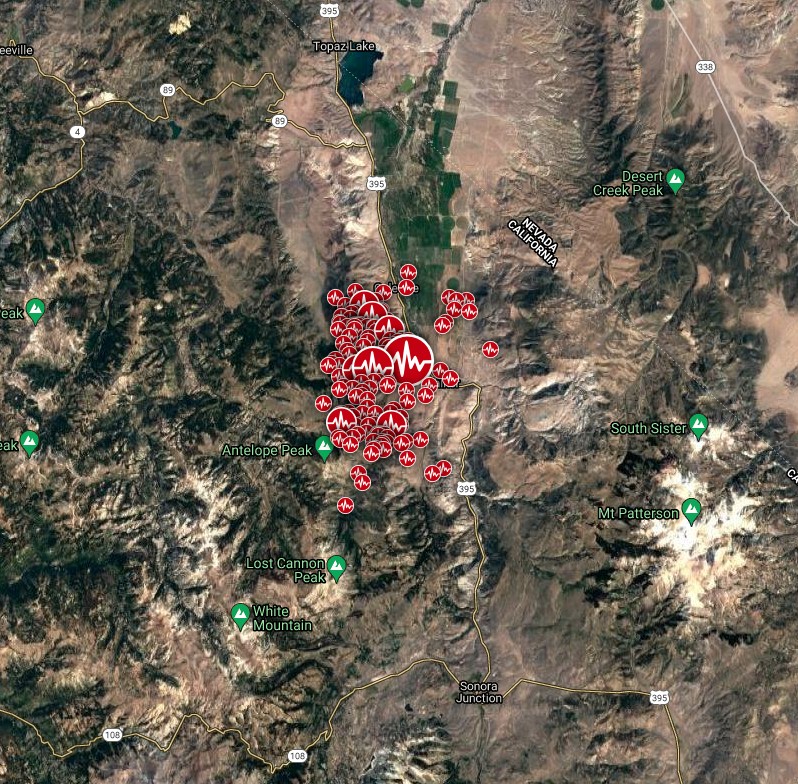 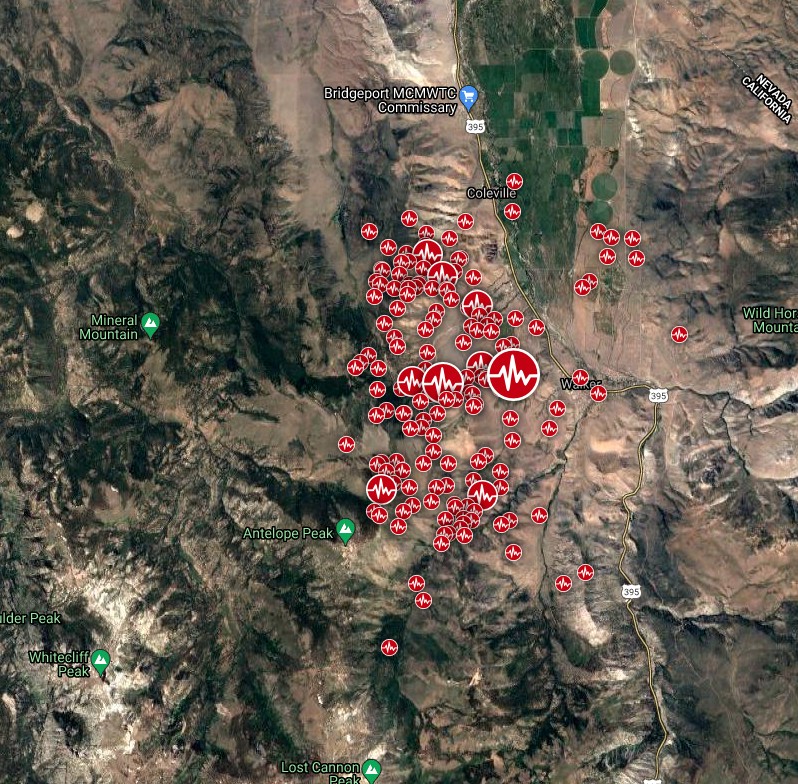 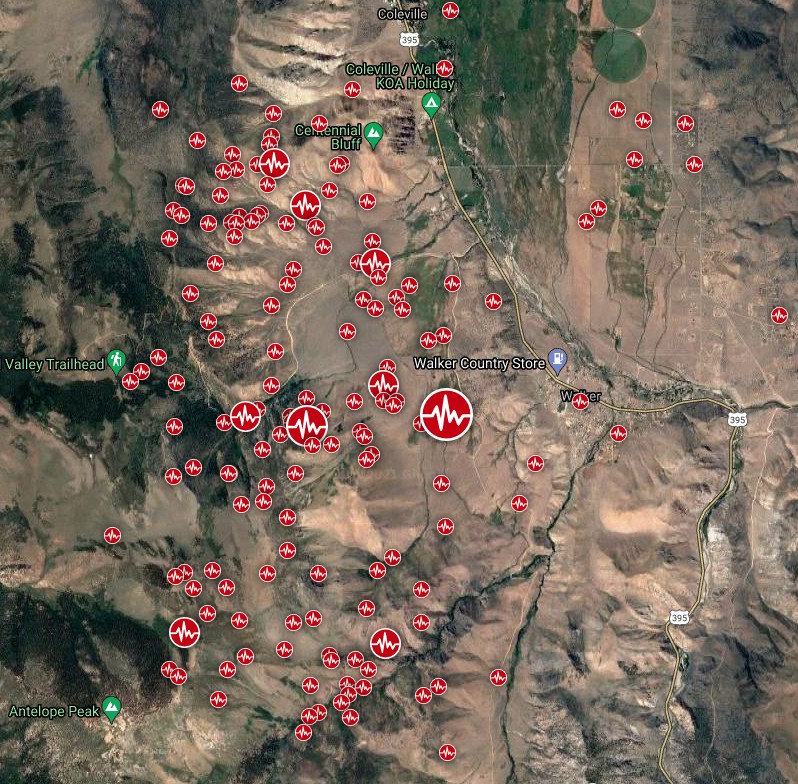 Numerous large boulders tumbled down mountainsides and forced the police to close a stretch of California Highway 395 near Coleville — about 25 km (40 miles) of the road, from near the Willow Springs in Mono County north to the Nevada border. I395 is a major route through the northern Sierra Nevada.

Earthquake hit us on I395 near Coleville, CA! Boulders all over the road! #earthquake #California #roadtrip @ABC pic.twitter.com/ZoTxLnC6r8

Boulders everywhere after earthquake on i395 #earthquake #california #roadtrip pic.twitter.com/Bdw4he17ni

More info: This is called Centennial Bluff which is west of HWY 395. Here is a picture of a boulder that came down. Complete coverage right now on @nbcbayarea pic.twitter.com/h6I0LlHrMz

"While there are no preliminary reports of damage or injuries, this is a rapidly evolving situation and more details will emerge in the coming hours," California OES posted on Twitter on July 9. "We are working closely with local officials to ensure they have the resources and support to rapidly respond to these earthquakes."

ESA's Sentinel-1 satellite has mapped changes in distance to the ground surface.

"In the absence of surface rupture along faults (this earthquake may not have reached the surface), we rely on satellite imaging, as well as detailed location of aftershock hypocenters, to determine which exact fault produced this earthquake. Results like this show rupture could be on an unmapped southern section of Slinkard Valley fault, with some deformation along a cross fault at the back of Little Antelope Valley. Some apparent offset in fringes may also line up with the Antelope Valley fault (north of Coleville)." 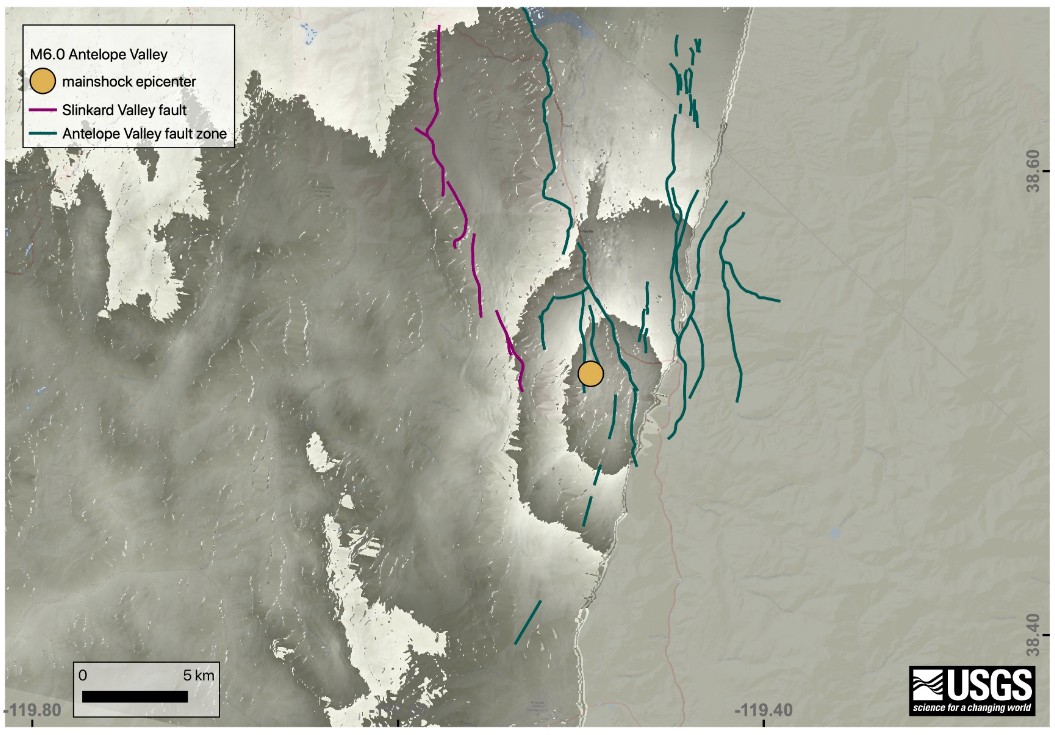 The USGS advises everyone to be aware of the possibility of aftershocks, especially when in or around vulnerable structures such as unreinforced masonry buildings.

There is a 1 % chance of one or more aftershocks that are larger than magnitude 6.0 over the next 7 days. It is likely that there will be smaller earthquakes, with 4 to 27 magnitude 3 or higher aftershocks.

Magnitude 3 and above are large enough to be felt near the epicenter.

The number of aftershocks will drop off over time, but a large aftershock can increase the numbers again, temporarily.