Ireland is facing a mysterious spate of dolphin and whale strandings as the numbers reach record high again. The number of strandings during the winter period in the country has increased significantly since 2011.

In 2019, the Irish Whale and Dolphin Group (IWDG) received 70 reports of animals washing up on the Irish coast during the winter months, which was unprecedented.

However, in January and February 2021, there have already been 93 records of stranded cetaceans, comprising 8 different species. This represents the highest number ever recorded in that time period. Four of the animals were refloated after efforts from volunteers, but 89 died.

The strandings are isolated mainly among the west and southwest coasts. 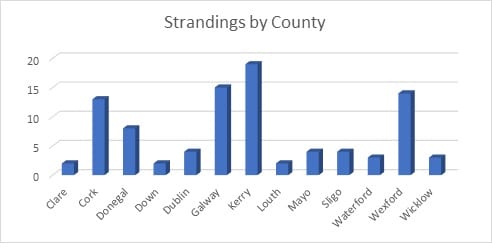 Common dolphins are the most usual species found, making up more than two-thirds of the carcasses this year alone. 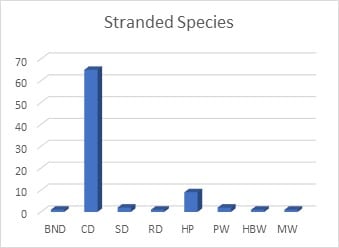 In some cases, people who discover dolphin carcasses believe that those were the remains of Fungie, a bottlenose dolphin that lived in very close contact with humans in Dingle, on the southwest coast of Ireland.

One in 10 had obvious signs of being caught in nets, three had their tails cut off, three suffered broken jaws, and one was caught in a net.

According to IWDG, the number of strandings during the winter period has increased significantly since 2011. These strandings have been dominated by common dolphins.

"Although historically the IWDG have identified January to March as a peak stranding period for common dolphins, 2021 figures are already proving to be quite high compared to the same period in previous years," said IWDG Strandings Officer Stephanie Levesque.

Winter Peak in Common Dolphin Strandings – the highest yet recorded by the IWDG. Strandings Officer Stephanie Levesque reports on strandings during the first two months of 2021, and puts these numbers into some historical context. Read the full story at https://t.co/fqzka0a8ga pic.twitter.com/rK4kF60fhE

There are most likely several factors affecting this increase in reported strandings, and although we are not sure exactly what is causing it, a number of factors must be taken into account, Levesque said.

"As the entire country found itself in lockdown, and was spending significantly more time walking the local shores during the peak stranding period, there was bound to be more reporting taking place," she said.

This is suggested by animals being found in fresher condition compared to previous years, possibly because they were being found sooner than they would have been in 'normal' times.

Of all cetaceans reported, 70% were classed as 'fresh' or 'very fresh,' compared to 39% this time last year.

In addition, the IWDG had a high social media reach in recent months and perhaps more people are inclined to report these strandings.

There is also 'increasing evidence of a broad-scale movement of common dolphins from deep offshore waters into shelf edge waters within the NE Atlantic and IWDG Sightings Officer Pádraig Whooley has noted more common dolphin sightings reported off the coast of Ireland this winter, and where you have more dolphins, it likely leads to more strandings.'