The storm had a minimum central pressure of 970 hPa at the time of landfall and was moving NNE at 22 km/h (14 mph).

This is the second hurricane to hit the same region of Louisiana in 43 days, after Laura on August 27. Delta landed just 22 km (14 miles) east of Cameron, where Laura made landfall.

While storm surge inundated coastal areas, powerful winds downed trees and powerlines, leaving more than 641 000 customers in Louisiana, Texas and Mississippi are without power, as of 06:30 UTC on October 10.

At least 5 Louisiana Parishes issued mandatory evacuation ahead of landfall, including Calcasieu and Cameron.

As of 03:00 UTC on October 10, Delta was moving toward the NNE near 15 mph (24 km/h), and this motion is expected to continue through Saturday morning, followed by NE motion through Sunday night.

On the forecast track, the center of Delta should move across central and northeastern Louisiana tonight and Saturday morning. After that time, the system is forecast to move across northern Mississippi and into the Tennessee Valley. 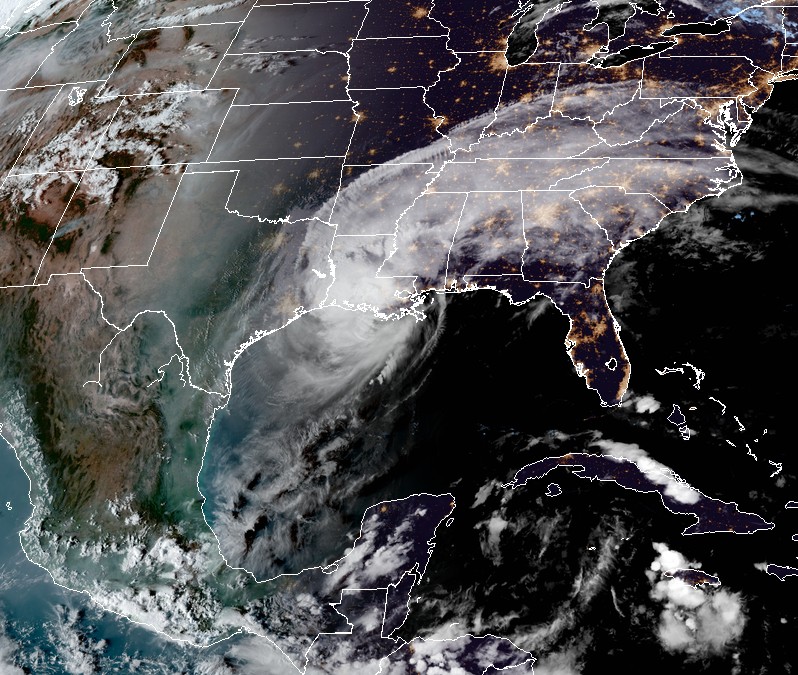 Delta weakened into a tropical storm at 06:00 UTC. At the time, its center was located about 25 km (15 miles) ESE of Alexandria, Louisiana. 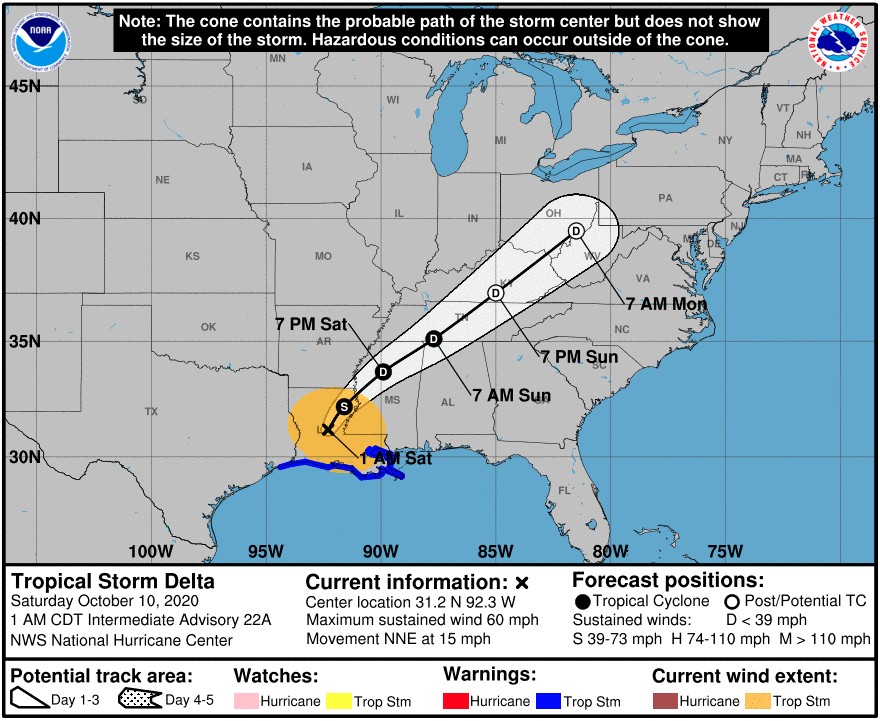 Delta is the first Category 2+ hurricane to make landfall in Louisiana in October since Category 2 Hurricane "Hilda" in 1964.

Delta is the 5th hurricane to make landfall in CONUS this year, along with Hanna, Isaias, Laura, and Sally.

This is the most CONUS hurricane landfalls in a single Atlantic hurricane season since 2005.

Delta is also the 2nd hurricane to make landfall in Louisiana this season, after Laura. 2020 is now is the first year with multiple hurricane landfalls in Louisiana since 2005. Cindy, Katrina and Rita made landfall that year.

Map showing the landfall location for all 10 continental US landfalling named storms of 2020 to date. #Delta and #Laura made landfall extremely close to each other. pic.twitter.com/XdTFbl8G5Q

#Delta has made landfall in Louisiana. This marks a record 10th named storm landfall on the U.S. mainland, and the fifth hurricane (second-most). Prior to Delta's landfall, 2020 U.S. tropical cyclones had caused at least $26B in direct economic loss or damage (subject to change). pic.twitter.com/cQGTRfCaTg