Astronomers at the Harvard-Smithsonian Center for Astrophysics reported spatially-resolved observations of the regions of the Sun's magnetic field and flare-ejected electron activity, with the results suggesting that these kinds of spatial structures in the field are the main locations for accelerating and channeling the fast-moving electrons into interplanetary space.

The Sun's corona– its hot, outermost layer, produces a wind of charged particles. Transient events have been known to trigger huge eruptions of high-energy charged particles into space, some of which affect the Earth, producing auroras and even disrupting global communications.

One of the issues that have left astronomers puzzled for long is how the Sun produces such high-energy particles. Solar flares or other kinds of impulsive events are believed to be key mechanisms.

The hot gas is ionized, producing an underlying sheet of circulating current that creates powerful magnetic field loops. When these loops break, they can emit pulses of charged particles.

Where and how the energy is released locally, as well as how the particles are accelerated, remained uncertain because the magnetic properties of the huge-scale current sheet have not been measured at sizes small enough to correlate with the domains of flaring activity.

Chengcai Shen, Katharine Reeves, and a team of their collaborators used the 13 antenna array at the Expanded Owens Valley Solar Array (EOVSA) and the microwave imaging techniques to observe a giant solar flare on September 2017.

As the event progressed, they witnessed a rapidly ascending dark cavity, corresponding to twisted magnetic field lines rising, breaking, and spewing electrons as viewed along the axis of the field lines. 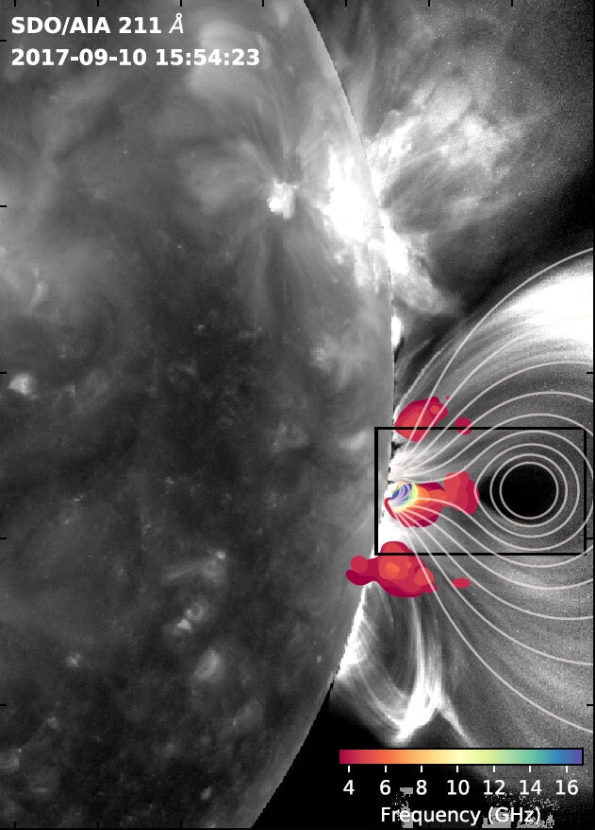 The scientists were able to model the details of the configuration. By estimating the strength of the magnetic field, as well as the plasma flow's speed, they identified hat this one flare alone released during its peak few minutes, about 0.02 percent of the energy of the entire Sun.

The findings indicate that these kinds of spatial structures in the field are the primary locations for accelerating and channeling the rapid-moving electrons into interplanetary space and demonstrate the power of these new, spatially-resolved imaging techniques.

In the standard model of solar flares, a large-scale reconnection current sheet is postulated as the central engine for powering the flare energy release and accelerating particles. However, where and how the energy release and particle acceleration occur remain unclear due to the lack of measurements for the magnetic properties of the current sheet. Here we report the measurement of spatially-resolved magnetic field and flare-accelerated relativistic electrons along a current-sheet feature in a solar flare. The measured magnetic field profile shows a local maximum where the reconnecting field lines of opposite polarities closely approach each other, known as the reconnection X point. The measurements also reveal a local minimum near the bottom of the current sheet above the flare loop-top, referred to as a "magnetic bottle". This spatial structure agrees with theoretical predictions and numerical modeling results. A strong reconnection electric field of ~4000 V/m is inferred near the X point. This location, however, shows a local depletion of microwave-emitting relativistic electrons. These electrons concentrate instead at or near the magnetic bottle structure, where more than 99% of them reside at each instant. Our observations suggest that the loop-top magnetic bottle is likely the primary site for accelerating and/or confining the relativistic electrons.