A new study found that big glaciers were repeatedly present in most of the major mountain areas along the Mediterranean– from Morocco in the west, to the Black Sea coast of Turkey in the east– during the Pleistocene era, or the first epoch of the Quaternary period that lasted from about 2.5 million to 11 700 years ago.

The Mediterranean mountains were frequently glaciated during the Pleistocene period. Massive glaciers were present in much of the major mountain areas, and some mountains were found to had supported extensive ice caps and ice fields with valley glaciers about 10 km (6 miles) long. Meanwhile, other massifs supported only small-scale ice masses.

According to the researchers, the Mediterranean mountains are fundamental for research about the paleoclimate due to their position in the mid-latitudes and susceptibility to changes in the climate regimes of adjoining areas, including the North Atlantic.

Glacial processes have been key agents of long-term landscape modification and classic glacial landscape has been documented across the region.

As in various parts of the world, the impact of these glaciers was not limited to the uplands because meltwaters carried huge volumes of outwash sediment through the downstream reaches of river basins. This glacial sign can be traced to the Mediterranean coast and offshore.

The geomorphological and sedimentological glaciation record in these mountains is now giving important data on past climates because the feasibility of glaciers is closely related to atmospheric air temperatures and moisture supply. 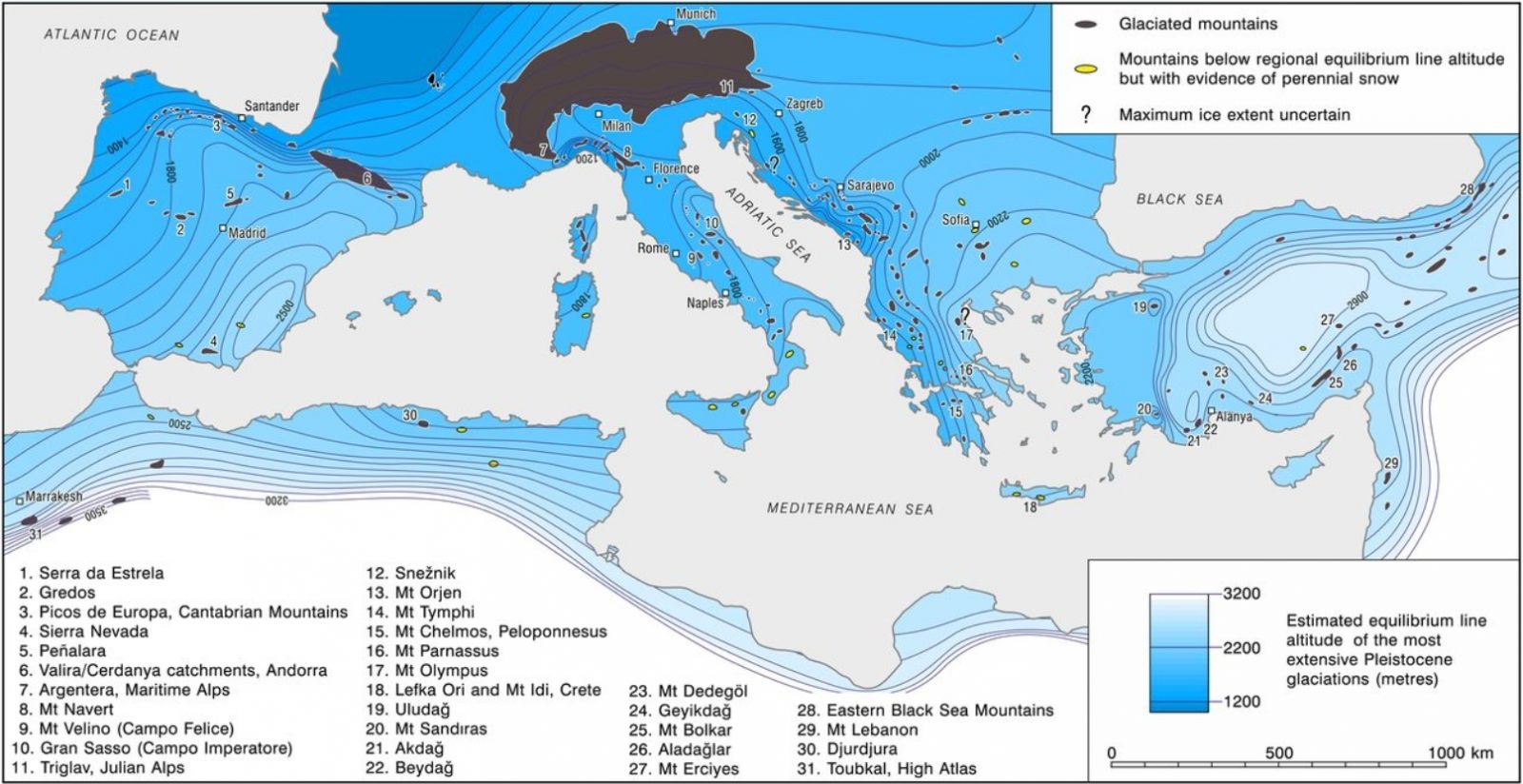 The Mediterranean region is located in an important position for studying and understanding Quaternary climate change in the northern hemisphere. The basin, lying to the east of the North Atlantic Ocean and adjacent to the low mid-latitudes, is a vital corridor for westerly atmospheric circulation between the Alps and the Sahara Desert.

At present, moisture-bearing atmospheric depressions– produced both in the Mediterranean basin and the North Atlantic Ocean– are able to penetrate to central Asia. This situation might have been more marked during the cold stages in the Pleistocene period when both the atmospheric and oceanic polar fronts were further south compared to today.

The researchers noted that the Mediterranean mountains represent dynamic landscape systems that are highly sensitive to climate change, mentioning that there is a large body of evidence showing that the mountainous peninsulas of southern Europe and North Africa hosted biotic refugia during Pleistocene.

"The presence of glaciers in these refugial centers during Pleistocene cold stages has important implications for moisture supply as well as temperature; large glaciers in the uplands would have limited the availability of ‘temperate’ refugial sites in topographically sheltered sites such as valley floors," the researchers wrote.

The researchers said they hope to set out a new agenda by discussing progress, problems, and prospects for the study of Mediterranean mountain glaciations.

The Mediterranean mountains were repeatedly glaciated during the Pleistocene. Glaciers were present in most of the major mountains areas from Morocco in the west to the Black Sea coast of Turkey in the east. Some mountains supported extensive ice caps and ice fields with valley glaciers tens of kilometers long. Other massifs sustained only small-scale ice masses, although this was the exception rather than the norm. Glaciers still exist today and there is evidence that small glaciers were a common sight in many regions during the Little Ice Age. The Mediterranean mountains are important for palaeoclimate research because of their position in the mid-latitudes and sensitivity to changes in the climate regimes of adjacent areas including the North Atlantic. These mountains are also important areas of biodiversity and long-term biological change through the Quaternary ice age. All of this provided challenges and opportunities for Palaeolithic societies. This paper reviews the history of the study of glaciation in the Mediterranean mountains from pioneer nineteenth-century observations through to the detailed geomorphological mapping and advanced geochronological datasets of recent times. We also review the current state of knowledge to frame the contributions presented in this volume. Lastly, this new synthesis then identifies outstanding research problems and assesses the prospects for new studies of glaciation in the Mediterranean mountains.