In the Earth's equatorial regions today, the seasonal cycle of the monthly mean surface air temperature is less than 10 °C (50 °F). However, deep sand wedges discovered near the paleo equator in the Marinoan glaciogenic deposits at 635 million years ago, which points to a large seasonal cycle, probably more than 30 °C (86 °F). Theoretical calculations for these seasonal cycles show that the deep sand wedges form readily in a snowball Earth and hardly in a waterbelt Earth.

Deep sand wedges have been recognized in the Marinoan glacial strata on different continents– a number of which likely formed at very low paleo altitudes. These form when the cold brittle ground is rapidly cooled. The open cracks are filled with windblown sands under dry conditions. Thus, both cold yearly mean temperature and large seasonal cycles are necessary for deep sand wedges to form.

On the present-day Earth, deep sand wedges only form in high latitudes. Based o the geographical distribution of present-day sand wedges, the amplitude of the seasonal cycle needed to form such has been estimated to be up to 30 °C (86 °F). Sand wedges near the paleo equator mean that the equatorial region during the Marinoan was dry and cold and had a large seasonal cycle.

"Our model shows that an equatorial ASC of much greater than 20 °C (68 °F) can be achieved for a snowball Earth when the orbital parameters of the Earth are varied even just within the range of those of the Pleistocene," the researchers said.

"The ASC of surface air temperature is largely constrained by the seasonal cycle of local solar insolation and the heat capacity of the surface."

It is found that the snowball Earth climate takes at least a few hundred years to reach equilibrium; the pattern of snow depth takes a long period to stabilize due to the weak hydrological cycle. 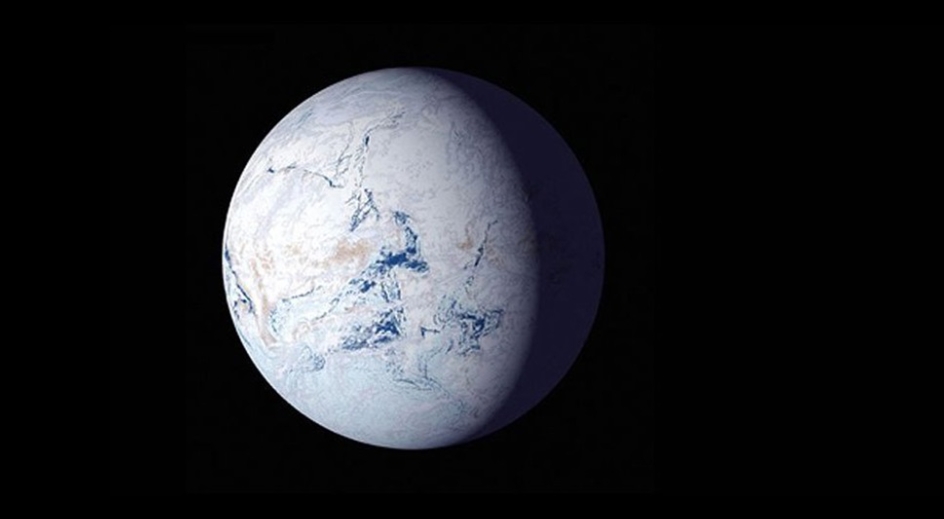 "For example, entire tropical continents may not be ice-covered in the very early stage of a snowball Earth, or in the late sage, depending on the greenhouse gas concentrations and orbital configurations; the coastal regions may be ice-free even if entire continents are covered by ice sheets like the Dry Valleys of the present-day Antarctica, where ice flow is restricted by nearby topography and by katabatic winds."

In a water belt Earth, which is warmer than snowball Earth, the tropical continents should be more easily exposed.

For the snowball Earth, a large portion of the exposed land surfaces remains exposed to the air after integration of at least 600 years. The land surface is considered exposed if the yearly mean snow thickness is more than 5 cm (2 inches), which should be thin enough so as not to cover the ground from seasonal surface temperature variations.

"At other locations, however, the snow depth may oscillate markedly during the first few hundred years of simulation but equilibrates to small values. This again indicates the importance of continuing the model runs for a sufficiently long duration."

"Our results show that a large amplitude of seasonal cycle is fully possible at equatorial latitudes in a snowball Earth, even if Earth had a normal obliquity. Therefore, the existence of equatorial sand wedges poses no danger to the snowball Earth scenario."

The lower paleo latitudes of sand wedges, the less likely that Marinoan glaciation was a water belt Earth. "Therefore, further examination of the paleolatitudes of the reported Marinoan frost-shattered carbonates or sand wedges is warranted."

In the equatorial regions on Earth today, the seasonal cycle of the monthly mean surface air temperature is <10°C. However, deep (>1 m) sand wedges were found near the paleoequator in the Marinoan glaciogenic deposits at ~635 million years ago, indicating a large seasonal cycle (probably >30°C). Through numerical simulations, we show that the equatorial seasonal cycle could reach >30°C at various continental locations if the oceans are completely frozen over, as would have been the case for a snowball Earth, or could reach ~20°C if the oceans are not completely frozen over, as would have been the case for a waterbelt Earth. These values are obtained at the maximum eccentricity of the Earth orbit, i.e., 0.0679, and will be approximately 10°C smaller if the present-day eccentricity is used. For these seasonal cycles, theoretical calculations show that the deep sand wedges form readily in a snowball Earth while hardly form in a waterbelt Earth.