The New Zealand army has been deployed to drought-stricken Northland to assist in relief efforts amid worsening drought conditions. Authorities described the situation as the worst drought on record.

The National Institute of Water and Atmospheric Research (NIWA) said the severe drought is widespread across Northland, Auckland, and Waikato regions of the North Island, with medium-level droughts in the southern parts as well.

North Shore marked its second-lowest rainfall total since 1966 with just 5 mm (0.19 inches) falling over the first month of the year.

The towns of Kaikohe and Kaitaia are the worst-affected, with severe water restrictions in force throughout February– water is strictly for cooking and drinking only, or 40-second showers.

"We're running out of water," said the Far North council, adding that the goal is to promptly lessen water usage across the district by 25 percent.

There has been no major rainfall since November 2019, and areas of the North Island are facing its longest dry spell for seven years. According to weather forecasters, the drought conditions will continue as no significant rainfall is expected through the end of March. 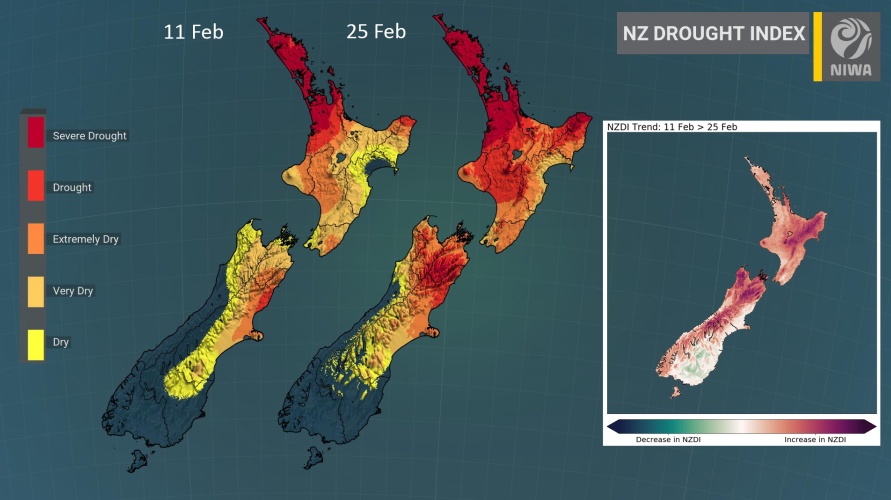 "This is as probably as serious as it gets; this is the worst drought we've had on record," Kaitaia mayor John Carter said.

Soldiers from the NZ army has been deployed in the region and will be based in Kaitaia for two weeks. Furthermore, three medium-heavy army vehicles carrying huge loads of water were sent to Northland to help refill storage tanks in affected towns.

"It’s getting close to running out in 10 days or so if we keep taking at the rate we are, we could run out of water in the streams, which is significant," said Carter.

Aside from burdening local communities, the drought has created difficult conditions for animals both in farms and the wild. Some animals were seen with unusual and unnatural coping behaviors, including the nocturnal Kiwi which was spotted cooling off and drinking water in daylight.

The government has provided two million dollars to Northland for relief assistance. However, they also admitted that the financial assistance is essentially a "short-term remedy."

From a torrent to a trickle: comparing the flow at Hunua Falls, Auckland, from July 2017 to present  pic.twitter.com/kfmL0EJEwg

21 locations had a record or near record dry summer

What will you remember? pic.twitter.com/89h5l1Y4e8