Authorities on January 23, 2020, confirmed five more fatalities from storm Gloria, bringing the death toll to nine. The fierce storm— which lashed parts of Spain beginning Sunday, January 19– has generated the biggest wave ever recorded in the Mediterranean at 8.44 m (27.7 feet). In addition, storm surge produced by Gloria has ravaged the Ebro delta up to 3 km (1.8 miles) inland, resulting in severe damage to rice paddies and ecosystem.

On Wednesday, January 22, the body of a missing man was retrieved in an inundated area near the town of Callosa, southeastern Spain, according to the local Valencia regional government.

A woman also died in an apartment that partially collapsed in Alcoy town. Furthermore, a farmer was found dead in a plastic greenhouse battered by a hailstorm in the southeastern town of Nijar, local media reported. Another person was found dead due to hypothermia.

The fatalities add to the five recorded between Sunday and Tuesday. Search operations are underway for the other four missing.

As of Thursday, authorities estimate the storm has produced waves over 13 m (42.6 feet).

Storm Gloria has already broken several significant wave height records according to the network of deep-sea buoys, according to surfing news site SurferToday. The historical maximum or highest data measured in the western Mediterranean has been claimed by an ocean buoy near Valencia. 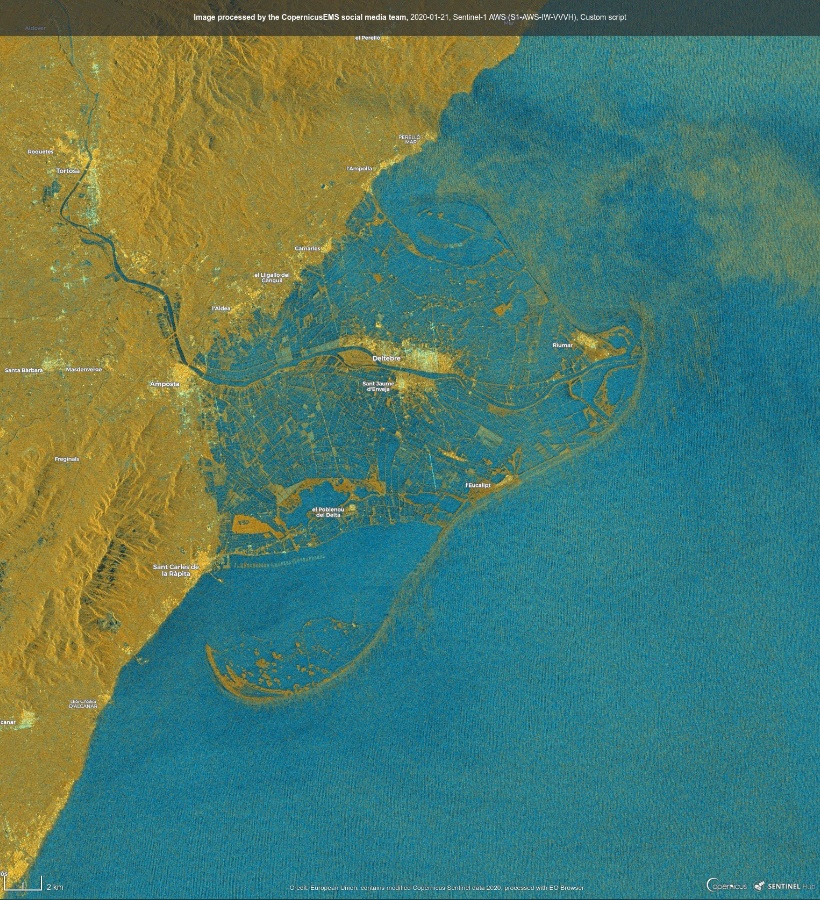 Storm Gloria has caused a storm surge that has ravaged the Ebro delta up to 3 km (1.8 miles) inland, resulting in severe damage to the rice paddies and to the ecosystem. Image credit: Copernicus EMS / Sentinel 1. Acquired: January 22, 2020

The Balearic Islands and eastern regions including Catalonia and Valencia have been among the worst affected areas as the storm enters its fifth day on January 23, moving north into France.

Storm 'Gloria' left a bit of a disaster behind #PortDePollença pic.twitter.com/o5SOg5fbmQ

Gloria's effects have also been noticeably felt inside the ports, Surfer Today reports in their awesome data-oriented article:

"In the Port of Valencia, the tide gauge reached a significant wave height of 2.11 meters (6.9 feet) and a maximum wave height of 3.28 meters (10.76 feet). This is also the maximum record ever recorded by this station since the installation of the sea level sensor in 2006… The Dragonera buoy, in the Balearic Islands, also recorded a historical maximum since it was put into operation in 2006. On January 20, at 3 am (local time), the buoy registered 7.97 meters (26.14 feet) of significant wave height, beating its previous record of 6.33 meters (20.76 feet) obtained in January 2017. This buoy provides maximum wave height data in real-time and delivered a new record of 14.2 meters high in the same period."