A huge and powerful extra-tropical cyclone – named Brendan – hit parts of the UK and Ireland on Monday, January 13, 2020, leading to school closures and power outages to more than 100 000 homes and businesses.  Met Eireann has issued an orange warning for entire Ireland. Yellow weather warnings for high winds were issued for much of the UK.

Brendan underwent rapid intensification (bomb cyclone) before it made landfall on Monday morning with wind gusts of almost 100 km/h (62 mph) over northeast counties and over 140 km/h (87 mph) off the coast of West Cork.

Strong winds have brought down trees and blown debris on to roads, creating difficult driving conditions. Three trampolines were blown on to roadways– two on the M7 near the University of Limerick and near Oola in Co Tipperary, and the third one near Junction 9 on the M9.

According to the Electricity Supply Board (ESB), crews have restored power to more than 100 000 customers.

"High winds during daylight hours have hampered restoration efforts and have also caused further losses in supply. We expect the majority of those without power at the moment to have supply restored tonight, though some families will be without power overnight. High winds expected in the west and northwest this evening, so further cuts are possible," ESB stated.

Furthermore, ESB explained that the damages were mainly due to knocked down trees on overhead lines. ESB has also urged the public to avoid fallen trees, wires, or damaged electricity networks as they may be dangerous. 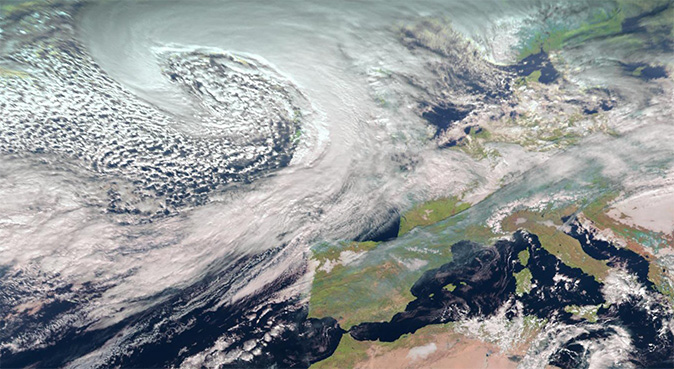 One resident in the area also said that drivers struggled to drive through waters as wave after wave kept crashing over the wall. "Absolutely horrendous conditions on the Belfast Road in Carrickfergus. Police have now closed the road as the sea wall collapses," local Kevin Scott said.

Several footages of the storm were also shared on social media, showing severe weather at Sailcoats in Scotland, and many parts of Ireland including Cork, Kerry, and Donegal.

Ferry operator Caledonian Macbrayne has canceled sea travel, including services to and from Barra, Coll, Harris, Islay, Tiree, and North and South Uist.

#StormBrendan has eased but is still sitting just to the north of the UK.

Another low pressure is now heading across England and Wales, this will bring strong winds today.

Disruption is possible and weather warnings remain in force.

In addition, Scottish airlines Loganair offered passengers booked on several flights on Monday to change any date in the following week for free.

Irish Ferries has also canceled four ferries between Pembroke and Rosslare, saying most sailings on Tuesday are either in doubt or canceled as well.

Shannon in western Ireland was the worst-affected airport. Several Aer Lingus flights to and from Birmingham, Edinburgh, and Heathrow have been postponed. All schools have been closed in the Western Isles of Scotland as a precaution.

Met Office warned that although Storm Brendan has now eased, it is "still sitting just to the north of the UK." Nicola Maxey of Met Office added that "in the wake of Storm Brendan, we have another low-pressure system arriving from the South West."

As of Monday night, eight flood warnings and 79 alerts issued by the Environment Agency remained in effect.