Tropical moisture and cold Canadian air are combining in the Southwestern states to produce areas of, locally, heavy rain and widespread heavy mountain snowfall. Flash flooding will be possible in, typically, dry washes of Arizona. This system will move into the Central U.S. on Friday, November 22 and could produce heavy rain and flash flooding in the Mid-South.

A deep upper-level low over the Great Basin is forecast to move eastward to the Western Ohio Valley by Saturday evening, November 23, 2019, according to the National Weather Service (NWS). The system will produce rain and higher-elevation snow over portions of the Great Basin, Central and Southern Rockies, and the Southwest regions.

There will be snow in parts of the Desert Southwest, Great Basin, Southern, and Central Rockies. Light snow and freezing rain are likely for parts of mid-Ohio Valleys. Rain is also expected over areas of the Lower Mississippi, Ohio, and Tennessee Valleys.

Showers and thunderstorms will develop over portions of Southern Plains and Lower Mississippi Valley. 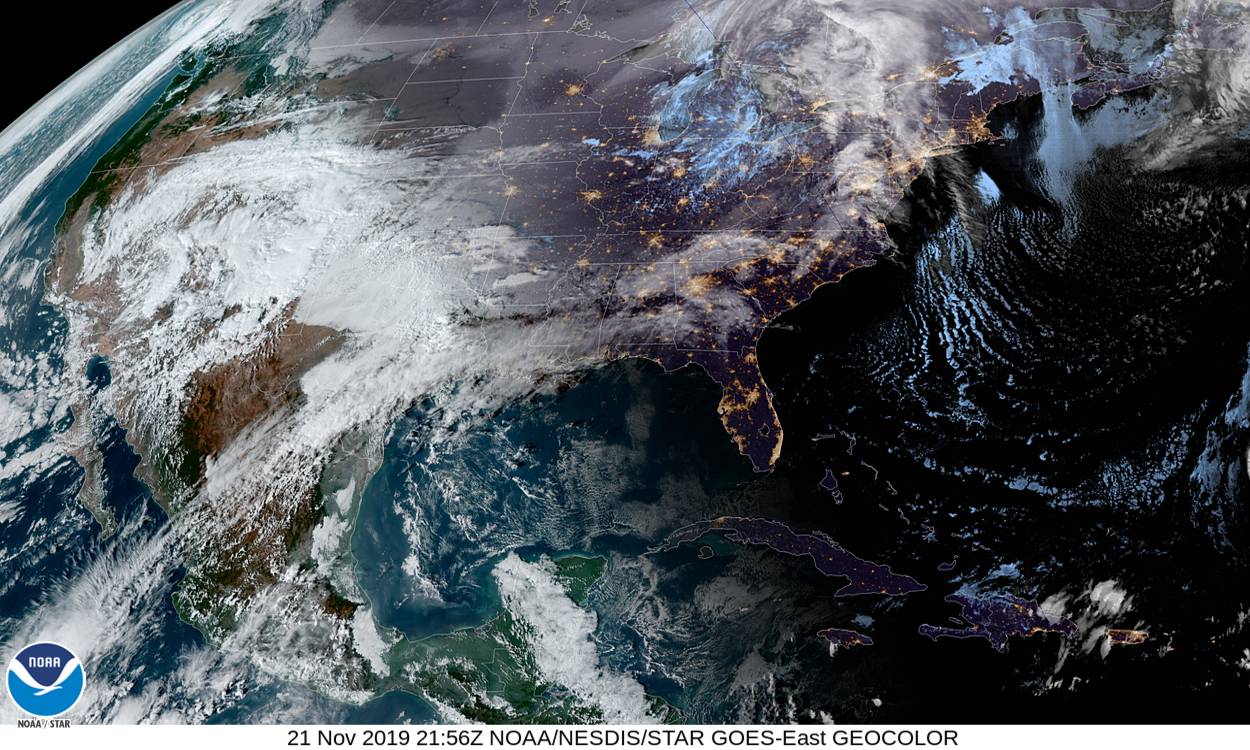 "Rain will develop along the associated front overnight Thursday over parts of the Lower/Middle Mississippi Valley and parts of the Tennessee Valley that will expand into parts of the Ohio Valley on Friday into Friday evening," NWS said.

On Friday, November 22, rains will develop over parts of the  Central Appalachians or Mid-Atlantic, ending by the evening.

Furthermore, another round of rain will head to the Mid-Atlantic/Central Appalachians into the Southeast on Saturday evening, November 23, into overnight.

Light snow is predicted over parts of the Northern Ohio Valley Saturday afternoon into the evening. There will be chances of freezing rain over the mid-Mississippi Valley on Friday evening, November 22, into the following day.

A front over the Great Lakes extending southwestward to the Southern Plains will head eastward off the Northeast or Mid-Atlantic Coast by Friday evening.

The storm will bring rain and snow over portions of the Upper Great Lakes, ending by Friday afternoon.

Rain is expected to move into parts of New England on Friday, with rain becoming snow over the Lower Great Lakes on Friday afternoon. The snow will move into New England by Friday evening, ending overnight.

Elsewhere on November 22, onshore flow off the Pacific will begin the late afternoon.

By Saturday morning November 23, light rain will develop over parts of the Olympic Peninsula into parts of the Northern Cascades into the evening.

#GOESEast is watching a #storm system that hit the #Southwest yesterday as it moves northeastward across the #Plains and #Midwest today, bringing heavy #rain from #Texas to the western #GreatLakes and #snow over the Upper Midwest. More imagery: https://t.co/9Dbt100Tu4 pic.twitter.com/cV4z0hka2E

Traveling next week? Potential weather hazards leading up to #Thanksgiving include:

Rounds of rain and snow across the Rockies and Western U.S.

Possible Pre-Thanksgiving storm from the Midwest to the Northeast. pic.twitter.com/lHqcDViDEg