A shallow, warm-core cyclone or medicane informally named Trudy, also Detlef and Bernardo, formed in the western Mediterranean on November 11, 2019, and made landfall in Algeria on the same day.

The storm made landfall with maximum sustained winds of 110 km/h (70 mph) and minimum pressure of 992 hPa close to Beni Belaid, Algeria on November 11.

Here are some of the best images of #MedicaneTrudy around peak yesterday. #medicane #weather #hurricane pic.twitter.com/c9wx9I9K9m

Trudy/Detlef/Bernardo's circulation has been destroyed by mountains in #Algeria, causing its dissipation. Its remnants are going to be absorbed by a second developing cyclone, #CycloneVictoria (named by Greece). pic.twitter.com/dbqz22p9sT 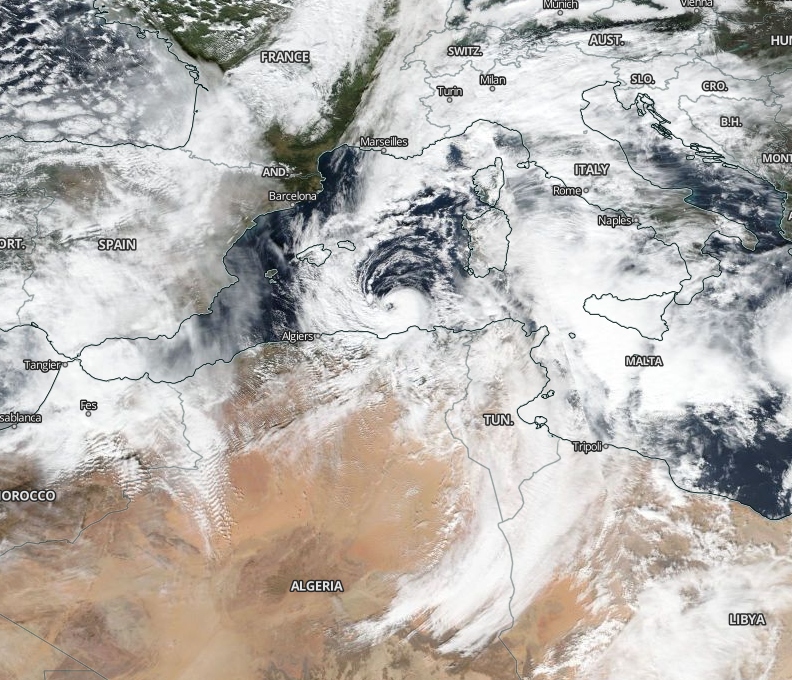 The cyclone was a part of the large cyclonic system under a big, deep upper cold-core over the Mediterranean.

Satellite imagery showed a rapidly developing structure with an intense convective band wrapping around an eye. The convective band was wrapping in the core tightly, with highly defined upper-level outflow on the southeast quadrant of the system.

The system is also responsible for widespread convective storm clusters over south Italy, Malta, and Ionian sea, as well as the cold front moving east-northeast in the afternoon and evening.