Medicane "Gloria" — known as Apollo in Italy — has re-strengthened and is forecast to come close to Sicily, Italy and stall some distance off the coast, then accelerate to landfall in eastern Libya. The storm is expected to bring heavy rain, strong winds, and waves over 4.5 m (15 feet) to Sicily and Malta through Friday, October 29, 2021.

The Italian Department for Civil Protection placed eastern Sicily under a new amber alert for Thursday and the highest-level red lert for Friday in anticipation of the storm’s arrival, after almost a week of extreme weather in the area.1

Gloria is already responsible for at least 3 deaths in Catania after it brought an entire year's worth of rain in just 48 hours, causing massive flash flooding.2

The system will come quite close to the coastline of Sicily, although its strongest winds likely won't impact the island, according to the Mediterranean Cyclone Center forecast issued 18:00 UTC on October 28.3

Then, Gloria is expected to stall near the coastline of Sicily for about a day, bringing with it the potential for dangerous weather.

After some time stalling, the cyclone will accelerate towards Libya, finally coming ashore around the Benghazi area late Sunday, October 31.

The storm isn't expected to strengthen much further beyond 80 mph (50 mph), and is expected to weaken as it approaches Libya, likely peaking during its phase of stalling near Sicily. 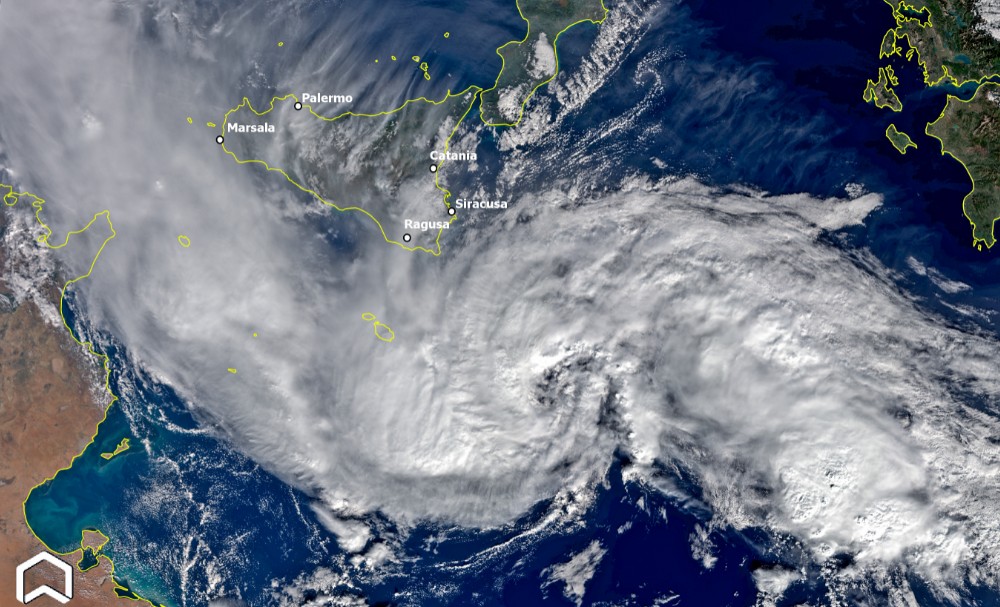 Gloria's appearance is somewhat reminiscent of Ianos/Cassilda late on September 16/early on September 17, 2020, the center added.

The cyclone's center is surrounded by convection on three quadrants, with the SE quadrant being relatively weak and open. The LLCC itself is exposed by a lack of convection, and an eye-like feature is present.

The system appears stationary right now, based on a lack of meaningful motion on satellite imagery.

Gloria is expected to level off in intensity for a short time as it approaches Sicily and Malta.

Interests in Sicily, Malta, and Libya should be prepared for periods of high wind and heavy rain over the forecast period, MCC said.

2 Massive floods hit Catania after entire year's worth of rain in just 2 days, Italy – The Watchers