A new study concludes that the season in which earthquake happens can affect the impact of ground failure and potential destruction.

The paper, published in Seismological Research Letters journal, said the 1887 Magnitude 7.3 Verny earthquake and the nearby 1911 Magnitude 7.8 Kemin earthquake likely produced the same shaking. However, the Kemin quake caused significantly more ground failure possibly due to a shallow frozen ground layer that was occurring during the winter season.

The frozen layer may have inhibited the drainage of pore-pressure excess through the surface during the earthquake, causing liquefaction at depth. As a result, the frozen layer extending about one meter below the surface "was a sealant layer that was not allowing the pore pressure to diffuse," explained Stefano Parolai from the Istituto Nazionale di Oceanografia e di Geofisica Sperimentale in Italy, also one of the study authors.

The findings suggested seismologists should consolidate potential seasonal differences in soil characteristics "as they are making probabilistic liquefaction or ground failure assessments," co-author Denis Sandron explained, from the Istituto Nazionale.

The effect of frozen ground on ground deformation is already calculated for some types of infrastructure like oil pipelines in Alaska. However, Parolai said the Kazakhstan study shows the significance of considering these effects in urban areas, particularly when it can become a seasonal effect.

The 1887 earthquake in Verny, the former name of Almaty, ravaged almost all of the town's buildings and killed 300 people.

The Kemin earthquake, which occurred about 40 km (25 miles) from Verny, caused an unexpected amount of widespread ground failure and devastation, as well as 390 fatalities. 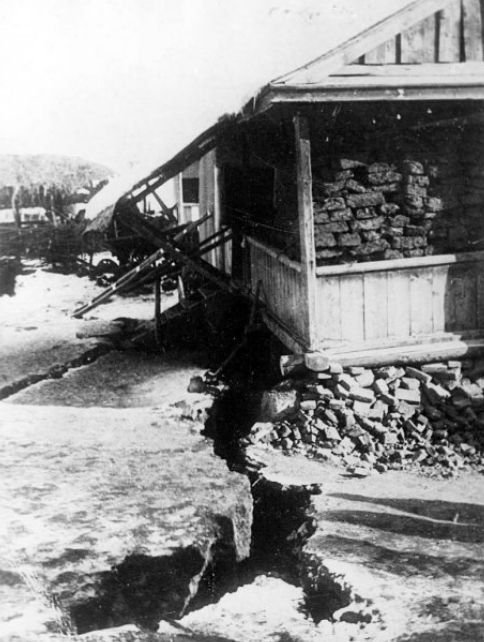 The team reviewed historical records of the two earthquakes as part of a larger project that is examining site effects and seismic risk in central Asia– this is led by the GFZ German Research Center for Geosciences.

The two quakes in Almaty, including the secondary effects like landslides, "were very well documented by expeditions of the Mining Department of Russia and the Russian Mining Society at the time," said Parolai.

The differences in ground failure were perplexing, according to the researchers. The fact that the two quakes had occurred at different times of year urged Sandron and his colleagues to consider whether frozen ground might have been a factor in ground failure, as previous researchers had noted for the Magnitude 9.2 Great Alaska earthquake in 1964.

To delve further into this idea, the research team made computer simulations of the quakes using different models of the soil profile that would affect the velocity of seismic waves passing through them, along with temperature data to identify whether it would be possible to have a frozen layer of ground at shallow depth during January.

Co-author Rami Alshembari of the University of Exeter in the United Kingdom said one of the factors was finding a way to include appropriate strong motion data recordings in the simulations, since "of course there were no digital recordings of these two earthquakes. We had to choose the most reasonable and robust studies for [the] input of strong motion."

Researchers concluded that models that included a frozen layer 1 m (3 feet) deep as a seal against pore pressure draining were the best fit for the ground failure seen in the Kemin earthquake.

Although the authors suspected that a frozen layer could be the culprit, they said they were astounded by the strength of the effect.

"Even in materials where we would not expect this effect, due to local conditions and temperatures, it could happen. Without this good documentation, probably we would not have noticed this effect," Parolai said.

"This is telling us that good data taken in the past can be very precious in 100 years."

During the past 150 yr, the city of Almaty (formerly Verny) in Kazakhstan has suffered significant damage due to several large earthquakes. The 9 June 1887 Mw 7.3 Verny earthquake occurred at a time when the city mainly consisted of adobe buildings with a population of 30,000, with it being nearly totally destroyed with 300 deaths. The 3 January 1911 Mw 7.8 Kemin earthquake caused 390 deaths, with 44 in Verny itself. Remarkably, this earthquake, which occurred around 40 km from Verny, caused significant soil deformation and ground failure in the city. A crucial step toward preparing for future events, mitigating against earthquake risk, and defining optimal engineering designs, involves undertaking site response studies. With regard to this, we investigate the possibility that the extreme ground failure observed after the 1911 Kemin earthquake could have been enhanced by the presence of a shallow frozen ground layer that may have inhibited the drainage of pore pressure excess through the surface, therefore inducing liquefaction at depth. We make use of information collected regarding the soil conditions around the city at the time of the earthquakes, the results from seismic noise analysis, borehole data, and surface temperature data. From these datasets, we estimated the necessary parameters for evaluating the dynamic properties of the soil in this area. We successively characterize the corresponding sediment layers at the sites of the observed liquefaction. Although the estimated soil parameters are not optimally constrained, the dynamic analysis, carried out using selected strong‐motion recordings that are expected to be compatible with the two considered events, indicated that the extensive ground failure that occurred during the Kemin event could be due to the presence of a superficial frozen soil layer. Our results indicate that for this region, possible seasonal effects should, therefore, be considered when undertaking site effect studies.