A short explosive eruption took place at Sheveluch volcano, Kamchatka, Russia at 01:30 UTC on October 6, 2019. The Aviation Color Code was briefly raised from Orange to Red.

Eruptions such as this are nothing special for Sheveluch. Most of the volcanic ash plume was obscured by the meteorological cloud. Luckily, the one just a few days ago (image below) wasn't. 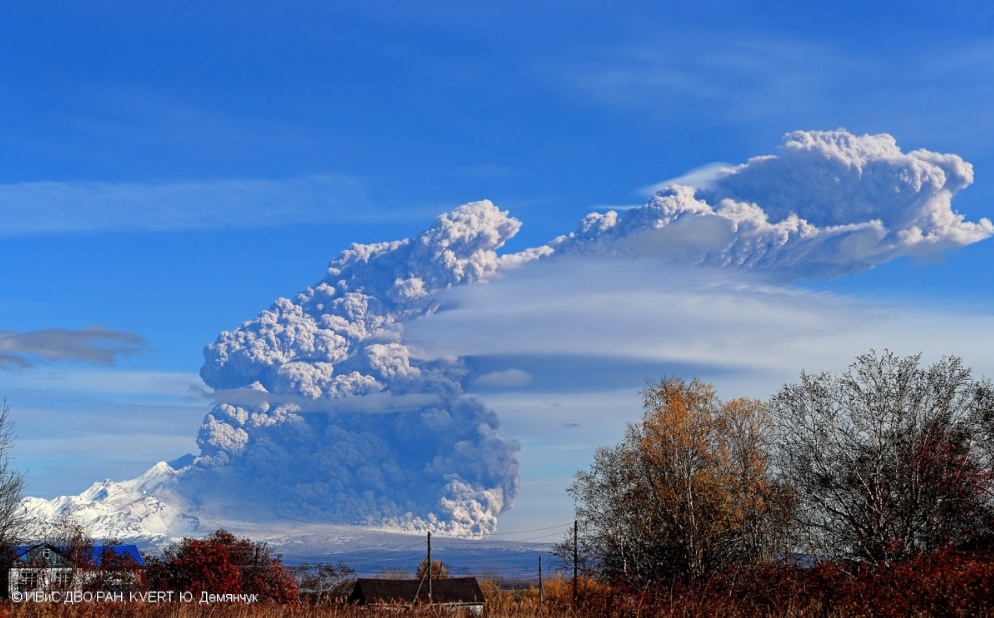 The last notable eruption at Sheveluch took place at 23:40 UTC on October 1, 2019. The explosion produced ash plume that reached an altitude of 10 km (34 000 feet) above sea level and a pyroclastic flow that spread to the west from the active dome.

The high, isolated massif of Sheveluch volcano (also spelled Shiveluch) rises above the lowlands NNE of the Kliuchevskaya volcano group. The 1 300 km3 (311.9 mi3) volcano is one of Kamchatka's largest and most active volcanic structures. The summit of roughly 65 000-year-old Stary Shiveluch is truncated by a broad 9-km-wide (5.6 miles) late-Pleistocene caldera breached to the south. Many lava domes dot its outer flanks.

The Molodoy Shiveluch lava-dome complex was constructed during the Holocene within the large horseshoe-shaped caldera; Holocene lava dome extrusion also took place on the flanks of Stary Shiveluch. At least 60 large eruptions have occurred during the Holocene, making it the most vigorous andesitic volcano of the Kuril-Kamchatka arc. Widespread tephra layers from these eruptions have provided valuable time markers for dating volcanic events in Kamchatka. Frequent collapses of dome complexes, most recently in 1964, have produced debris avalanches whose deposits cover much of the floor of the breached caldera. (GVP)