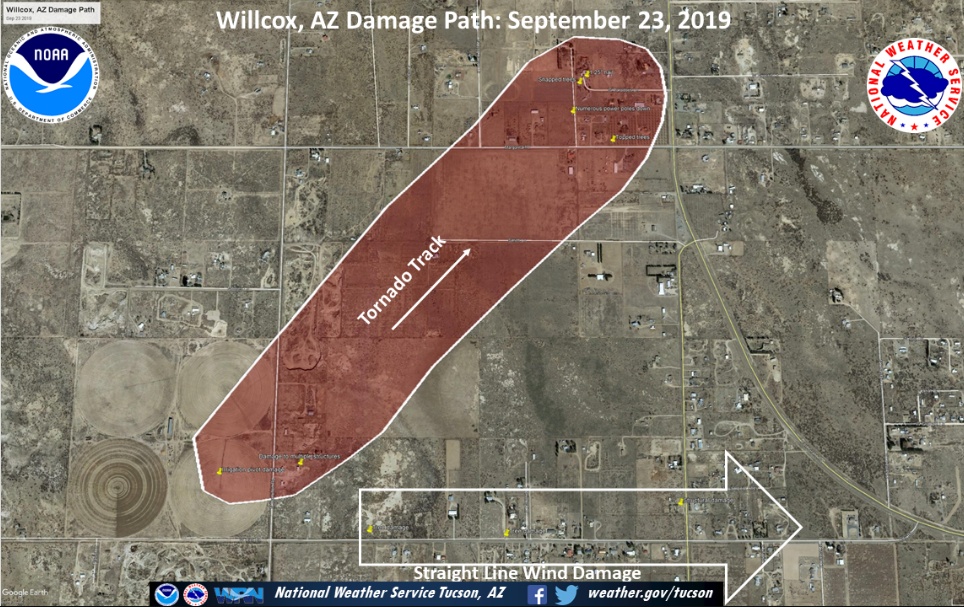 According to Ken Drozd with National Weather Service (NWS) in Tucson, Arizona receives an average of four tornadoes per year and typically these are dust devils that have been sucked into a thunderstorm which also do not leave much destruction.

The tornado approached the Cave Creek and New River areas near Phoenix on the afternoon of September 23. According to the NWS, they issued a tornado warning for the first time in five years.

"Now, in this case, we had a descending tornado that you would more typically see in the central Plains," Drozd added.

A weak tornado touched down in Arizona on Monday as major storms moved through the Phoenix area. On average, the state sees about 4 to 5 twisters per year. https://t.co/rJetg5ngDU pic.twitter.com/b314AQCULd

Over 1 800 customers lost electricity, while one resident reported that around 40 trees were uprooted in his area.

The remnants of Lorena not only produced tornadoes but also floods and strong winds. On the same day, a school bus with 120 children onboard was trapped in floods in the Phoenix area.

#Breaking SFMD crews have just rescued a mother and her small child from a flooded wash in the area of McKellips & Main Dr. This is the fifth water rescue call this morning in Apache Junction. pic.twitter.com/nvgPICnK1D

According to Battalion Chief Kevin Spirlong of the Surprise, Arizona Fire Department, all children have been rescued safely. Following this, schools in Apache Junction were suspended early at 11:45 LT.

Emergency personnel reportedly conducted at least five water rescues in Apache Junction, which is about 58 km (36 miles) east of Phoenix.

"Moisture from the remnants of former eastern Pacific Hurricane Lorena has pushed into southern Arizona where it's interacting with a strong jet stream disturbance," Weather.com Meteorologist Chris Dolce stated.

Wow. This is a look at flooding in Apache Junction. @abc15 pic.twitter.com/Y3lVYDgqcl

"That setup is triggering the development of numerous showers and thunderstorms in southern and central Arizona, which could cause more flash flooding through early Tuesday. Severe thunderstorms with damaging winds and large hail are also a potential threat."

Storms are expected to continue through Thursday, September 26.

Pressure from flood waters brought down this brick wall behind a home at Golden Days Mobile Home Park after heavy rains in Apache Junction. @abc15 pic.twitter.com/quLAYG8mHC

WHOA! Check out that shelf.

This was the scene from #Arizona on Monday. Parts of #Phoenix saw flooding and even a #tornado! pic.twitter.com/cTt5eXKNya