Tropical Storm "Barry" formed at 15:00 UTC on July 11, 2019, in the Gulf of Mexico, as the second named storm of the 2019 Atlantic hurricane season. Barry is expected to reach hurricane status on Friday, July 12 and be near the central or southeastern coast of Louisiana on Friday night (CDT) or Saturday, July 13. The slow movement of this system will result in a long duration heavy rainfall threat along the central Gulf Coast and inland through the lower Mississippi Valley through the weekend and potentially into early next week.

Barry is expected to bring storm surge, rainfall, and wind hazards to the central Gulf Coast during the next several days.

There is a danger of life-threatening storm surge inundation along the coast of southern and southeastern Louisiana where a Storm Surge Warning has been issued. The highest storm surge inundation is expected between the Mouth of the Atchafalaya River and Shell Beach. Residents in these areas should listen to any advice given by local officials.

A Tropical Storm Warning and Hurricane Watch are in effect for much of the Louisiana coast and additional watches and warnings could be required later today. Residents in these areas should ensure they have their hurricane plan in place.

The slow movement of this system will result in a long duration heavy rainfall threat along the central Gulf Coast and inland through the lower Mississippi Valley through the weekend and potentially into early next week.

Flash flooding and river flooding will become increasingly likely, some of which may be significant, especially along and east of the track of the system.

A Tropical Storm Warning is now in effect for the Louisiana coast from the Mouth of the Pearl River to Morgan City.

A Storm Surge Warning is now in effect for the Louisiana coast from the Mouth of the Atchafalaya River to Shell Beach.

A Tropical Storm Watch is now in effect for the Mississippi coast east of the Mouth of the Pearl River to the Mississippi/Alabama border…and for Lake Pontchartrain and Lake Maurepas including metropolitan New Orleans. 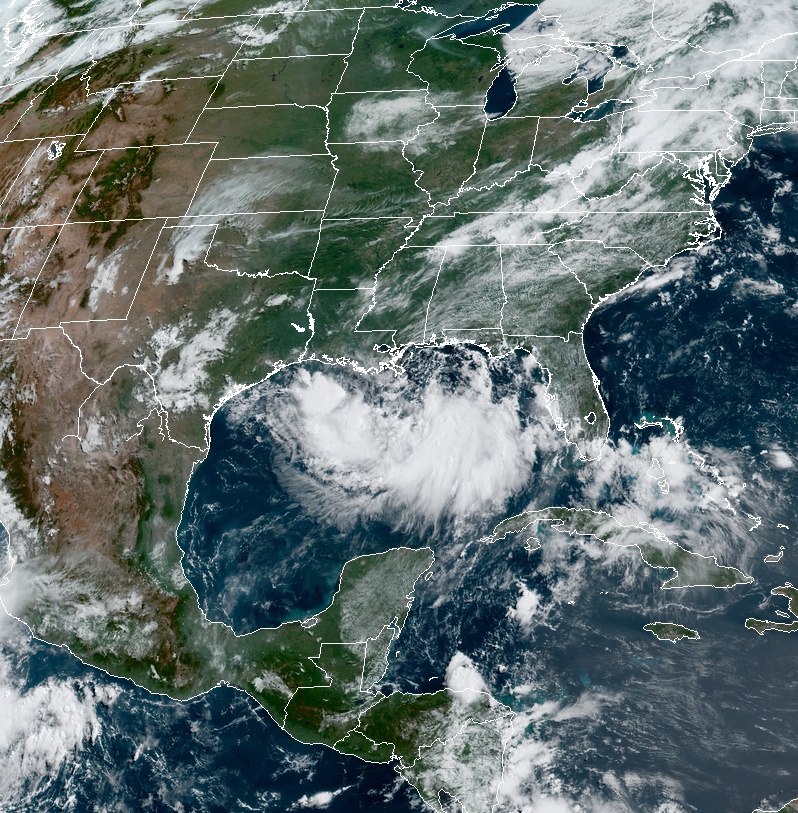 Additional strengthening is expected during the next day or two, and Barry could become a hurricane late Friday or early Saturday.

On the forecast track, the center of Barry will be near the central or southeastern coast of Louisiana Friday night or Saturday. 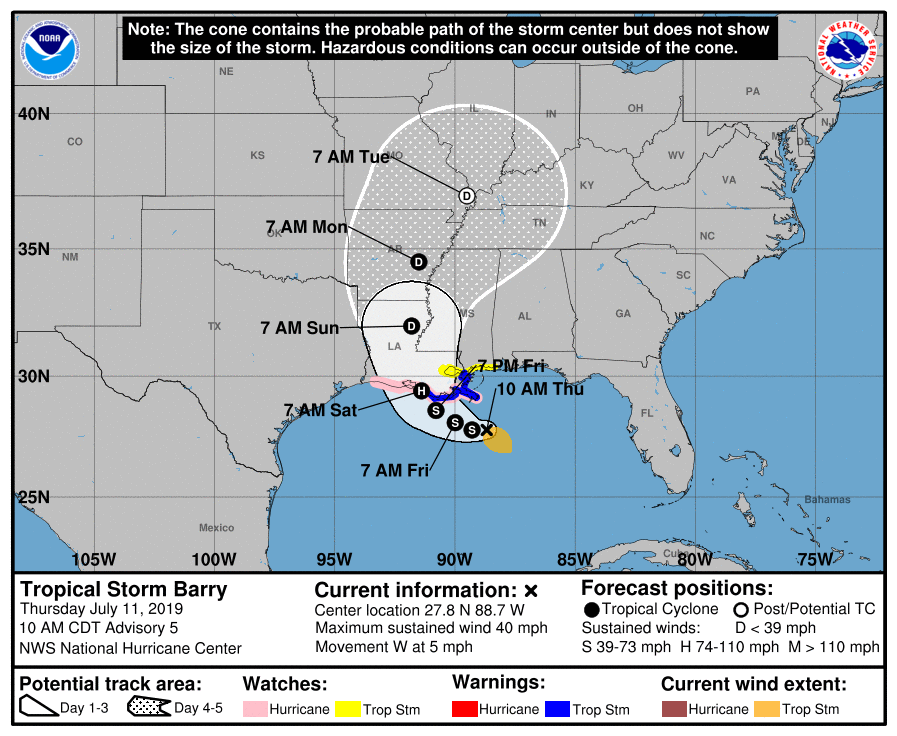 Surge-related flooding depends on the relative timing of the surge and the tidal cycle and can vary greatly over short distances. For information specific to your area, please see products issued by your local National Weather Service forecast office.

Barry is expected to produce total rain accumulations of 254 – 380 mm (10 to 15 inches) near and inland of the central Gulf Coast through early next week, with isolated maximum rainfall amounts of 508 mm (20 inches) across portions of eastern Louisiana and southern Mississippi.

A tornado or two are possible tonight and Friday across southern portions of Louisiana and Mississippi.