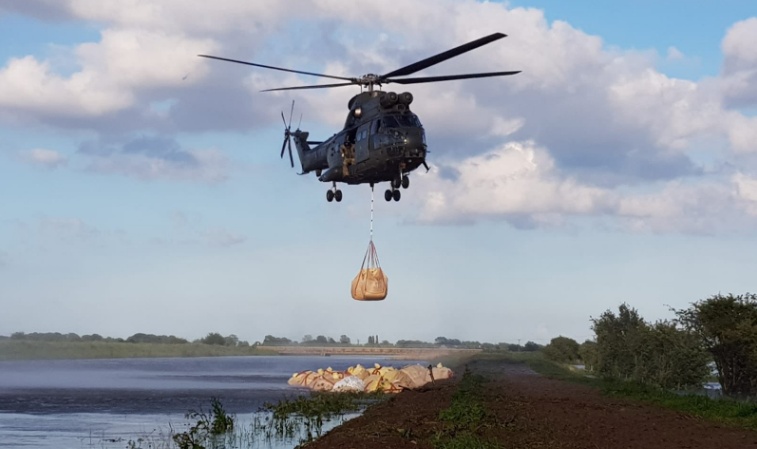 580 homes north and south of the River Steeping in the town of Wainfleet All Saints in Lincolnshire are evacuating after the river burst its bank at Thorpe St Peter. Some places across the UK recorded 1, 2 or close to 3 times their usual June rainfall in just a couple of days.

"Monday 10th and Tuesday 11th were particularly wet days, especially in the east and southeast England and northeast Wales, where some places recorded almost two months' worth of rain in one day," the UK Met Office said June 14.

While some areas in Britain have seen their full amounts of monthly rain, 'so far we don't think we're on track to beat the 2012 record as a wet June,' the UK Met Office said. June 2012 registered 150 mm (5.9 inches).

The map below shows the rainfall so far this month as a percentage of the June average. The dark blue areas are those that have already received more than twice their normal June rainfall. In contrast, Scotland has received just over half its normal June rainfall in the first half of the month so is much closer to what we might expect for this point in the month. 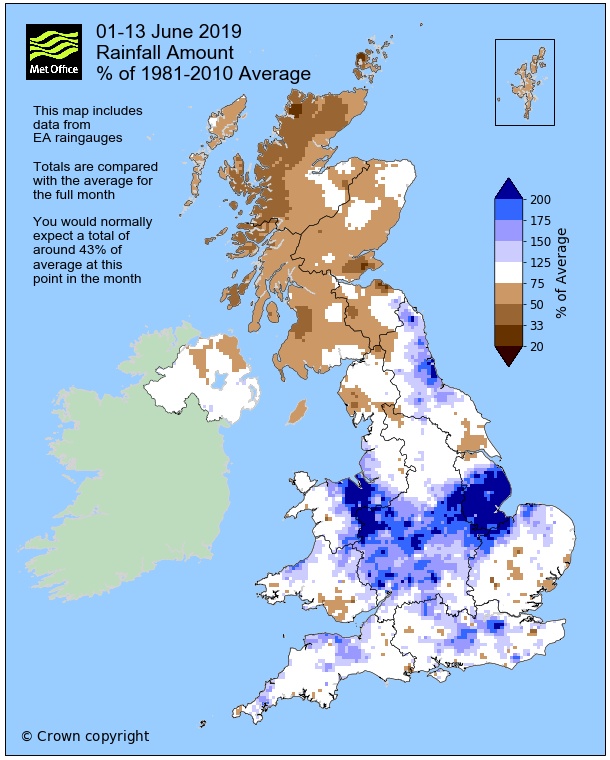 The Met Office issued a series of National Severe Weather Warnings for heavy rain and thunderstorms during this period, with amber rain warnings for London, southeast England and southeast Scotland. The Environment Agency issued numerous flood warnings and alerts, with significant flooding in Lincolnshire where over 100 properties were flooded by June 14.

On June 15, 580 homes north and south of the River Steeping in the town of Wainfleet All Saints in Lincolnshire are evacuating after the river burst its bank at Thorpe St Peter.

Royal Air Force (RAF) helicopters have been deployed to drop sand in an attempt to repair deteriorated flood defenses.

Lincolnshire flooding: 9pm last night. This is the River Steeping at Thorpe St Peter near Skegness as it breaks through one of its banks. #flooding #Lincolnshire pic.twitter.com/8XrMYrKlji

Dramatic footage shows the extent of #flooding in #Lincolnshire as authorities confirm almost 600 homes have been evacuated.

These are the latest 48 hour rainfall totals up to 9am today. Some sites in #Lincolnshire have seen the highest totals with double the average monthly rainfall for June pic.twitter.com/OVs9tZKpum

The most unsettled weather will be towards the northwest this coming week as the jet stream edges northwards. However, warmer air feeding into the south will bring the risk of thunderstorms pic.twitter.com/szVX3ge6C0