Tropical Cyclone "Kenneth" made landfall in the province of Cabo Delgado, northern Mozambique on April 25, 2019 with maximum sustained winds of 220 km/h (140 mph). This made it the equivalent of a Category 4 hurricane on the Saffir-Simpson Hurricane Wind Scale – the first such cyclone to hit the province since records began 60 years ago.

The event comes just one month after devastating Tropical Cyclone "Idai" hit the city of Beira, Mozambique. Idai left more than 1 000 people dead across the region and is considered as one of the southern hemisphere's strongest natural disasters ever.

Idai and Kenneth marked the first time in known history that the country experienced two tropical cyclone landfalls in one season. 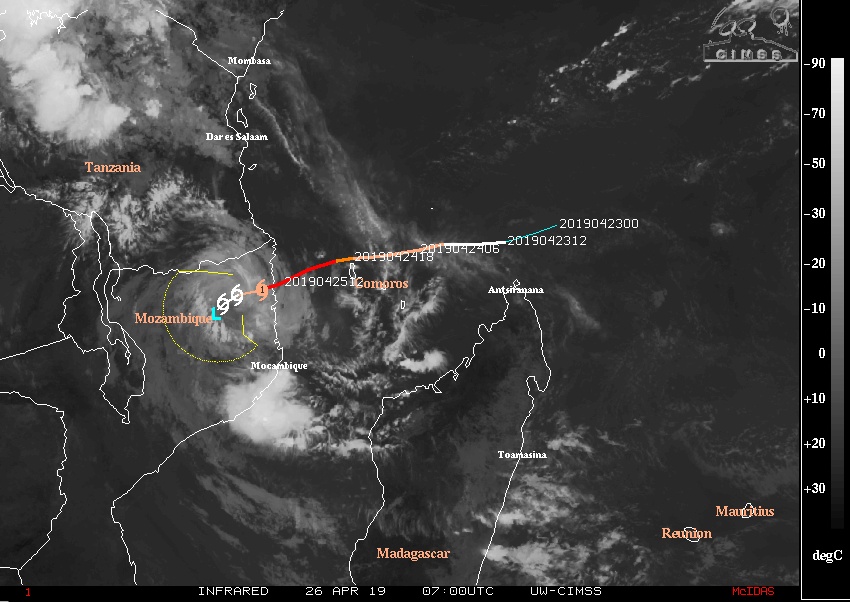 Kenneth made landfall between the districts of Macomia and Mocimboa da Praia.

Mozambique's Institute of Disaster Management (INGC) said more than 30 000 people were evacuated from areas expected to be hit by Kenneth. It said it prepared supplies ready to assist 140 000 people for 15 days.

Experts said they expect extremely heavy rain in the area, more than 500 mm (20 inches) from April 24 to 30, and more than 750 mm (30 inches) possible in some locations in Cabo Delgado. This is roughly 4 – 5 times the average monthly rainfall for the region.

As the storm comes at the end of the rainy season, river levels are already high, and several rivers are projected to increase beyond the severe alert threshold after landfall, with peak flows most likely to occur on April 29 in the region around Pemba, UN OCHA said.

More than 747 000 people are at risk of flooding and landslides. 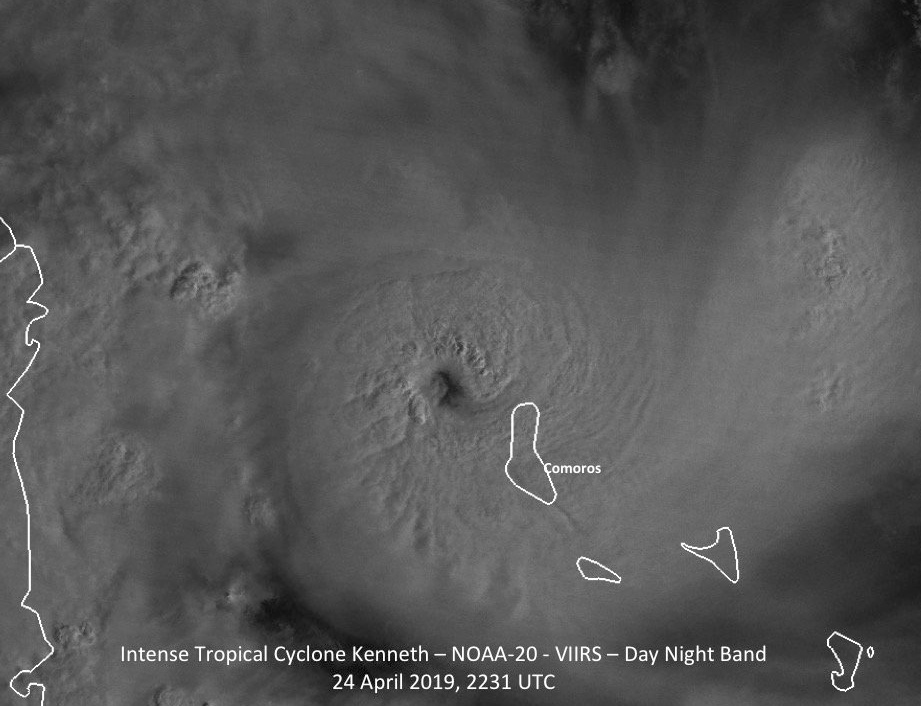 While assessments are ongoing, initial reports from Comoros indicate that several villages were flooded due to sea surges and broken dykes, and that power was cut in multiple locations. Roads have reportedly been damaged and cut off by fallen trees, while telephone poles are down in multiple locations, UN OCHA said.

Southern Tanzania and eastern Malawi are also expected to receive rains caused by the weather system. In Tanzania, an increase in cloud formation is already being witnessed, and an increase of rain is expected in Dar es Salaam, Tanga, Pemba, Lindi and Mtwara regions, the south coast of Tanzania and around Lake Victoria.

An estimated 90% of homes on the tourist island of Ibo were destroyed, officials said April 27.

At least 5 people were killed in Mozambique, bringing the death toll to 8.

Four ships sank off the coast of Palma town, but no deaths were reported, the Associated Press reported.

Kenneth ripped roofs off of homes and continues to generate heavy rainfall resulting in massive flooding as it moves across Mozambique, Lowcock said.

"The disaster comes only six weeks after Cyclone Idai devastated central Mozambique, killing more than 600 people, unleashing a cholera epidemic, wiping out crops in the country’s breadbasket, forcing a million people to rely on food assistance to survive, and causing massive destruction of homes, schools and infrastructure in one of the world’s poorest countries."

Yet again the most vulnerable and poorest are bearing the brunt of climate change, as powerful #cyclonekenneth leaves its mark on Mozambique. This has to be a wake-up call for the world. Please help @CARE to provide assistance and take action on climate change. pic.twitter.com/sq1FKSfxza