A sequence of volcanic earthquakes that began under Soufriere Guadeloupe volcano at 08:59 UTC, January 8, 2019, continues with 146 earthquakes since the beginning of the swarm, OVSG reported in its latest update issued January 9.

The events are located at a depth of 2.5 km (1.5 miles) under the summit of the volcano dome. The alert level remains at Yellow (Watch).

There is no reason to be alarmed at this time, the observatory said, adding that the probability of eruptive activity in the short term remains low.

"However, given the renewed seismic and fumarolic activity recorded since February 2018, a change of regime of the volcano has been observed such that we can not exclude an intensification of the phenomena in the future. As a result, the OVSG is in a state of heightened vigilance." 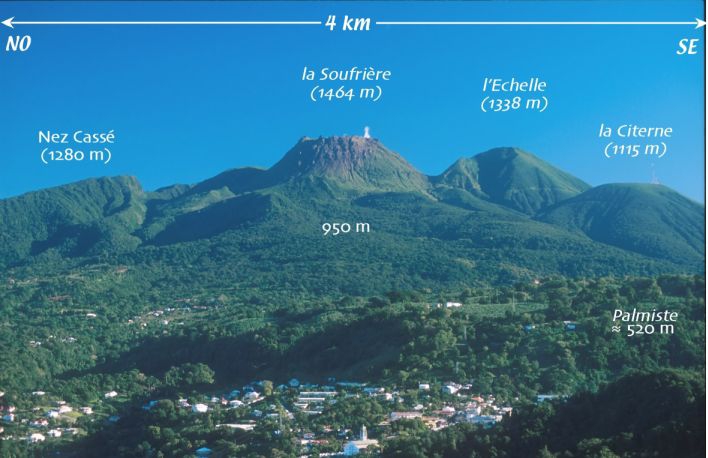 "Obviously, this type of seismicity is not a sign of a magma ascent which would be heralded by much stronger seismicity revealing fracturing of rocks, with deeper origins. In the present case, the seismicity is probably caused by hydrothermal fluid movements under the volcanic edifice, as happens, for example, under Yellowstone Park in the United States," said Claude Grandpey of Volcanoes and Glaciers.

The volcanic complex of the Grande Découverte-Soufrière consists of several volcanic buildings: Grande Découverte, Carmichael, Amic, Soufrière, Scale and Cistern. The most recent magmatic activity led to the formation of the Soufrière Dome around 485 years ago (1530 AD). The Soufriere volcano is the only active volcano in Guadeloupe (currently in a state of eruptive rest).

La Soufrière de la Guadeloupe volcano occupies the southern end of Basse-Terre, the western half of the butterfly-shaped island of Guadeloupe. Construction of the Grand Découverte volcano about 0.2 million years ago (Ma) was followed by caldera formation after a Plinian eruption about 0.1 Ma, and then by the construction of the Carmichaël volcano within the caldera.

Two episodes of edifice collapse and associated large debris avalanches formed the Carmichaël and Amic craters about 11 500 and 3 100 years ago, respectively.

The presently active La Soufrière volcano subsequently grew within the Amic crater. The summit consists of a flat-topped lava dome, and several other domes occur on the southern flanks.

Most historical eruptions have originated from NW-SE-trending fissure systems that cut across the summit and upper flanks.

A relatively minor phreatic eruption in 1976-77 caused severe economic disruption when Basse-Terre, the island's capital city, which lies immediately below the volcano, was evacuated.

This volcano is located within the Archipel de la Guadeloupe (Caribbean), a UNESCO Biosphere Reserve property.