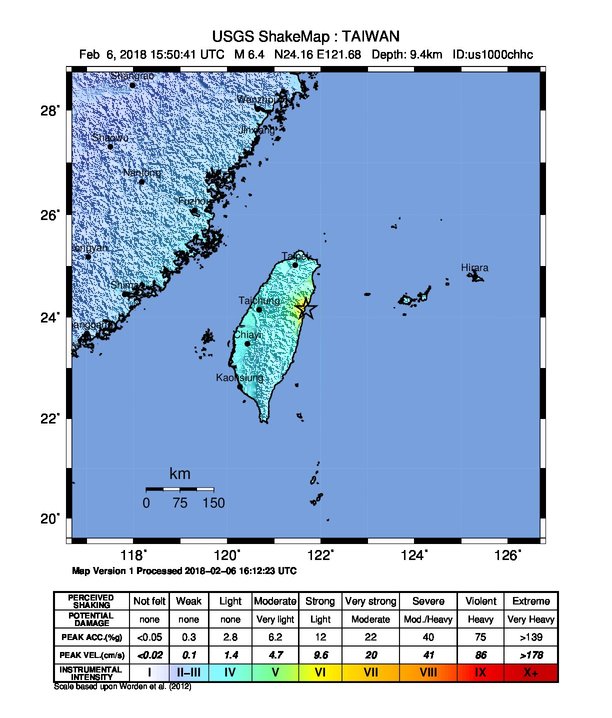 This earthquake is expected to have a medium humanitarian impact based on the magnitude and the affected population and their vulnerability.

CWB registered 4 aftershocks with magnitudes ranging from 4.1 – 5.0 over the next 36 minutes. 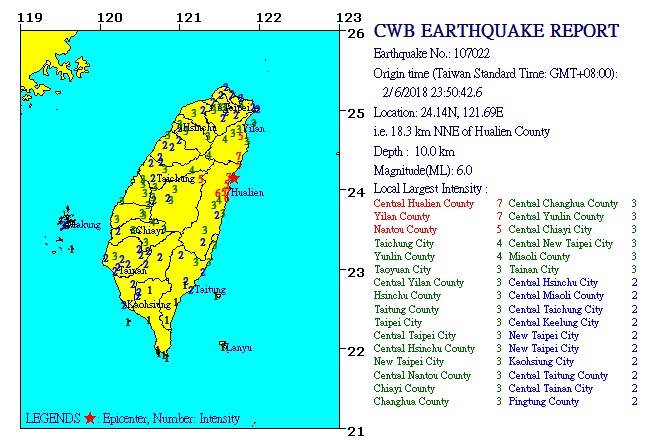 The USGS issued a green alert for shaking-related fatalities and yellow alert for economic losses. Some damage is possible and the impact should be relatively localized. Past events with this alert level have required a local or regional level response.economic losses. There is a low likelihood of casualties and damage.

Major damage reports are coming in:

A hotel in Hualien has collapsed.

At least 2 people have been killed and more than 100 injured.

Rescue efforts are in progress after many partially tilted buildings.

Numerous roads and several bridges have been damaged.

The death toll has risen to 7 and the number of injured to 254. There are at least 554 people displaced.

The death toll stands at 17. There are now 270 people injured and 800 displaced.

This was the strongest earthquake to hit the city of Hualien ever. 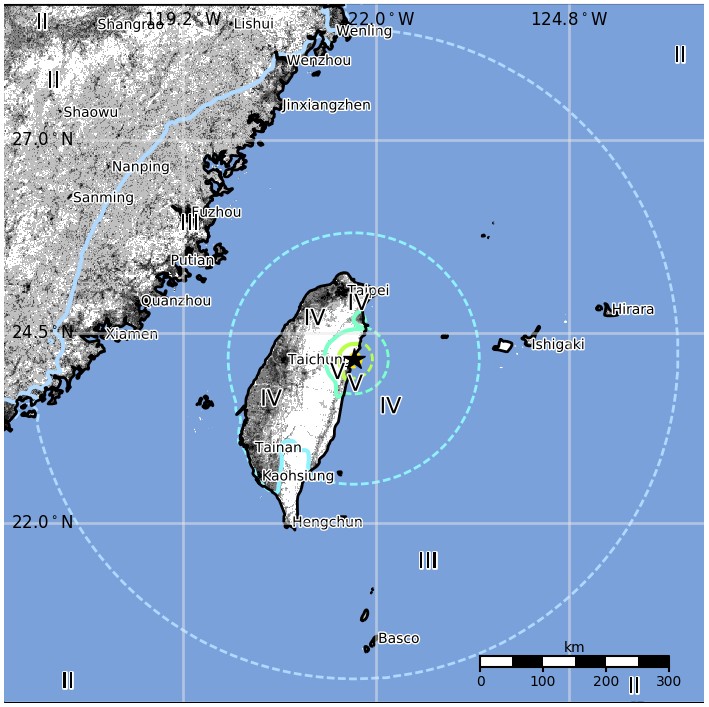 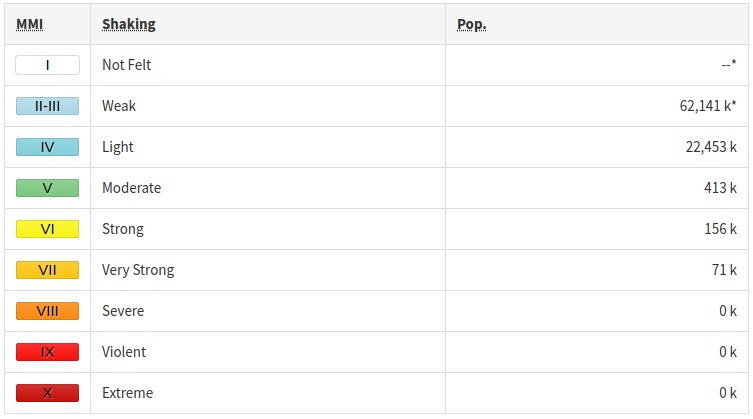 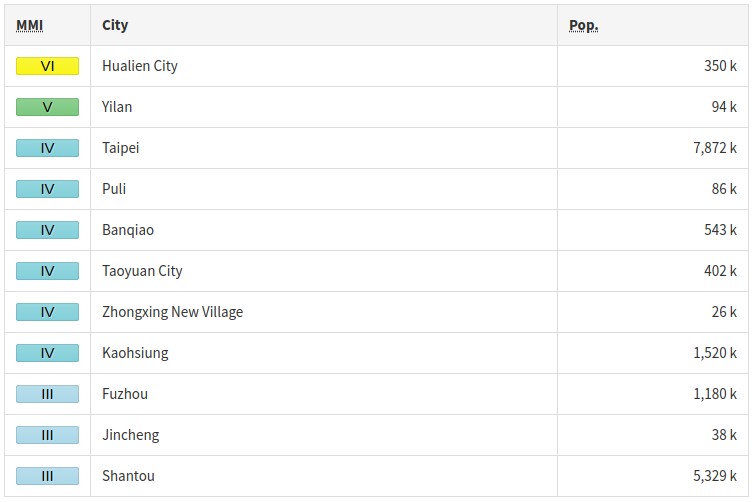 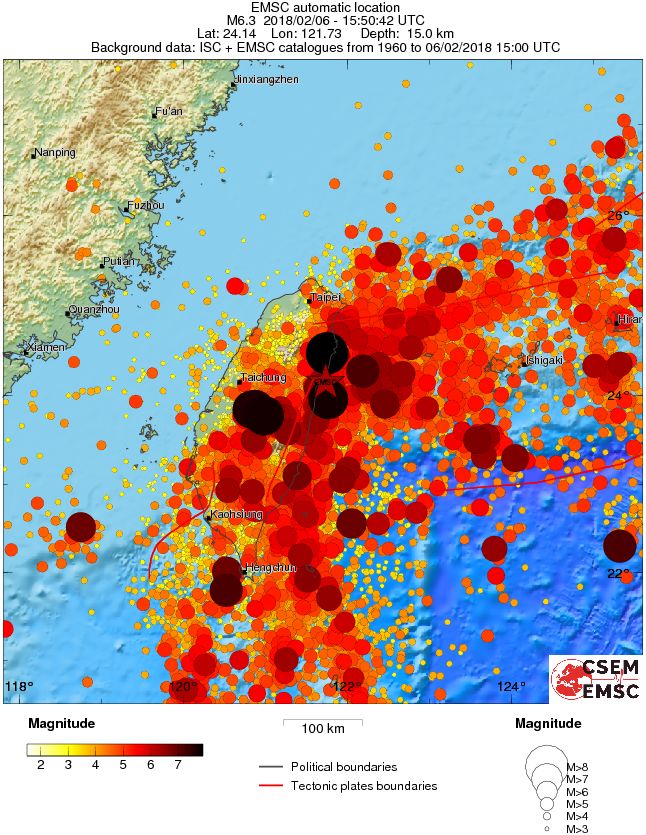 The February 6, 2018, M6.4 earthquake north-northeast of Hualien, Taiwan, occurred as the result of oblique strike-slip faulting at shallow depth, near the plate boundary between the Philippine Sea and Eurasia plates at the northeast coast of Taiwan. Preliminary focal mechanism solutions for the earthquake indicate rupture occurred on a steep fault striking either east-southeast (right-lateral), or south-southwest (left-lateral). At the location of this earthquake, the Philippine Sea plate converges with the Eurasia plate at a velocity of approximately 75 mm/yr towards the northwest. The location, depth and mechanism of the February 6, 2018. earthquake are consistent with its occurrence on, or along a fault in close proximity and relation to, the complex plate boundary in this region.

Taiwan lies in a region of complex tectonics near the intersection of three major tectonic plates – the Philippine Sea plate to the east and southeast, the Eurasia plate to the north and west, and the Sunda plate to the southwest. The location of the February 6, 2018 earthquake lies near the end of the Ryukyu subduction zone, which marks the plate boundary between the Philippine Sea and Eurasia plates in this region. The plate boundary in Taiwan itself is characterized by a zone of arc-continent collision; whereby the northern end of the Luzon (Philippines) island arc is colliding with the buoyant crust of the Eurasia continental margin offshore China. Along Taiwan’s west coast, and continuing south, this collision zone transitions into the eastward-oriented Manila subduction zone.

Because of its plate boundary location, Taiwan commonly experiences moderate-to-large earthquakes. The region within 250 km of today’s earthquake has hosted 184 other M6+ earthquakes over the preceding century; 25 of these were M7+. These include a M7.1 earthquake in September 1922, 25 km to the northeast of the February 6, 2018 earthquake, and a M7.1 event in March 2002, 55 km to the northeast. The 2002 event resulted in at least 5 fatalities, over 200 injuries, 3 collapsed buildings and the destruction of over 100 houses in the Taipei area. The September 1999, M7.7 Chi Chi earthquake occurred in central Taiwan, 81 km to the southwest of today’s earthquake. That earthquake resulted in at least 2 297 fatalities, and caused damage estimated at $14 billion.