Following a drastic decrease in seismic activity since October 20, Indonesian authorities have lowered the alert status of Agung volcano to second-highest (3 of 4) on Sunday, October 29, 2017. The Aviation Color Code was also lowered, from Orange to Yellow. Some of the 140 000 evacuees are now allowed to return to their homes.

The radius of the volcano's danger zone has declined from 12 km (7.5 miles) to 7.5 km (4.5 miles) from the crater in the southern part of the volcano and to 6 km (3.7 miles) NNE of the crater. Authorities said the downgrade means villagers who evacuated but do not live in the new danger zone could return home, but should not approach the crater, which is still emitting smoke.

"The decision to downgrade Agung's status was made after several scientific indicators showed its activities were decreasing drastically," said government volcanologist Kasbani. "Tremors have reduced in number from about 1 000 a day to fewer than 400," he said. 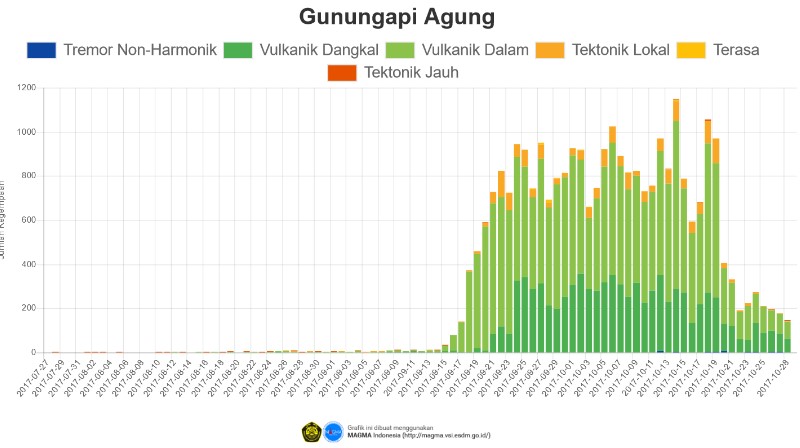 Thermal monitoring using ESA's Sentinel-2 satellite images, acquired during September and October 2017, shows that the intensity of thermal anomaly in October 2017 decreased compared to September 2017. The ASTER TIR Satellite Image also indicates a decrease in the area of heat within the crater.

Visual monitoring using drones conducted on October 29 showed that gas emissions in the crater have decreased in intensity, compared to October 20 condition.

The Aviation Color Code was lowered from Orange to Yellow. "Low pressure white plume, likely dominated by water vapor, was observed rising up to 250 m (820 feet) above the summit. This is 3 392 m (11 128 feet) above sea level," the Agung Volcano Observatory said in VONA issued 10:43 UTC, October 29.

"Although the status of the volcano has been lowered, it should be understood that volcanic activity at Agung has not completely abated and the volcano still has the potential to erupt," authorities said.

"Personally, I think there was also the pressure of the local authorities who had been asking the VSI for several days to lower the alert level of the volcano because tourism was affected by the situation on Mt Agung," said Claude Grandpey of Volcans et Glaciers.

"In addition," he said, "November 1st will be the beginning of the Galungan, a very important festival for the Hindu because it symbolizes the victory of good over evil. Many ceremonies are planned in temples that were located in the forbidden zone until now. Let’s cross our fingers and hope that Mt Agung will not wake up abruptly during the ten days of the festivities."