Indonesian authorities have raised the alert level for Lewotolo volcano to Level 2 (Alert) on Sunday, October 8, 2017 due to increased seismicity and degassing detected under the volcano since August 2017. The last eruption of this volcano started on January 2, 2012 and ended 12 days later. It had Volcanic Explosivity Index of 1.

Degassing and seismic activity under Lewotolo have increased significantly since August 2017 and especially since the end of September, suggesting a greater likelihood of a new eruption.

PVMBG noted that smoke from the volcano was seen rising as high as 600 m (1 968 feet) from the top of the 1 423-m-high (4668 feet) volcano since August 2017. The number of earthquakes increased from up to about 15 per day during August and September to more than 60 in the past couple of days. 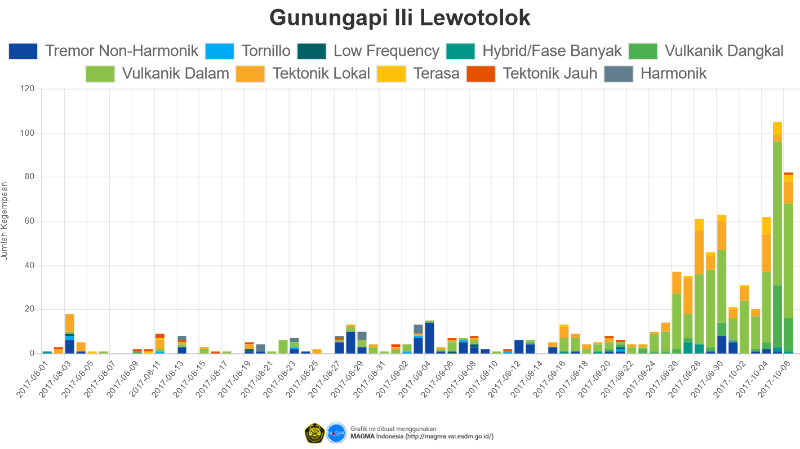 Authorities warned people living near the volcano and tourists not to climb the volcano. PVMBG recommended a 2 km (1.2 miles) exclusion zone.

Anchoring the eastern end of an elongated peninsula that is connected to Lembata (formerly Lomblen) Island by a narrow isthmus and extends northward into the Flores Sea, Lewotolo rises to 1 423 m (4 668 feet). Lewotolo is a symmetrical stratovolcano as viewed from the north and east.

A small cone with a 130-m-wide (126 feet) crater constructed at the SE side of a larger crater forms the volcano's high point. Many lava flows have reached the coastline. Historical eruptions, recorded since 1660, have consisted of explosive activity from the summit crater. (GVP)

Featured image: Lewotolo, seen here from the Flores Sea NW of the volcano, anchors the eastern end of the northern peninsula that is connected to Lomblen Island by a narrow isthmus. Many lava flows have reached the coastline of the peninsula. Historical eruptions from Lewotolo have been recorded since 1660 and have consisted of explosive activity from the summit crater. Photo by Rob McCaffrey, 1982 (Rensselaer Polytechnic Institute).