The eye of Category 5 Hurricane "Irma" passed over the small Caribbean islands of Antigua and Barbuda, one of the most prosperous Caribbean nations, around 06:00 UTC on September 6, 2017 with maximum sustained winds of 298 km/h (185 mph).

Irma then continued toward St. Barthélemy and St. Martin, equally strong, and then toward the British Virgin Islands and Puerto Rico.

As of 09:00 UTC on September 7, the hurricane has claimed at least 10 lives and the death toll is expected to rise.

Over the past 24 hours, Hurricane "Irma" has maintained maximum sustained winds of 185 mph), longer than any Atlantic hurricane on record. In fact, as of early September 7 (UTC), Irma has had winds of 298 km/h (185 mph) for 33 hours. No other tropical cyclone around the globe has been this strong for so long in satellite era (since 1966).

On its path toward Florida, Irma is expected to pass directly over the Turks and Caicos Islands and The Bahamas, still as a Category 5 hurricane, pushing a storm surge of seawater 4.6 to 6 m (15 to 20 feet).

This is expected to happen within the next 72 hours, and Irma is expected to approach Florida late Saturday or early Sunday, September 10, as extremely dangerous Category 4 hurricane.

At least one person died in Anguilla (population 12 316), British overseas territory, where police stations, hospitals, school facilities, three or four emergency shelters, a home for the infirm and the aged, as well as the fire station, along with many homes, had been damaged or destroyed. The British government has been accused of a failure to respond speedily to the devastation.

According to authorities, initial reports out of Barbuda (population 1 800) mention 95% of homes are damaged or destroyed and at least one person killed. Visiting Barbuda, Prime Minister Gaston Browne said it's absolute devastation.

"The island is literally under water. In fact, I'm of the view that, as it stands now, Barbuda is barely habitable".

"The telecommunications system in Barbuda was wiped out and cell towers were knocked over," Browne said. "Both the island's hotels were demolished," he added. Recovery efforts are expected to take months or years.

On the other hand, its sister island Antigua (population 80 161) escaped major damage, with no loss of life.

The French government has confirmed widespread flooding and power outages on the island. The damage in St. Barthélemy (population 9 279) is being described as "devastating" and "apocalyptic."

St. Martin (population 36 824) authorities say the island is almost completely destroyed. At least 8 people have been killed there, and the death toll is expected to rise.

Devastating damage was also reported in the Dutch section of St. Martin, known as Sint-Maarten (population 40 917). Their airport, the third largest in the Caribbean, has been destroyed.

The British Virgin Islands sustained significant damage, too, as the center of the hurricane passed right over its northern region. Reports from the islands are still scarce, but we know that critical facilities, homes, businesses, and supermarkets have been devastated.

US president declared a state of emergency in US Virgin Islands, which was also struck by Irma, although without landfall. There are reports, however, of extensive damage to buildings, and of land entirely stripped of vegetation.

Powerful winds and heavy rain left most of Puerto Rico (population 3.7 million) without power, tens of thousands without water and many areas under flash flooding. The center of Hurricane "Irma" passed just north of the island.

Irma is still extremely dangerous, potentially catastrophic hurricane, now moving toward the Turks and Caicos Islands, The Bahamas and eventually Florida where Governor Rick Scott already declared a state of emergency and issued mandatory evacuation orders for Miami Dade and Monroe Counties and voluntary for Broward and Collier Counties. Additional orders are expected as the storm nears the state.

Officials from Turks and Caicos to Florida pleaded with people to heed advisories to evacuate to shelters and higher ground. Hubert Minnis, the prime minister of Bahamas, said they are evacuating people from six islands to the capital Nassau, in the largest storm evacuation in the country's history.

Some fluctuations in intensity are likely during the next day or two, but Irma is forecast to remain a powerful category 4 or 5 hurricane during the next couple of days. 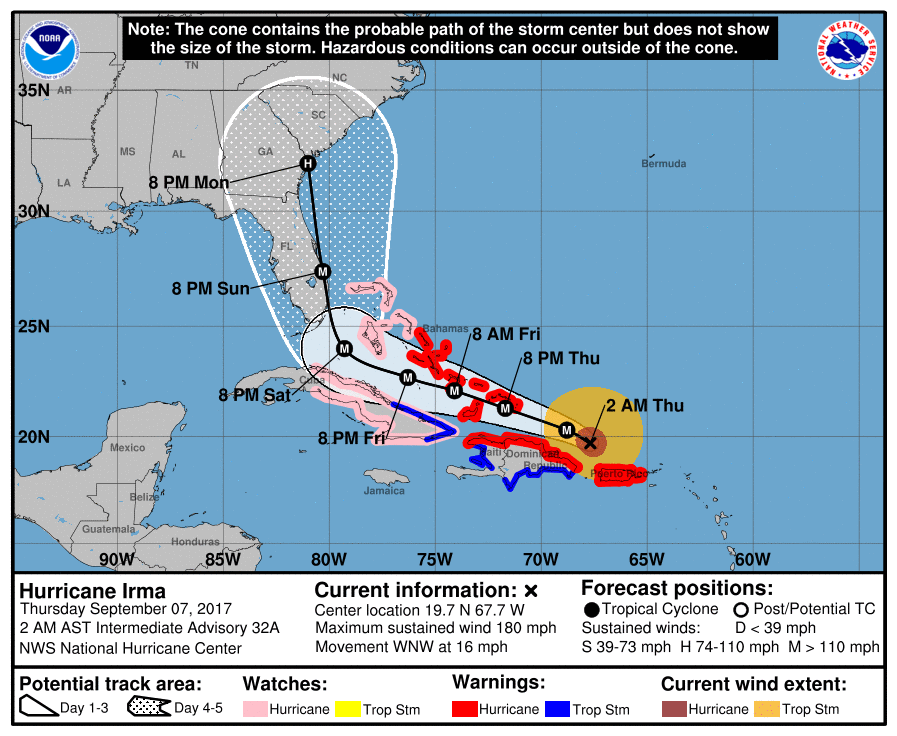 The combination of a life-threatening storm surge and large breaking waves will raise water levels ABOVE NORMAL TIDE LEVELS by the following amounts within the hurricane warning area near and to the north of the center of Irma. Near the coast, the surge will be accompanied by large and destructive waves.

The combination of a life-threatening storm surge and the tide will cause normally dry areas near the coast to be flooded by rising waters moving inland from the shoreline. The water is expected to reach the following HEIGHTS ABOVE GROUND if the peak surge occurs at the time of high tide:

Water levels in the U.S. and British Virgin Islands will gradually subside tonight and early Thursday.

Hurricane conditions are expected to begin in the warning area in the southeastern Bahamas and the Turks and Caicos Islands later today with tropical storm conditions expected within the next several hours.

These conditions will spread into the Central Bahamas by Thursday night or early Friday.

Irma is expected to produce the following rain accumulations through Saturday:

In all areas, this rainfall may cause life-threatening flash floods and mudslides.

Hurricane "Irma" is being slowly trailed by Hurricane "Jose," anticipated to affect the northern Leeward Islands in a couple of days. 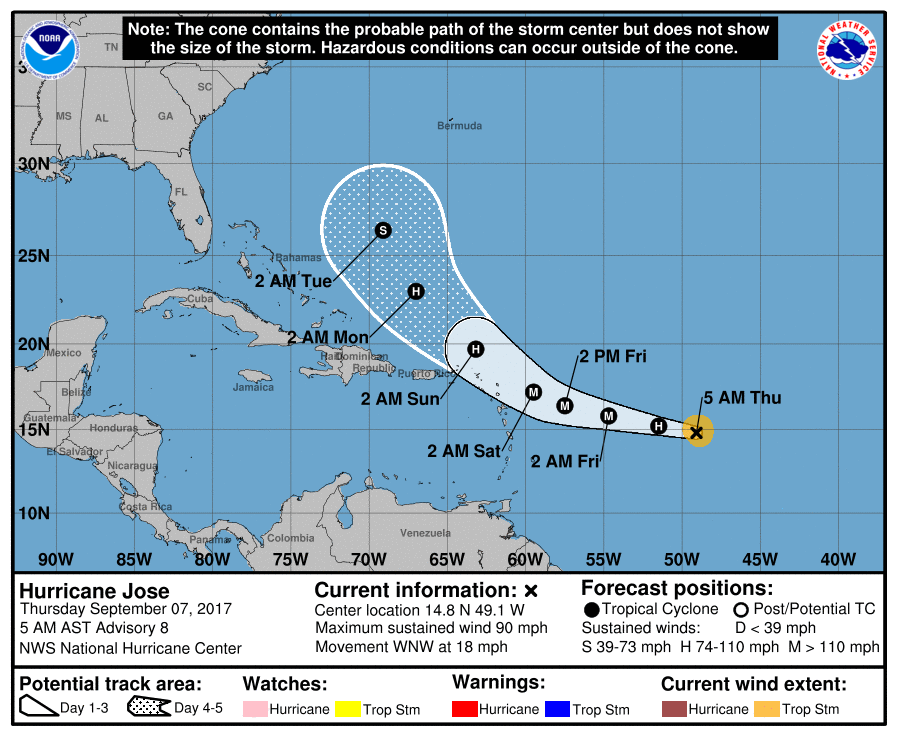