Tropical Storm "Fernanda" (Six-E) formed in the Eastern Pacific Ocean at 15:00 UTC on July 12, 2017 as the sixth named storm of the 2017 Eastern Pacific hurricane season. Fernanda is well off the coast and is expected to remain there before it dissipates. Additional strengthening is expected during the next 2 to 5 days and Fernanda could become a category 2 or 3 hurricane within the next 120 hours.

Convection associated with Tropical Depression Six-E has become better organized during the past several hours, NHC noted 15:00 UTC today. While the cyclone is still being affected by northeasterly vertical wind shear, an area of convection has formed over the low-level center and outer convective bands are present in the southwestern semicircle. An average of various satellite intensity estimates is 65 km/h (40 mph), and based on this the depression is upgraded to Tropical Storm "Fernanda."

At 15:00 UTC on July 12, the center of Tropical Storm "Fernanda" was located about 1 225 km (760 miles) south of the southern tip of Baja California Peninsula. Fernanda is moving toward the west near 17 km/h (10 mph), with the minimum estimated central pressure of 1006 hPa. 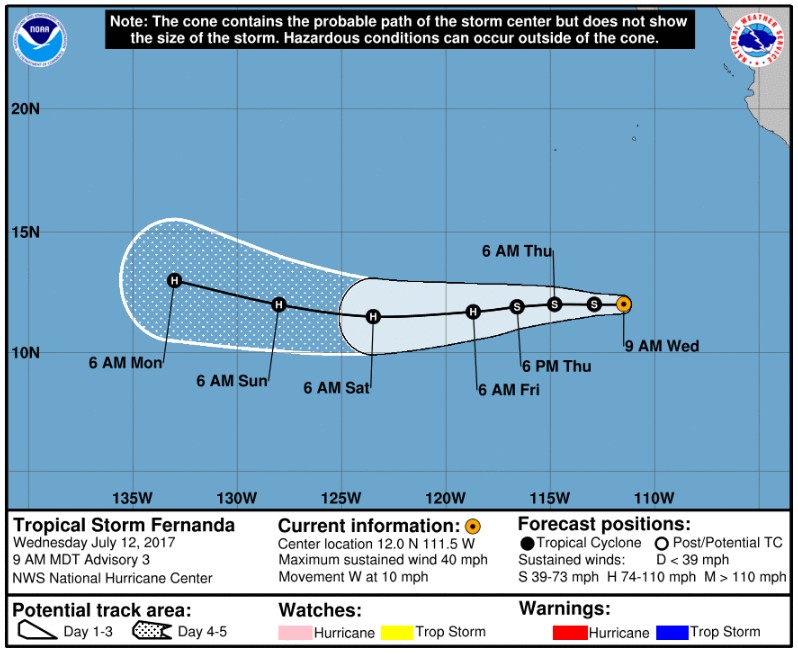 Westward motion is expected to continue with some increase in forward speed during the next couple of days. Tropical-storm-force winds extend outward up to 55 km (35 miles).

NHC's latest intensity forecast calls for gradual strengthening during the first 24 – 36 h, followed by a faster rate of development from 36 – 72 h.

"While the environment is not currently conducive for rapid intensification, it may become more favorable once the shear decreases," NHC noted.