A major winter storm hit South Africa's province of Western Cape and the Cape Town metropolitan area around 23:00 SAST (21:00 UTC) on Tuesday, June 6, 2017, and intensified on Wednesday morning. It brought powerful winds, huge waves and coastal flooding, frequent lightning, heavy rain and snow at higher elevations. By 16:00 UTC, it claimed the lives of at least 8 people.

Gale force winds and heavy rain associated with the worst storm to hit the region in 30 years brought Cape Town and neighboring cities to a standstill on Wednesday morning. Local media dubbed it 'the mother of all storms,' while South African Weather Service forecasters are unofficially calling it 'one hell of a storm.' Take a look at the image below and you'll see why. 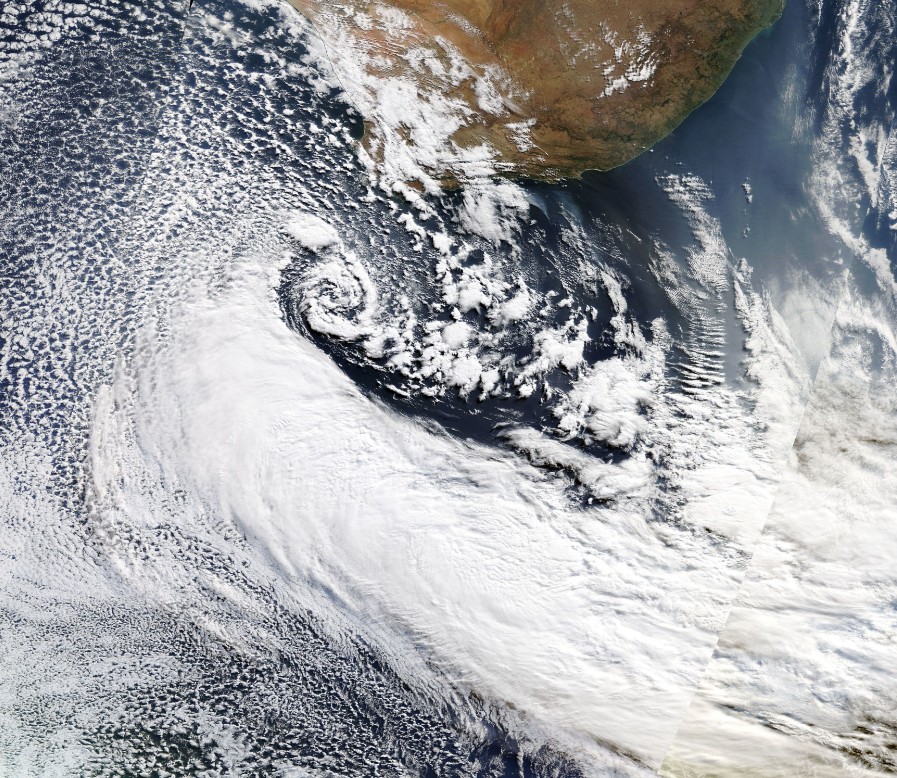 Wind gusts in excess of 80 km/h (50 mph) brought destruction throughout the region, leaving thousands of people homeless. According to the City of Cape Town Disaster Management, around 700 structures in the city have been affected by flooding.

The storm left at least 8 people dead and many injured. A family of four was killed in Kraaifontein due to a fire caused by lightning. One elderly man died in Lavender Hill after his informal building collapsed.

This is the house in Kraaifontein where two adults and a set of 4-year old twins died in a fire allegedly caused by lightning. #CapeStorm pic.twitter.com/Yknh3QVnCT

At the same time, a massive wildfire, fueled by strong winds ahead of the cold front, is spreading through Southern Cape, forcing evacuations and road closures. At least one home has been gutted today, resulting in deaths of three family members in Rheenendal.

More rain and strong winds are expected into Thursday, but the worst of the storm has passed.

The storm came amid the worst drought the region has seen in more than 100 years, but experts predict it will take at least 3 wet winters to replenish drinking water supplies.

Cape Town's mayor, Patricia de Lille, urged residents, where possible, to use suitable containers to capture rainwater. "As a result of climatic unpredictability, no one is able to definitely predict when our next big rainfall will occur. We must, therefore, continue to save water."

"I appeal to all residents to take care and be extra cautious on the roads. Please take all necessary measures to ensure the safety of your loved ones, pets, property and possessions," she said.

Schools across the Western Cape are closed today, and are expected to re-open tomorrow, June 8, provincial authorities said.