A massive wildfire is burning south of Tucson, Arizona, producing a ton of heat and its own weather. Named Sawmill Fire, it is one of Southern Arizona's largest wildfires in recent memory.

The Sawmill Fire is burning on lands under the jurisdiction of the Coronado National Forest, Bureau of Land Management and the Arizona Department of Forestry and Fire Management.

It was started at approximately 18:00 UTC (11:00 MDT) on Sunday, April 23, 2017, by a target shooter who was firing at explosive targets at state land. According to the Green Valley News, the man tried to extinguish the blaze before calling to report the fire to authorities. He later turned himself in.

So far, there are no reports of injuries or damaged structures but there are homes, ranches and outbuildings as well as communications facilities and power lines at risk.

The fire has crossed Arizona Highway 83 in multiple locations. 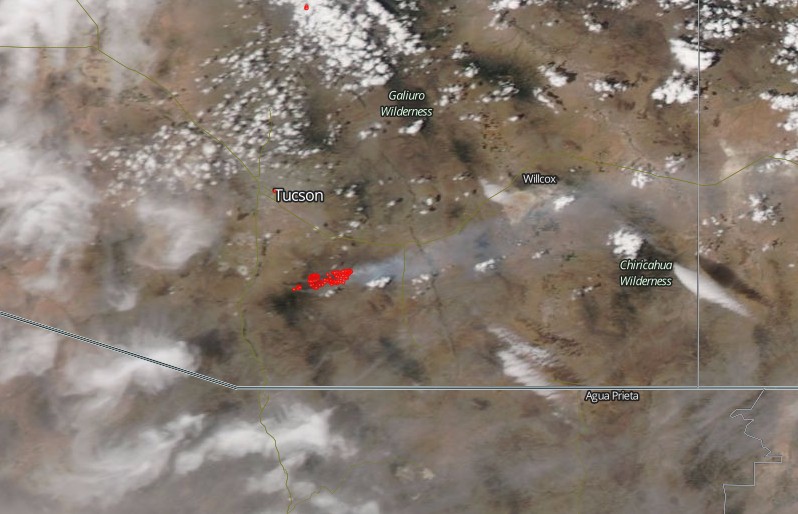 The fire has doubled in size, up to 16 331 hectares (40 356 acres). This figure is based on a visual estimate from a midday aerial reconnaissance flight and may change as a result of additional incident mapping and fire growth.

The fire is 20% contained and there are 606 firefighters on the scene.

Winds will be on the upswing Thursday, contributing to a Red Flag Warning in effect from noon until 19:00 local time. Critical fire weather conditions will peak on Friday with very strong, gusty winds that will continue into Saturday.

A Type I Incident Management Team will assume command of the Sawmill Fire today in response to increasing complexity.