A new hydrothermal eruption was observed at New Zealand's Lake Rotorua at 15:30 UTC on November 27, 2016, prompting an evacuation of at least one house near the lake. The style of the eruption was one which hadn't been seen in Rotorua since about 2000 or 2001 and was slightly anomalous, GeoNet said. The geyser was reportedly as high as 30 m (100 feet).

Lani Kereopa, who lies in Ohinemutu Village, on the edge of the lake, reported six or seven loud thuds followed by spraying sound at 15:30 UTC on Sunday (04:30 NZST on Monday, November 28). There had been several reports of the eruption from people living in the village who had been woken by the noise, GeoNet said.

Kereopa said she initially thought it might be roadworks or fireworks, 'but it was 04:30 in the morning so I thought it can't be [that]." 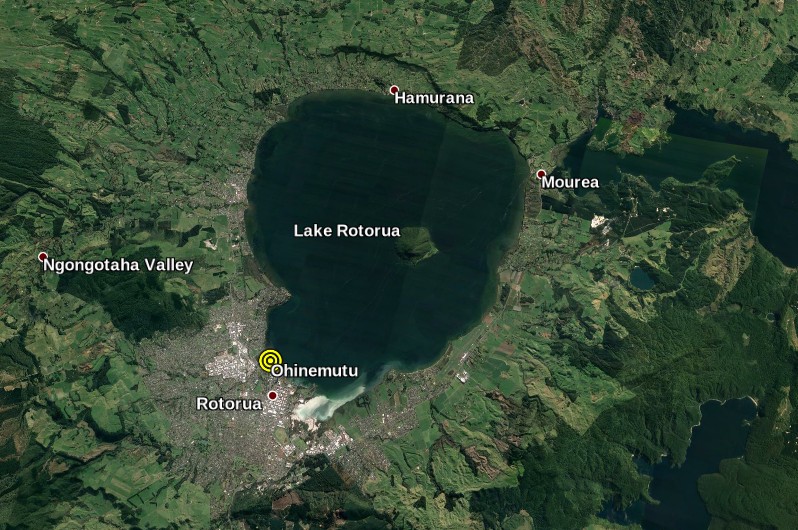 "So I laid in bed, just trying to figure out what that could have been. Then another one happened so I stood up, looked out the window. I was looking around at the village and it was pitch black, so I was thinking, well, nothing much looks different, even though it was dark and that's when I saw water spraying up out of the lake, about 20 meters [65 feet] or so."

"The spray was at the the mouth of Lake Ruapeka – higher than the Pohutu [Geyser] and it was a whole lot of water."

Kereopa said growing up in the past she was used to geothermal activity but had never experienced something on this scale.

She added friends told her there had been activity in that same area previously so "that gives me a little hope that we're not in the early stages of an eruption."

According to the NZHerald, GNS has confirmed the hydrothermal eruption, with duty volcanologist Brad Scott describing it as unusual.

The style of the eruption was one which hadn't been seen in Rotorua since about 2000 or 2001 and was "slightly anomalous," he said.

Scott added the last significant steam eruptions in Rotorua were about 15 years ago, and they weren't sure why it had happened again.

"Eruptions have been known in this area all through our written history (1830 – present), so it’s not too unusual," he said in his latest update.

The occurrence of steam eruptions has been variable in Rotorua, with many during the exploitation of the geothermal system, however, they declined after the bore closure in 1987.

"We’ll be keeping a close eye on this latest hydrothermal eruption but, as this is pretty much business as usual for this system, we aren’t too concerned about it. We went down to check out the eruption and it didn't leave much interesting evidence," Scott concluded.

On November 30, 2016, another hydrothermal eruption occurred at the lake. Read more about it, here.

The 22-km-wide Rotorua caldera is the NW-most caldera of the Taupo volcanic zone. It is the only single-event caldera in the Taupo Volcanic Zone and was formed about 220,000 years ago following eruption of the >340 cu km rhyolitic Mamaku Ignimbrite. Although caldera collapse occurred in a single event, the process was complex and involved multiple collapse blocks.

The major city of Rotorua lies at the south end of the lake that fills much of the caldera. Post-collapse eruptive activity, which ceased during the Pleistocene, was restricted to lava dome extrusion without major explosive activity. The youngest activity consisted of the eruption of three lava domes less than 25,000 years ago. The major thermal areas of Takeke, Tikitere, Lake Rotokawa, and Rotorua-Whakarewarewa are located within the caldera or outside its rim, and the city of Rotorua lies within and adjacent to active geothermal fields. (GVP)