A new eruptive phase has started at Peru's Sabancaya volcano with a violent explosion registered at 01:42 UTC on Monday, November 7, 2016, INGEMMET-OVI said. Since then, the volcano is constantly emitting steam and ash. Ashfall is reported in communities up to 35 km (22 miles) from the volcano. The closest town is 20 km (12.4 miles) to the NE, in the Colca Valley, but there are some villages and communities in the vicinity.

Although this is the second reported explosion at Sabancaya this year, INGEMMET said it represents the beginning of a new eruptive phase of the volcano after being dormant for 18 years. Sabancaya's last eruptive phase lasted for 8 years, between 1986 and 1998. Sabancaya has been constantly monitored since 2013 after a new period of seismic unrest started.

A sharp increase in seismicity associated with the rise of magma was registered during the first week of October 2016 and was followed by the onset of fumarolic activity.

During the last couple of weeks, volcanic gas emissions increased significantly, reaching values of up to 7 173 tons per day on October 23. A thermal anomaly was first observed on November 2.

The Technical and Scientific Committee for volcanic risk management of Arequipa region increased alert level to yellow and warned people not to aproach the volcano. 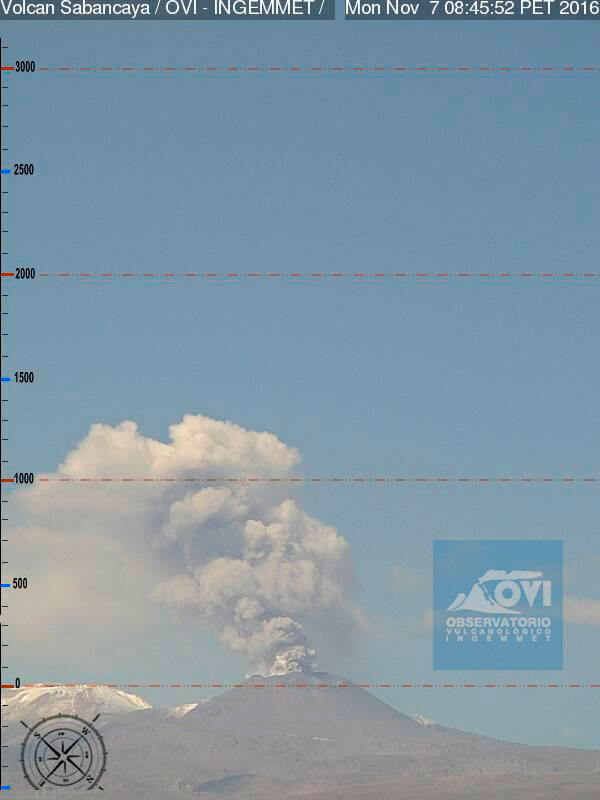 A violent explosion on November 7 marks the beginning of a new eruptive phase at Peru's Sabancaya volcano. Credit: INGEMMET/OVI

A significant increase in ash emissions was observed on November 9, prompting authorities to issue ashfall alerts in Parjo, Cajamarcana and Salalli. Ash was reaching a height of 2 km (6 561 feet) above the crater and was scattered within 10 km (6.1 miles).

By November 10, ashfall was reported in communities located between 30 and 35 km (19 – 22 miles) from the crater. INGEMMET said ashfall affected the towns and villages of Parjo, Cajamarcana, Sallalli, Pampasepina, Hornillo, Patamapa, Yanque, Coporaque, Ichupampa, Achoma and Chivay, the latter of which is the capital of Caylloma. The agency recommended that authorities implement measures to help protect the local population, mainly by distributing masks to prevent breathing problems. 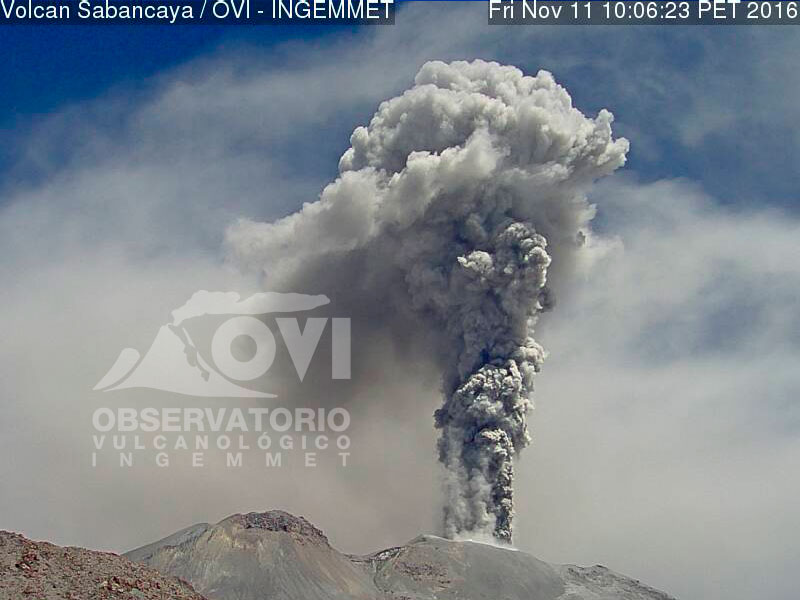 With the activity at Ubinas and the new eruptive phase at Sabancaya, Peru now has two simultaneously erupting volcanoes for the first time in recorded history.

Although they are both located in the southern part of the country, scientists say this is merely a coincidence since they are separated by some 100 km (62 miles) and do not share any underground connection or magma chambers.

Inspecting the impact of the ashfall. Video courtesy IGP

Sabancaya, located on the saddle between 6288-m-high Ampato and 6025-m-high Hualca Hualca volcanoes, is the youngest of these volcanic centers and the only one to have erupted in historical time. The oldest of the three volcanoes, Nevado Hualca Hualca, is of probable late-Pliocene to early Pleistocene age. Both Nevado Ampato and Nevado Sabancaya are only slightly affected by glacial erosion and consist of a series of lava domes aligned along a NW-SW trend.

The name of 5967-m-high Sabancaya (meaning "tongue of fire" in the Quechua Indian language) first appeared in records in 1595 CE, suggesting activity prior to that date. Holocene activity has consisted of plinian eruptions followed by emission of voluminous andesitic and dacitic lava flows, which form an extensive apron around the volcano on all sides but the south. Records of historical eruptions date back to 1750. (GVP)