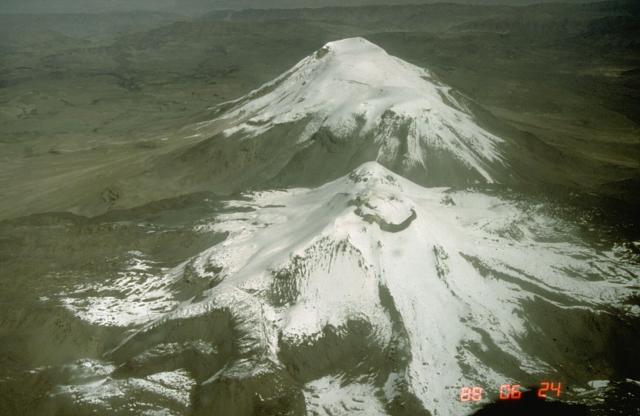 Increased activity with numerous earthquakes was reported at stratovolcano Sabancaya, Peru, suggesting possible eruption in near future. Increase in seismic activity – 536 earthquakes between February 22 and 23, 2013 – was observed along with continuous emissions from fumaroles (openings in Earth's crust).

A report issued on February 24, 2013 by the Directorate of Environmental Geology and Geological Hazard (DGAR) of the Institute of Geology, recommended Office of Civil Defense Regional Government of Arequipa to raise the alert level to yellow and to prepare for a probable volcanic eruption.

INGEMMET (Institute of Geology, Mining and Metallurgy) has deployed three seismic stations, one differential GPS for deformation monitoring, visual surveillance cameras and monitors for monitoring the seismic activity of the volcano and fumaroles. Also, a camp has been setup near the volcano Sabancaya.

Sabancaya, located on the saddle between 6288-m-high Ampato and 6025-m-high Hualca Hualca volcanoes, is the youngest of these volcanic centers and the only one to have erupted in historical time. The oldest of the three volcanoes, Nevado Hualca Hualca, is of probable late-Pliocene to early Pleistocene age. Both Nevado Ampato and Nevado Sabancaya are only slightly affected by glacial erosion and consist of a series of lava domes aligned along a NW-SW trend. The name of 5967-m-high Sabancaya (meaning "tongue of fire" in the Quechua Indian language) first appeared in records in 1595 AD, suggesting activity prior to that date. Holocene activity has consisted of plinian eruptions followed by emission of voluminous andesitic and dacitic lava flows, which form an extensive apron around the volcano on all sides but the south. Records of historical eruptions of Sabancaya date back to 1750.