Explosive-extrusive eruption continues at the Sheveluch volcano, Kamchatka, KVERT reported on October 14, 2016. Volcanic explosions have sent ashes drifting to the northwest up to 6.5 to 7 km (21 325 to 22 965 feet) above the sea level. The aviation color code remains at orange.

According to Kamchatkan Volcanic Eruption Eruption Response Team (KVERT), an ash explosion at Sheveluch could occur at any time, sending ashes up to 10 km (32 800 feet) above the sea level. The reported ashes have drifted 10 km (6 miles) to the northwest.

Ongoing volcanic activity can affect the international and low-flying aircraft, prompting the aviation color code to remain at orange. The current color code means the volcano is showing signs of heightened unrest with increased likelihood of and eruption, or that the volcanic eruption is already underway with no or minor ash emission. 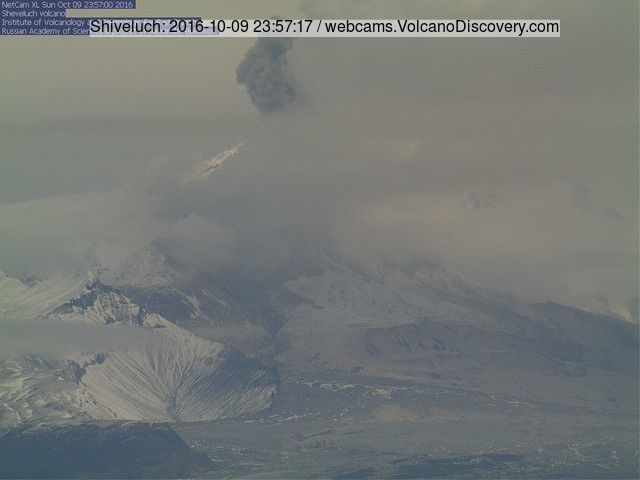 Ash plume from an explosion at Sheveluch volcano on the morning of October 9, 2016 (local time). Image credit: KVERT

Volcano Discovery reported the lava dome is still active with no significant change following the major collapse event three weeks ago, on October 10. Glowing rockfalls and occasional block and pyroclastic flows have been reported to descend the western canyon, resulting from instabilities and continued growth. Small to moderate explosions have become more frequent, as they were occurring at rates of 1-2 per day.

According to KVERT, in the period between September 30 and October 7, the lava-dome extrusion onto Sheveluch's northern flank was accompanied by strong fumarolic activity, dome incandescence, ash explosions, and hot avalanches. GVP reports the satellite images showing a daily thermal anomaly over the dome during the period between October 2 and 3 and 5 and 6. Between October 3 and 4, re-suspended ash formed a plume which drifted about 280 km (174 miles) east and southeast while the aviation color code remained orange throughout the time.

The high, isolated massif of Sheveluch volcano (also spelled Shiveluch) rises above the lowlands NNE of the Kliuchevskaya volcano group. The 1300 cu km (311.9 cu miles) volcano is one of Kamchatka's largest and most active volcanic structures. The summit of roughly 65 000-year-old Stary Shiveluch is truncated by a broad 9-km-wide late-Pleistocene (5.6 miles) caldera breached to the south. Many lava domes dot its outer flanks. The Molodoy Shiveluch lava-dome complex was constructed during the Holocene within the large horseshoe-shaped caldera; Holocene lava dome extrusion also took place on the flanks of Stary Shiveluch.

Featured image: Ash plume from an explosion at Sheveluch volcano on the morning of October 9, 2016 (local time). Image credit: KVERT