On Wednesday, August 31, 2016, some 24 hours before Tropical Storm "Hermine" makes landfall, Florida Governor Rick Scott has declared a state of emergency for 42 counties, covering all of Central Florida, except for Osceola County. Current models show Hermine could be near hurricane strength before it makes landfall sometime late Thursday (local time), September 1. Hermine is now the 4th Atlantic tropical cyclone to form this month.

“It is crucial that every Floridian has a plan in place to ensure their families, homes and businesses are fully prepared. Floridians can make their own plan at FLGetaPlan.com," Governor Scott said in a statement.

"I have been closely monitoring this storm’s development and our emergency management officials have been working hard to make sure we are ready to respond to any potential impacts. By declaring a state of emergency in advance of this storm, we are ensuring that state, regional and local agencies can work together to meet the needs of our communities. We will continue to do all we can to keep our families and visitors safe and informed as this storm approaches our state," Scott added.

At 15:00 UTC on August 31, Hermine was still Tropical Depression Nine with maximum sustained winds near 55 km/h (35 mph). It was nearly stationary but expected to resume heading for the Florida Gulf Coast today and strengthen, NHC said.

At the time, its center was located about 665 km (415 miles) WSW of Tampa and 640 km (395 miles) SSW of Apalachicola, Florida. A north-northeastward motion is expected to begin later today, and a turn toward the northeast with increasing forward speed is expected on Thursday, September 1.

Additional strengthening is forecast during the next day or two, and Hermine could be near hurricane strength by the time landfall occurs.

The combination of a dangerous storm surge and the tide will cause normally dry areas near the coast to be flooded by rising waters moving inland from the shoreline. There is a danger of life-threatening inundation within the next 36 to 48 hours along the Gulf coast of Florida from Aripeka to Indian Pass.

The water could reach the following heights above ground if the peak surge occurs at the time of high tide: 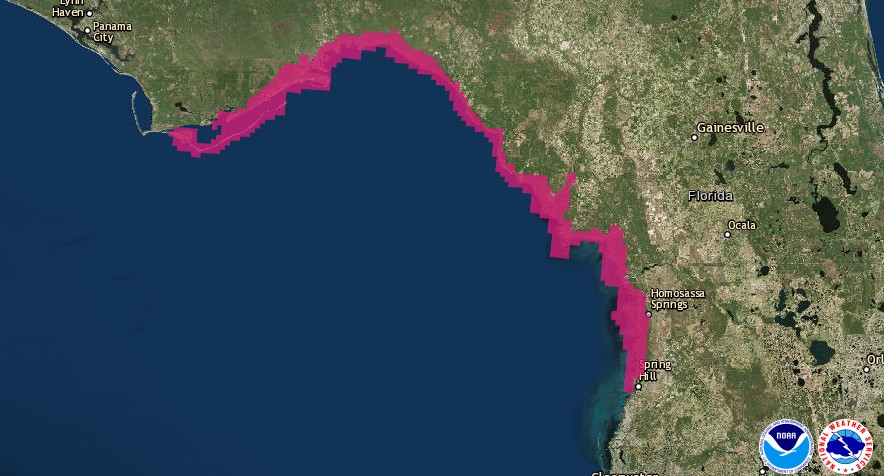 Hermine is expected to produce additional rain accumulations of 50.8 to 101.6 mm (2 to 4 inches) over western Cuba through today, with maximum storm total amounts up to 508 mm (20 inches). These rains could cause life-threatening flash floods and mudslides.

Storm total rainfall amounts of 127 to 254 mm (5 to 10 inches) are possible over portions of central and northern Florida through Friday, with isolated maximum amounts of 381 mm (15 inches) possible. Coastal areas of Georgia and the Carolinas are expected to receive storm total rainfall of 101.6 to 177.8 mm (4 to 7 inches), with local amounts of 254 mm (10 inches) possible through Saturday morning. These rains may cause flooding and flash flooding.

A few tornadoes are possible Thursday afternoon into Thursday night over north Florida and southeast Georgia.