A group of experts utilized the data collected by the ESA's SWARM satellites to show how the magnetic field is pulsating, where it's weakening and strengthening, and how fast these changes occur. For the first time, experts have mapped both the changes occurring in the liquid iron inside our planet and the field surrounding it, revealing that the two are closely connected.

New research results have been presented in the form of animation, showing the Earth's pulsating magnetic field and its changes in the period between 1999 and May 2016, at this week's Living Planet Symposium in Prague.

The animation above shows the weakening and strengthening of the magnetic field (blue and red colors). According to the research, during the observed period, the magnetic field has weakened by approximately 3.5% at higher latitudes over North America and strengthened about 2% over Asia. The field's South Atlantic Anomaly, an area of the weakest field, has been continually moving westward while weakening by further 2%.

At the same time, the magnetic north pole has been moving eastward, toward Asia.

The changes occurring in the magnetic field in the period between 2000 and 2015 have been depicted in a second animation, shown below.

“Swarm data are now enabling us to map detailed changes in Earth's magnetic field, not just at Earth's surface but also down at the edge of its source region in the core. Unexpectedly, we are finding rapid localized field changes that seem to be a result of accelerations of liquid metal flowing within the core,” said Chris Finlay, a senior scientist at DTU Space in Denmark.

“Two and a half years after the mission was launched it is great to see that Swarm is mapping the magnetic field and its variations with phenomenal precision. The quality of the data is truly excellent, and this paves the way for a profusion of scientific applications as the data continue to be exploited,” said Rune Floberghagen, ESA’s Swarm mission manager.

Further research based on the measurements from the ESA's SWARM mission will highly likely generate more new insights on the unfolding processes within the depths of our planet and the effects of solar activity on the space weather.

The combined information could help us understand the pulsating behavior of the Earth's magnetic field and its global weakening trend.

Earth's magnetic field can be visualized as a giant bubble that shields the surface from incoming cosmic radiation and electrically charged particles of solar winds. It's invisible to a naked eye, but, in combination with a complex system of the planet's electric currents, strongly impacts our lives on daily basis. 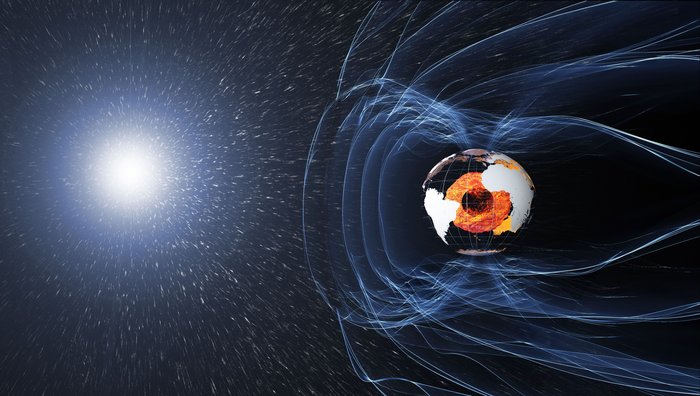 The force that protects our planet. Credit: ESA/ATG medialab

The magnetic fields are mainly produced by a giant pool of molten, swirling liquid iron in the Earth's outer core, 3 000 km (1 864 miles) below the surface. Its behavior can be compared to the one of a spinning conductor in a bicycle dynamo, generating electrical currents which, in turn, constantly affect the electromagnetic field.

The scientists think that accelerations in field strength are related to changes in the flow and oscillations of the liquid iron.

Research results from 2014 suggest our planet's magnetic field is weakening 10 times faster than previously thought, losing 5% of its strength every ten years.

One of the explanations of the observed magnetic field weakening trend is that the magnetic poles are preparing to flip.

This phenomenon occurs approximately every 100 000 years, and the exact effects are unknown.

Swarm is ESA’s first satellite constellation for Earth observation. The three identical satellites are launched together on one rocket. Two satellites orbit almost side-by-side at the same altitude – initially at about 460 km (285.8 miles), descending to around 300 km (186.4 miles) over the lifetime of the mission. The third satellite is in a higher orbit of 530 km (329.4 miles) and at a slightly different inclination.

The satellites are equipped with vector field magnetometer, absolute, absolute scalar magnetometer, electric field instrument, accelerometer, GPS receiver, startrackers, and a laser retroreflector. The different orbits and various instrumentation enable the satellites to optimize the data sampling and, thus, distinguish between the effects of different magnetic sources and strengths.

ESA's SWARM satellite constellation has been measuring the magnetic signals from Earth's core, mantle, crust, ionosphere, magnetosphere and the oceans since its launch in November 2013, allowing the scientists to map our planet's magnetic field in great detail.

Featured image: The magnetic field and electric currents in and around Earth generate complex forces strongly affecting our everyday lives. The field can be thought of as a huge bubble, protecting us from cosmic radiation and charged particles that bombard Earth in solar winds. Image credit: ESA/ATG medialab