On March 14, 2016, the seismic network at Mount St. Helens, Washington, US began detecting small magnitude volcano-tectonic earthquakes at a depth between 2 and 7 km (1.2 to 4 miles). Earthquake rates have been steadily increasing since March, reaching nearly 40 located per week. The swarm is likely associated with the recharge of the volcano, the Cascades Volcano Observatory (CVO) reported on May 5, 2016.

After the 2004 – 2008 eruption, subtle inflation of the ground surface and seismicity indicate that the magma reservoir beneath Mount St. Helens is slowly re-pressurizing, as it did after the conclusion of the 1980 – 1986 eruption. This is to be expected and it does not indicate that the volcano is likely to erupt anytime soon.

The  top plot is the number of located earthquakes per week from the Pacific Northwest Seismic Network's catalog. The bottom plot shows the earthquake depths with time.  Earthquakes are plotted as circles with the size of the circle corresponding to the magnitude of the earthquake (see legend).  Both plots show the time period from 1987 to September 2004, and 2008 to May 4 2016.  The 2004 to 2008 eruption at Mount St. Helens has been removed from this record for simplicity. Image credit: USGS/CVO

Over the last 8 weeks, there have been over 130 earthquakes formally located by the Pacific Northwest Seismic Network and many more earthquakes too small to be located, CVO said. They have low magnitudes of 0.5 or less and up to 1.3.

These earthquakes, too small to be felt at the surface, are volcano-tectonic in nature, indicative of a slip on a small fault. Such events are commonly seen in active hydrothermal and magmatic systems.

The magma chamber is likely imparting its own stresses on the crust around and above it, as the system slowly recharges. The stress drives fluids through cracks, producing the small quakes. 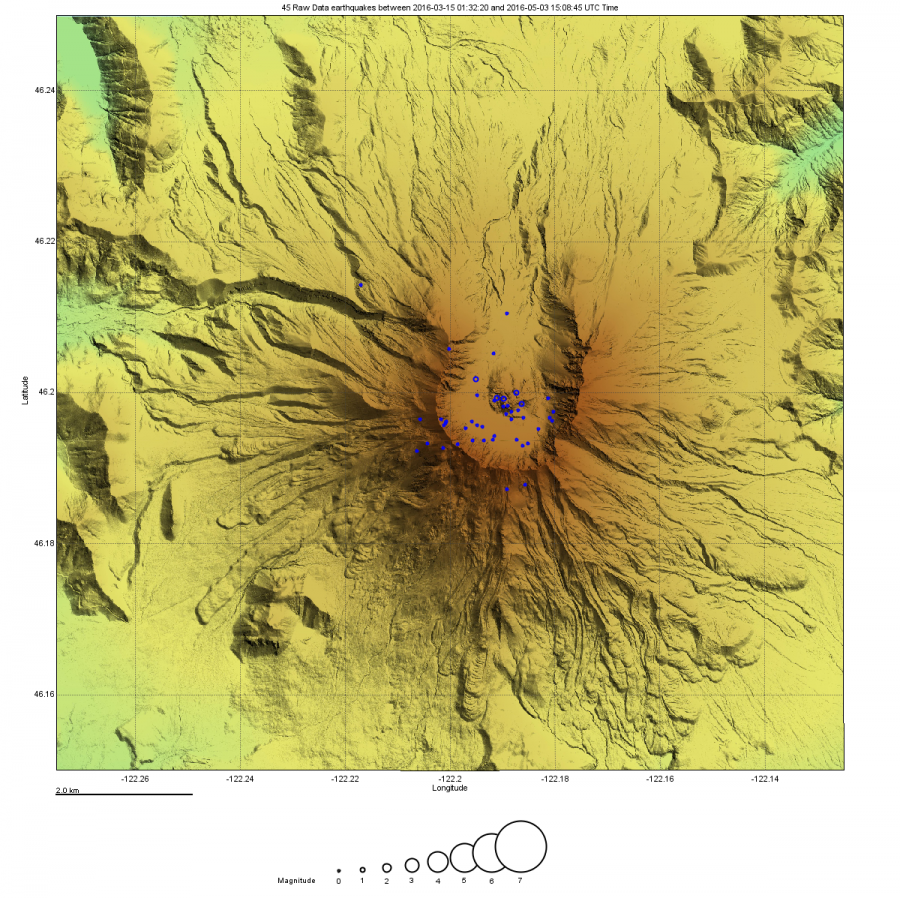 Map view plot of earthquakes located by the Pacific Northwest Seismic Network from March 14, 2016 through May 4, 2016.  Only high-quality locations are shown (8 or more observations with a 130-degree gap or less between observing stations). Image credit: USGS/CVO

The current pattern of seismicity is similar to swarms seen at Mount St. Helens in 2013 and 2014; recharge swarms in the 1990s had much higher earthquake rates and energy release.

No anomalous gases, increases in ground inflation or shallow seismicity have been detected with this swarm, and there are no signs of an imminent eruption.

As was observed at Mount St. Helens between 1987 – 2004, recharge can continue for many years beneath a volcano without an eruption. 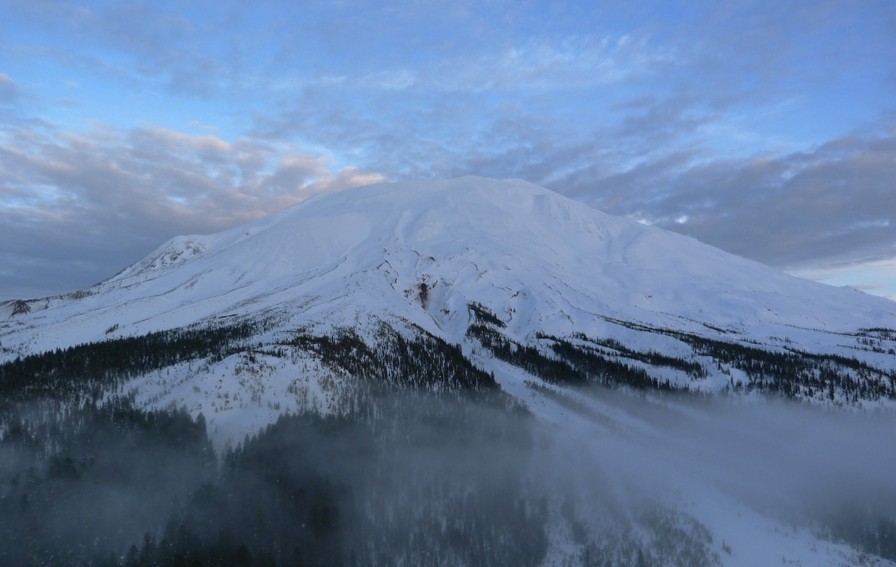 Prior to 1980, Mount St. Helens formed a conical, youthful volcano sometimes known as the Fuji-san of America. During the 1980 eruption, the upper 400 m of the summit was removed by slope failure, leaving a 2 x 3.5 km horseshoe-shaped crater now partially filled by a lava dome. Mount St. Helens was formed during nine eruptive periods beginning about 40-50,000 years ago and has been the most active volcano in the Cascade Range during the Holocene.

Prior to 2200 years ago, tephra, lava domes, and pyroclastic flows were erupted, forming the older St. Helens edifice, but few lava flows extended beyond the base of the volcano. The modern edifice was constructed during the last 2200 years, when the volcano produced basaltic as well as andesitic and dacitic products from summit and flank vents. Historical eruptions in the 19th century originated from the Goat Rocks area on the north flank, and were witnessed by early settlers. (GVP)