A series of small to moderate earthquakes shook Mount St. Helens volcano in Washington over the past couple of days. The largest was M3.9 at a depth of 10.2 km (6.2 miles) on January 3, 2018, followed by M2.7, M2.0 and M1.9. The quakes are believed to be tectonic in nature and not a sign of impending eruption. The last eruption of this volcano took place in 2008.

In total, the USGS registered 87 earthquakes under the volcano and in its immediate vicinity since December 29, 2017. Dozens of people reported feeling Wednesday's M3.9 quake, including those living in Portland 112 km (70 miles) away. This quake was followed by M2.7 just three minutes later and magnitude 2.0 and 1.9 over the next 2 hours. Those were the 4 strongest earthquakes in this sequence so far.

While the quakes left many local worried a new eruption is about to take place, officials are reassuring that the ongoing quakes are not believed to be connected with the magma in the volcano and instead are 'normal' shifting of the fault lines coincidentally close to the volcano.

"While this week's quakes might seem alarming, they are not a cause for concern," said Seth Moran, a seismologist and scientist-in-charge at the United States Geological Survey's Cascades Volcano Observatory.

This pattern is typical, predictable and not that impressive for the region, Morgan said. 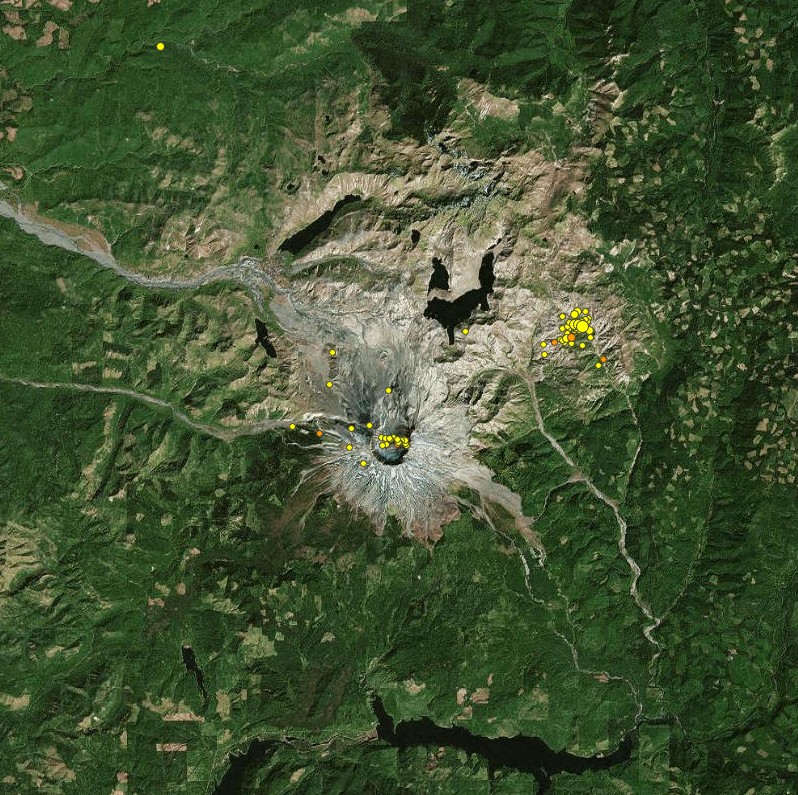 When the volcano became active again in 2004, the earthquakes started small and increased in strength and frequency over time instead of decreasing, as they have this week. There were also ground deformations and glacier cracks, he added.

The famous 1980 eruption of Mount Saint Helens blew out one side of the volcano, unleashing cascades of water, mud and rock down the valleys and killing 57 people, but the most hazardous volcano in Washington state is considered to be Mount Rainier, where volcanic mud flows, called lahars, roar down the Puyallup River drainage system every 500 to 1 000 years.

Due to the eruptions of 1980 – 86 and 2004 – 2008, Mount St. Helens has had the best seismic monitoring network of all volcanoes in the Cascade Range, CVO sates. It is also the most seismically active volcanoes in the Washington and Oregon Cascades.

In an average month, 22 events are located by the Pacific Northwest Seismic Network (PNSN), with the number going far higher during eruptive periods. Although a few seismic stations were installed near Mount St. Helens in the 1970s, the first complete network of stations was installed in 1980 in response to unrest starting in March of that year. Since then millions of earthquakes, as well as other non-earthquake signals (e.g., rockfalls, explosions, avalanches, glacier quakes, helicopters) have been recorded.

In addition to earthquakes that occur due to volcanic processes, seismicity at Mount St. Helens also occurs along tectonic faults, which are associated with motion in the crust and not with volcanic processes.

Many of these earthquakes occur along the Mount St. Helens seismic Zone (SHZ), which extends north-northwestwards to Morton, Washington and south-southeastwards to past the Swift Reservoir. 3 – 4 earthquakes per month occur along the SHZ, including a number of events that have been large enough to be felt in nearby communities.

This quake was followed over the next few hours by several aftershocks up to M2.8, CVO reported at the time.

All of the earthquakes were located about 8 km (5 miles) N of the crater, near the Johnston Ridge Observatory, at depths of about 4 – 6 km (2.5 – 3.7 miles). CVO also noted that a previous earthquake swarm had occurred in the same area on January 29.