A bright fireball was seen over Washington, D.C. shortly before 02:00 UTC on Wednesday, May 26, 2021 (22:00 LT on Tuesday, May 25). The American Meteor Society (AMS) received 23 reports from witnesses in Delaware, Maryland, Pennsylvania, Virginia, and Washington.

According to the AMS, the fireball traveled in a southeast to northwest direction over Washington. Most of the witnesses were in Maryland.

The meteor was seen by observers as far north as Johnstown, Pennsylvania, and as far south as Suffolk, Virginia.

"[It] was a partially cloudy night and that created an extraordinary glow," said a watcher from Spotsylvania Courthouse, Virginia.

"It was very green," said another witness in the same state, who reported that the fireball lasted around 3 seconds. 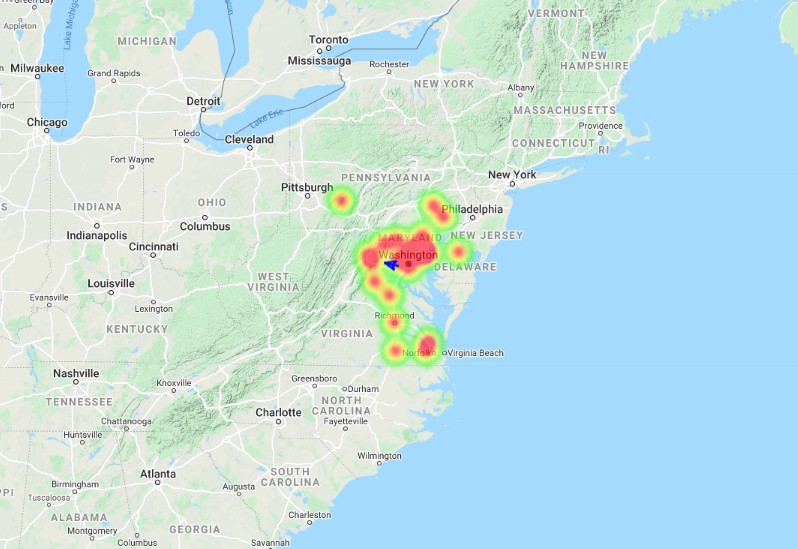 Another viewer from Virginia named Stephen M. wrote, "[It] appeared completely out of nowhere," adding that the object burst around five seconds, followed closely by a trail of light to a southwest direction. "Almost left the field of view as I was looking at the full moon."

Kim S. from Halethorpe reported her experience witnessing the phenomenon, saying, "That was one of the most beautiful things I have ever seen. [It] came from somewhere that no man could have made and just to see that made me feel lucky." She added, "I will never forget this as long as I live."