NASA's research team conducted a study on 30-years of satellite data to reveal that a recorded trend of high altitude clouds in the mid-latitude which are shifting toward the poles is primarily caused by the expansion of the tropics.

One of the most important mediators of heat reaching our planet's surface are the clouds. In their absence, the ocean or vegetated lands absorb the incoming heat. However, when present, the could's tops reflect the coming radiation and cause the surface cooling. The distribution of cloud patterns strongly impacts the Earth's climate, and understanding of the cloud migration is important to predict the changes affecting Earth's climate.

NASA's scientists have explored the air currents responsible for shifting the clouds at high altitude, in the range between about 5.6 and 9.7 km (3.5 and 6 miles), polewards. According to previously conducted study, the climate change was shifting storms and the jet streams, toward the poles, the motion which was, in turn, driving the movement of the clouds.

The researchers have analyzed the 30-year record of detailed cloud observations from the International Satellite Cloud Climatology Project data set, and the data from the operational weather satellites. The cloud data was combined with a computer re-creation of Earth's air currents, driven by multiple surface observations and satellite data sets. 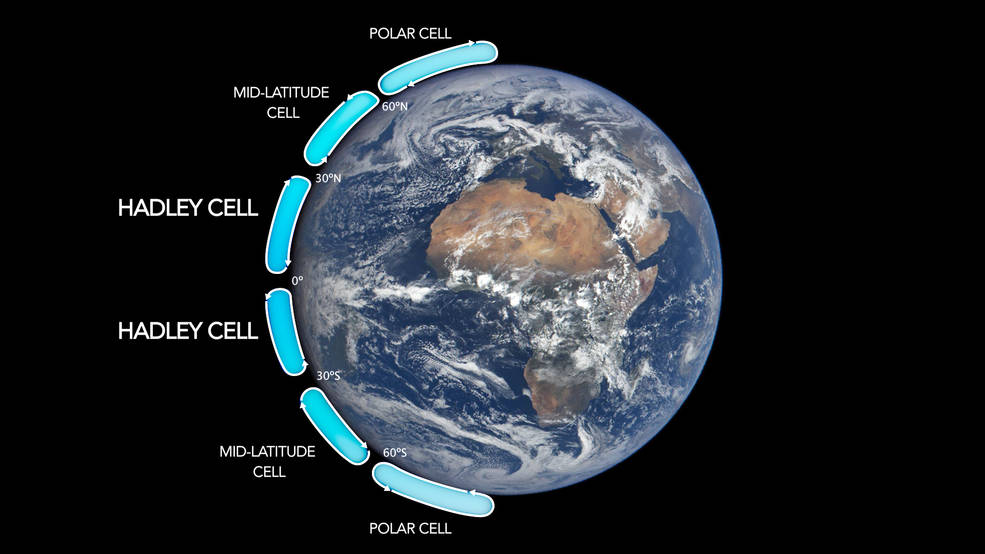 The Hadley cells describe how air moves through the tropics on either side of the equator. They are two of six major air circulation cells on Earth. Image credit: NASA

The study showed the poleward shift, observed in the northern and southern hemisphere, was connected with the expansion of the tropics, defined by the Hadley cell circulation, rather than with the motion of jet streams. Hadley's circulation exists in both hemispheres, starting with the rising of warm air in the tropics. At higher latitudes, the air mass gets pushed from the equator toward the mid-latitudes to the north and south and begins to sink back toward the surface.

"What we find, and other people have found it as well, is that the sinking branch of the Hadley cell, as the climate warms, tends to be moving poleward. It's like you're making the tropical region bigger. And that expansion causes the tropical air currents to blow into the high altitude clouds, pushing them toward the poles," explained George Tselioudis, a climate scientist at NASA's Goddard Institute for Space Studies and Columbia University in New York City.

"Sometimes when that curtain is pulled, as in the case over the North Atlantic Ocean in the winter months, this reduces the overall cloud cover in the lower mid-latitudes, the temperate regions outside of the tropics," Tselioudis said. The high altitude clouds clear to reveal dark ocean below responsible for absorbing the incoming sunlight and triggering a warming effect.

In the Southern Ocean, around the Antarctica region, the high-altitude clouds usually move out of the way, and the clouds in the lower latitudes continue reflecting the incoming heat. The combined results show the cloud interaction with atmospheric circulation and solar radiation is a rather complex system in which the tropical circulation has a dominant role.

These results will be used by the climate modeling community, according to Lazaros Oreopoulos, a cloud and radiation budget researcher at NASA's Goddard Space Flight Center in Greenbelt, Maryland, who was not involved in the research.

"If current behavior is not well simulated, then confidence in predicted future behavior will be lower. I anticipate this study to be looked at carefully and affect thinking on these matters," concluded Oreopoulos.

Featured image: The Hadley cells describe how air moves through the tropics on either side of the equator. They are two of six major air circulation cells on Earth. Image credit: NASA