Researchers have utilized the observations from the Lightning Imaging Sensor onboard NASA's Tropical Rainfall Measurement Mission to investigate which location has a maximum lightning activity on Earth. According to data analysis, Lake Maracaibo in Venezuela is a new lightning capital with a rate of about 233 flashes per square kilometer in one year. The first place was previously held by the Congo Basin in Africa.

A high-resolution data set used to investigate the areas of top lightning activity was obtained from 16 years of space-based LIS observations. Researchers from the University of São Paolo, the University of Maryland, the National Oceanic Atmospheric Administration (NOAA), and the University of Alabama in Huntsville have conducted a joint investigation on the matter, to improve our understanding of a lightning phenomenon and help in predicting its occurrence. 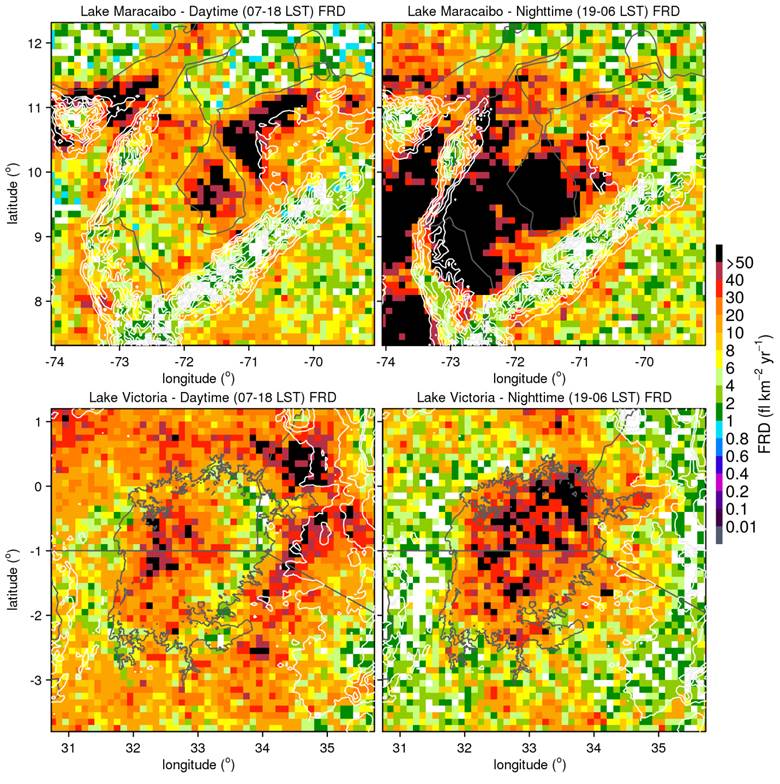 According to Dennis Buechler from the University of Alabama, Lake Maracaibo location is ideal for thunderstorms development due to its unique geography and climatology. The lake is the largest in South America and a part of the Andes Mountain chain. With night breezes constantly developing and converging over the layer of the warm, moist air above the lake's surface, the site has unique conditions necessary to allow the development of persistent deep convection. The conditions at the site are capable of generating on average 297 nocturnal thunderstorms per year with a maximum in September.

Six of the world's top ten locations of lightning activity are still in Africa. Most of them are situated by Lake Victoria and the lakes along the East African Rift Valley in environmental conditions similar to those of Lake Maracaibo.

In general, lightning activity is concentrated over land with lightning peaks in the afternoon, and reduced over oceans, as confirmed by this research.

LIS is capable of detecting the distribution and variability of total lightning, including cloud-to-cloud, intracloud, and cloud-to-ground, that happens across the tropics, by using a high speed imaging system to search for changes occurring in the optical output caused by lightning in the cloud tops. After analyzing a wavelength band in the near-infrared spectrum, around 777 nanometers, the instrument's sensors can spot brief flashes of lightning, even under bright daylight

"Our research using LIS observations in new ways is a prime example of how NASA partners with scientists all over the world to better understand and appreciate our home planet," said Blakeslee.

LIS was build in the 1990s, and the same research team at Marshall has now created another unit, waiting to be launched on a Space Exploration Technologies rocket to the International Space Station in August 2016.