Disastrous floods that hit the Balkans in 2014 are likely linked to the temporary slowdown of giant airstreams, according to a recent study published in Science Advances. The study adds evidence that so-called planetary wave resonance is a key mechanism for causing extreme weather events in summer. Furthermore, the study showed that extreme rainfall events are strongly increasing in the Balkans, even more than the globally observed rise.

These wind patterns, circling the globe in the form of huge waves between the Equator and the North Pole, normally move eastwards, but practically stopped for several days in May 2014 – at the same time, a weather system (Vb Cyclone "Yvette") got stuck over Bosnia and Herzegovina, Serbia and Croatia and poured out record amounts of rain.

Heavy rains lasted for several days ultimately ending as the worst flooding in the history of Balkans. At least 100 000 structures and homes were destroyed, 45 people lost their lives, more than 2.5 million have been affected and nearly one million have been displaced.

“We were surprised to see how long the weather system that led to the flooding stayed over the region – it’s like Yvette was trapped there,” says Lisa Stadtherr from the Potsdam Institute for Climate Impact Research (PIK), lead-author of the study. 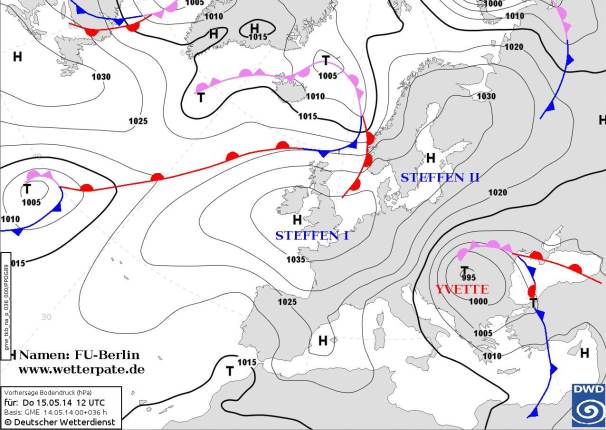 Yvette over Southeast Europe on May 15, 2014. Credit: Deutscher Wetterdienst 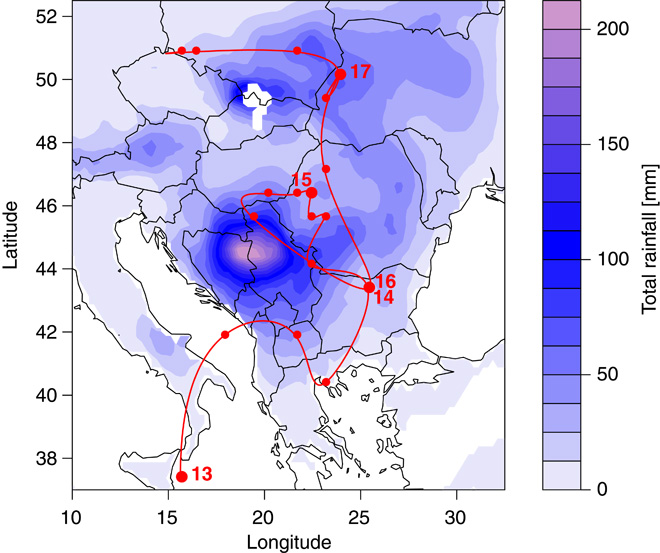 Accumulated rainfall (blue colors) over southeastern Europe from May 13 to 16, 2014 (in millimeters) and the position of cyclone Yvette tracked by its lowest core pressures (red line). Large red dots represent the position at 12:00 a.m. with the date labeled, and small red dots indicate positions at 6:00 a.m., 12:00 p.m., and 6:00 p.m. Credit: Lisa Stadtherr et al.

Daily precipitation averaged over the BHSC region during the first half of 2014, showing clusters of heavy rainfall in April and around May 3 (dark blue), before the record-breaking rainfall events associated with cyclone Yvette (May 14; dark blue). Horizontal lines indicate monthly means for April and May 2014 (dashed) and their climatology (dotted). Credit: Lisa Stadtherr et al.

While the mean daily rainfall in the Balkans has increased only a little since 1950, the intensity of the strongest rainfall events rose by one third, the scientists found.

In May 2014, daily rainfall amounts were locally bigger than ever before in the observed period. The frequency of such potentially devastating extremes in the Balkans, though they’re still rare, doubled over the past sixty years.

“We had a similar situation in 1997 in Germany, resulting in the Elbe flooding”

“This is worrying, all the more because we’re seeing increasing extreme rainfall in many parts of the globe,” says co-author and PIK project head Dim Coumou. “The changes over the Balkan are substantially larger than those expected from simple warming of the air.”

Regional temperatures rose by one degree since the middle of the past century, and the increased water holding capacity of warmer air intensifies heavy rainfall by about 7 percent per degree of warming. “Yet the observed rainfall changes in the Balkans are roughly five times that much – hence, other factors must have come into play.”

The scientists detected that the unusual trapping of the weather system over the Balkans happened at the same time when so-called planetary waves of the jetstream circulation also became trapped.

“This does not prove causality, but the co-occurrence is at least suspicious – particularly since we had a similar situation for instance in 1997 in Germany with cyclone ‘Zoe’, resulting in the devastating Elbe flooding,” says Coumou. “We provide evidence that the near stationarity of the waves was linked to a subtle phenomenon we call resonance.”

A mechanism for creating extreme weather events in summer in general

This mechanism has first been put forward by PIK scientist Vladimir Petoukhov only a few years ago, opening a new branch of research; he is co-author of the present study. The scientists produced a video to explain the mechanism which might be a decisive factor for creating extreme weather events in summer in general.

“Our findings provide more evidence that planetary waves cause extreme weather events,” says co-author Stefan Rahmstorf, chair of PIK’s research domain Earth System Analysis. “When these waves start to resonate this can have serious impacts for people on the ground. I am concerned that the ongoing climate change may be creating conditions more favorable for this kind of resonance.”