Residents of China are experiencing another wave of severe smog pollution since December 18, 2015. The smog conditions have prompted Beijing authorities to issued its second red alert in the history, as hazardous conditions have been expected to last more than three days.

The local authorities continue to battle the thick smog that covered over 20 cities across northern China, including the capital Beijing, Hebei, Henan, Shandong, Shanxi, and Tianjin, over the last couple of days. 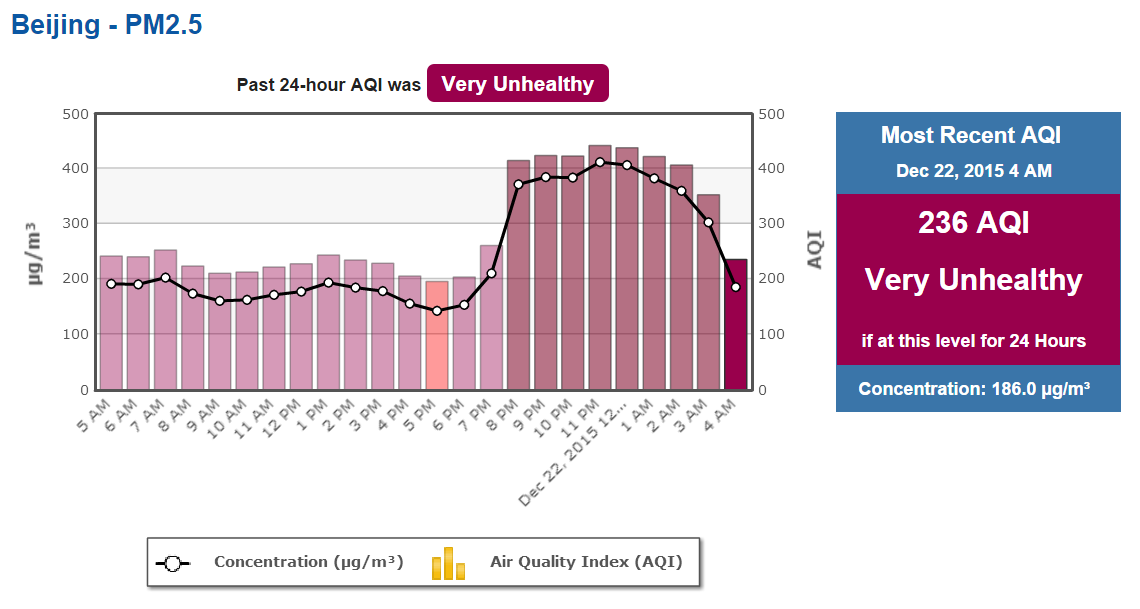 The smog particles PM2.5 only 2.5 microns in diameter pose a dangerous health threat to the residents. According to the local authorities, the pollution level will peak on December 22 before a strong cold front starts to influence the regions and clears the air.

Maximum limit of PM2.5 particles is 25 micrograms per cubic meter in a 24 hour period, according to the World Health Organization.

The average density of PM2.5 class aerosols in 74 cities dropped 16% so far this year, according to Environment vice-minister Li Ganije.

As the red alert was issued, Beijing ordered a car ban, although some experts think this action is only capable of producing a limited effect. However, measures such as putting the work of the polluting factories to a halt will probably have a much stronger effect.

The best strategy will be to upgrade the industrial structure to capabilities of using clean energy, which will be a long and difficult process and could last between 30 and 50 years, according to Zhang Dawer, head of the Beijing Environmental Emergency Center.

The Chinese government plans to reduce pollution levels by restricting emissions from coal-fired power plants by 50% over the next five years.

"The industrial development of this region has far exceeded the capacity of the environment. We must strictly enforce the Environmental Law, closing down the polluters that fail to meet the standards," But Ma Jun, director of the Beijing Institute of Public and Environmental Affairs stated.