An unusual plankton growth has been discovered in the North Atlantic, in contrast to the scientific predictions for the area. The discovery suggests a swift environmental change as a result of increased amounts of carbon dioxide may be underway.

A team of researchers has conducted a study to investigate the microscopic algae growth in North Atlantic and the results have, to their surprise, showed a major increase of certain species. For example, in a period between 1965 and 2010, the abundance of single-cell organism coccolithophores showed a tenfold increase with sharp peaking during the late 1990s.

Coccolithophores are single-cell algae organisms that cloak themselves in a distinctive cluster of pale disks made of calcium carbonate, or chalk. They play a role in cycling calcium carbonate, a factor in atmospheric carbon dioxide levels. In the short term they make it more difficult to remove carbon dioxide from the atmosphere, but in the long term – tens and hundreds of thousands of years – they help remove carbon dioxide from the atmosphere and oceans and confine it in the deep ocean.

"Something strange is happening here, and it's happening much more quickly than we thought it should," said Anand Gnanadesikan, associate professor in the Morton K. Blaustein Department of Earth and Planetary Sciences at Johns Hopkins and one of the study's five authors. 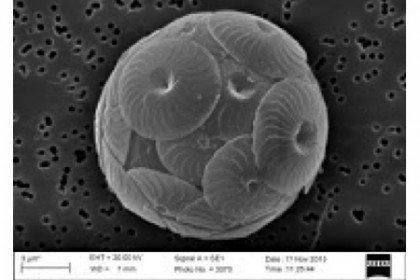 A scanning electron microscope image of a coccolithophore, which can measure from 5 to 15 microns across, less than a fifth the width of a human hair. Image credit: Amy Wyeth, Bigelow Laboratory for Ocean Sciences.

Although the results present good news for the species that feed on coccolithophores, it could also mean these results are a direct consequence of rising carbon dioxide levels in the ocean.

"What is worrisome is that our result points out how little we know about how complex ecosystems function. The result highlights the possibility of rapid ecosystem change, suggesting that prevalent models of how these systems respond to climate change may be too conservative," Gnanadesikan added.

The laboratory studies support the conclusion, from the team's analysis of Continuous Plankton Recorder survey data from the North Atlantic Ocean and North Sea since the mid 1960s, that rising carbon dioxide in the ocean is causing the microalgae population to bloom.

"Our statistical analysis on field data from the CPR point to carbon dioxide as the best predictor of the increase in coccolithophores, The consequences of releasing tons of CO2 over the years are already here and this is just the tip of the iceberg," Sara Rivero-Calle, a lead author of the study explained.

The CPR survey project commenced in the early 1930s, and is involved in continuous study of plankton organisms forming a vital part of the marine food chain. 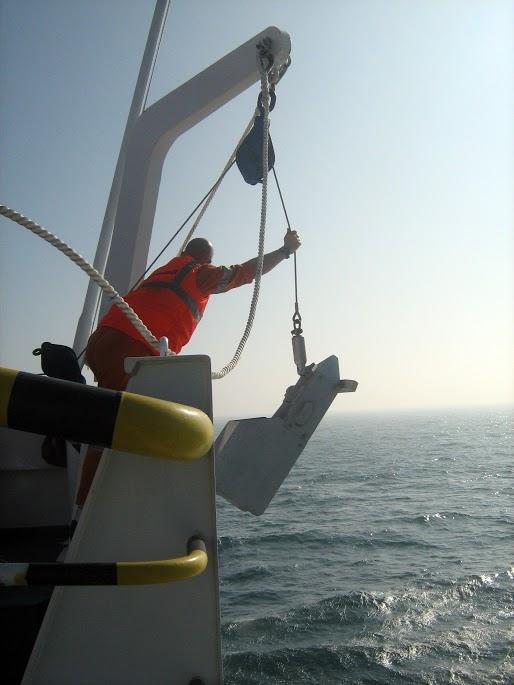 A ferry crewman works with gear used in the Continuous Plankton Recorder survey, an ongoing study of plankton in the North Atlantic and North Sea launched by a British marine biologist in the early 1930s. Credit: Sir Alister Hardy Foundation for Ocean Science

The scientists have not expected such results, as the thought that ocean acidity resulting from higher carbon dioxide concentration would suppress the algae growth.

"Coccolithophores have been typically more abundant during Earth's warm interglacial and high CO2 periods. The results presented here are consistent with this and may portend, like the 'canary in the coal mine,' where we are headed climatologically," William M. Balch of the Bigelow Laboratory for Ocean Sciences in Maine, a co-author of the study, said.

Traces of coccolithophores organisms on Earth, made during eons have helping scientists in uncovering significant environmental shifts. A nice example of large coccolithophores deposit are the White Cliffs of Dover, although a close inspection shows the thick white deposits have been interrupted by slender, dark bands of flint, a product of organisms that have glassy shells made of silicon, according to Gnanadesikan.

"These clearly represent major shifts in ecosystem type. But unless we understand what drives coccolithophore abundance, we can't understand what is driving such shifts. Is it carbon dioxide?" Balch sad.

Featured image: This is a scanning electron microscope image of a coccolithophore, which can measure from 5 to 15 microns across, less than a fifth the width of a human hair. Image credit: Amy Wyeth, Bigelow Laboratory for Ocean Sciences