The event was associated with a Type II (estimated velocity 957 km/s) and a Type IV radio emissions. Type IV emissions occur in association with major eruptions on the Sun and are typically associated with strong CMEs and solar radiation storms.

Additionally, a 10cm Radio Burst lasting 11 minutes (peak flux 670 sfu), was associated with the flare event. This can be indicative of significant radio noise in association with a solar flare. This noise is generally short-lived but can cause interference for sensitive receivers including radar, GPS, and satellite communications.

Region 2449 has 'Beta' magnetic configuration and is now rotating into a more geoeffective position, showing signs of a minor growth.

CME produced by today's M3.9 solar flare is not Earth-directed, however, a glancing blow is possible in about 2 – 3 days. 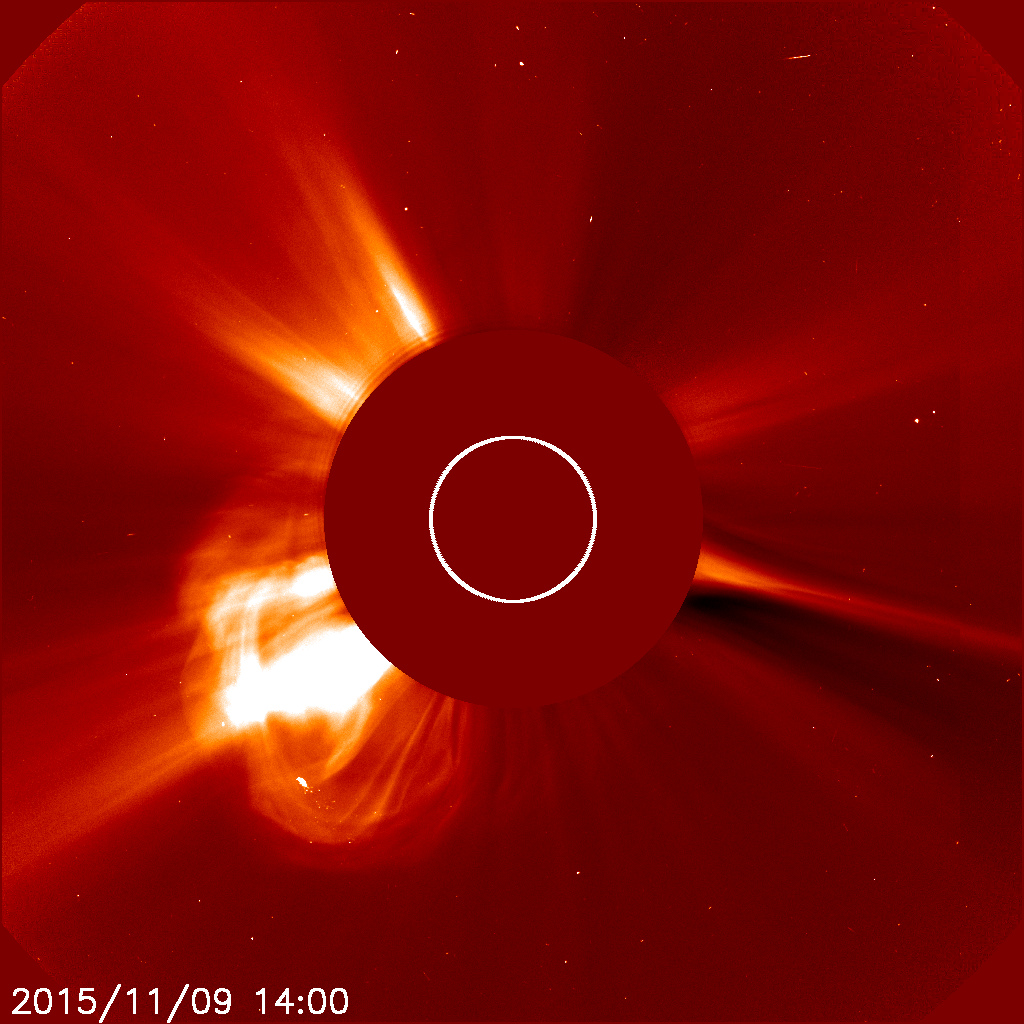 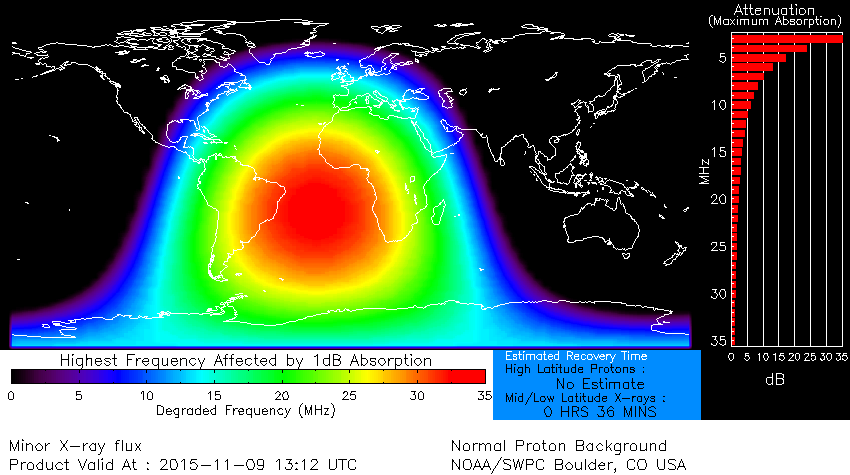 SWPC reports a filament eruption centered near N05E51 was observed lifting off in GONG/H-Alpha imagery between 00:25-02:40 UTC on November 9. Further analysis will be conducted to determine if there is a CME associated with this event as more coronagraph imagery becomes available.

Solar activity is expected to be low with a slight chance for M-class (R1-R2 (Minor-Moderate) Radio Blackouts) flares over the next three days (November 09 – 11).

Region 2449 showed minor growth over the last 24 hours while the remaining active regions were either stable or in decay. 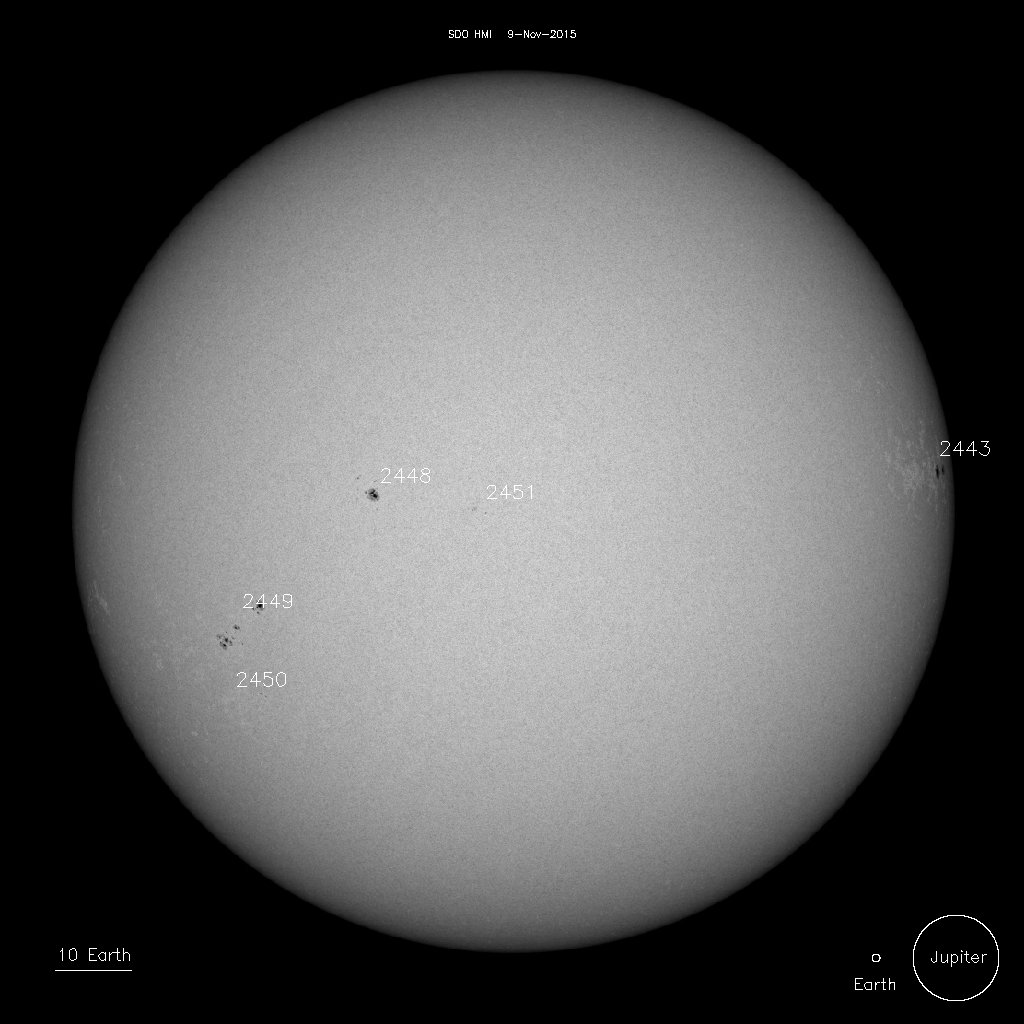 The greater than 2 MeV electron flux reached high levels with a peak flux of 6,280 pfu observed at 11:55 UTC today. The greater than 10 MeV proton flux was at background levels throughout the period.

IMF total field strength values decreased from initial values near 10 nT to around 5 nT late in the period while Bz was primarily southward and steady near -4 nT. The phi angle was steady in a positive (away from the Sun) solar sector orientation until around 17:00 UTC on November 8 when it became variable.

Solar wind speeds are expected to remain slightly enhanced (~450-550 km/s) over the next three days due to continued CH HSS influence.

The geomagnetic field was at quiet to active levels over the last 24 hours. It is expected to reach G1 (Minor) geomagnetic storm levels mid-day to late on November 9 due to CIR effects followed by the influence of a positive polarity CH HSS. Quiet to active field conditions are expected on November 10 to 11 due to continued but weakening CH HSS influence.