Deadly Tropical Cyclone "Chapala" had just dissipated over Yemen when another tropical cyclone, soon to be named Megh, started forming in the warm waters of the Arabian Sea on November 4, 2015. Megh hit Socotra island around 06:00 UTC today and is expected to make another landfall in Yemen late November 10/early November 11.

On November 6, at 06:00 UTC, Megh had maximum sustained winds of 83 km/h (52 mph) and its center was located approximately 800 km (500 miles) east of Socotra. The system was strengthening and it became obvious it will follow almost the exact path as that of Chapala. 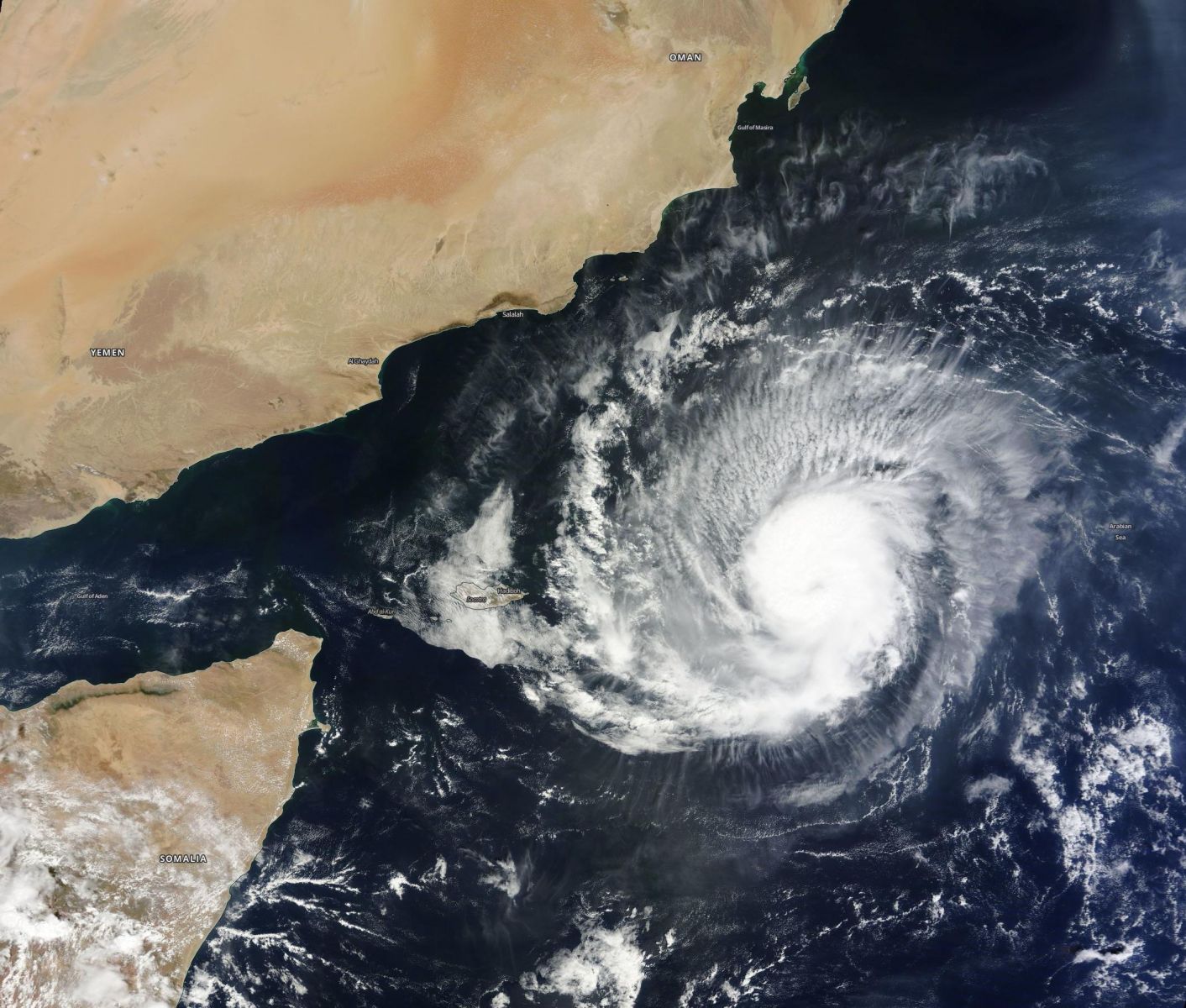 Megh hit Socotra about 06:00 UTC on November 8, as a Severe cyclonic storm. It brought 1-minute maximum sustained winds to the region of around 166 km/h (103 mph). On the Saffir-Simposn Hurricane Wind Scale this would be an upper edge of Category 2 storm system.

For comparison, when Chapala moved over Socotra, on November 1, it had maximum sustained winds of about 205 km/h (127 mph), it left three people dead and 200 injured.

After impacting Socotra, Chapala hit areas of northeastern Somalia where it destroyed houses, sunk fishing boats, displaced hundreds of people and ultimately made landfall over southern Yemen, causing eight fatalities and at least 40 injured in Hadramaut Governorate on November 3, 2015. ​

According to NASA's Earth Observatory, Chapala was the first, and strongest, tropical cyclone that hit Yemen since the records were started in 1940. Its landfall marked the third time in six decades that any cyclone made landfall on the Arabian Peninsula.

Upon landfall, the storm had brought several years’ worth of rain in just a matter of days. It caused severe flooding and widespread damage to roads, homes and bridges. In Mukalla, over 1 meter (40 inches) of water overflowed the streets, according to Yemen Post Newspaper. According to UN figures, at least 700 homes have been damaged or destroyed, close to 1 million were affected. 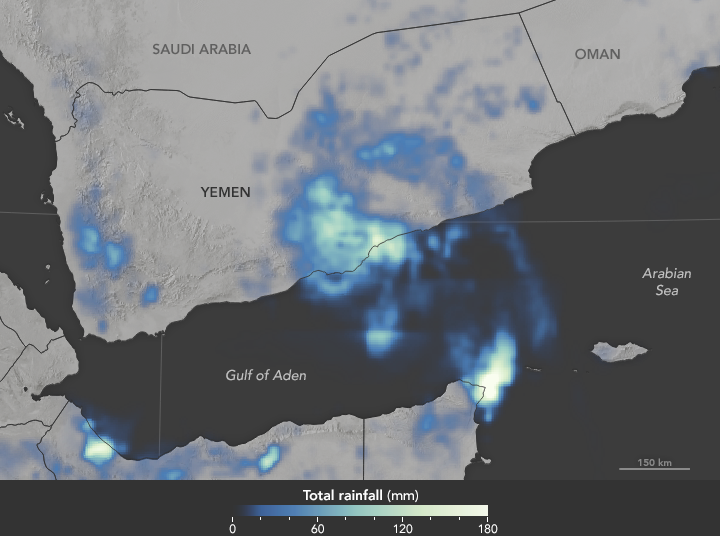 ​The map shows a satellite-based estimate of rainfall in Yemen from 3 p.m. local time (12:00 Universal Time) on November 3 to 3 p.m. (12:00 UTC) on November 4, 2015. The measurements are regional estimates, so totals reported by ground stations can be significantly higher or lower. The brightest colors on the map represent rainfall approaching 180 millimeters (7 inches) over the course of the day. On average, most of Yemen sees no more than 100 millimeters of rain in a year; coastal areas receive less than 50 millimeters. Image credit: NASA/JAXA GPM. 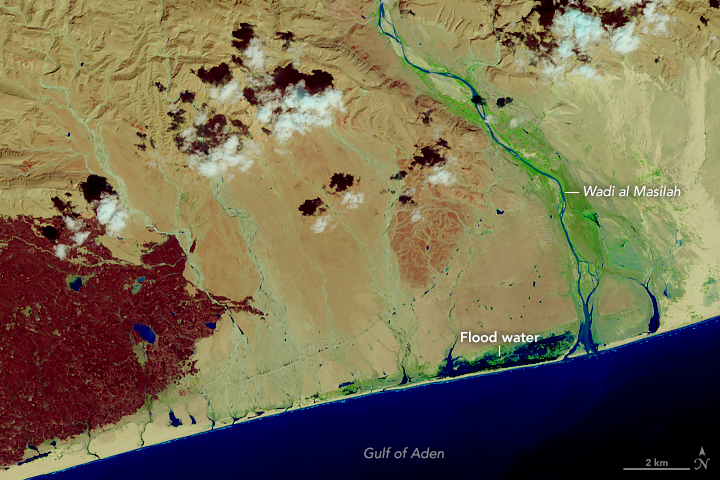 Chapala drenches the desert – November 4, 2015. Shades of blue and green reveal areas with standing or flowing water; reds often indicate vegetation. Much of the region is marked by ephemeral river beds, or wadis, such as Wadi al Masilah. A line of green dots—likely pooled water—trails south and west from the Wadi toward the coast, perhaps through smaller stream beds. Near the coast, several kilometers of land are inundated with water, perhaps from the rainfall or from a storm surge. Image credit: NASA/USGS Landsat-8 OLI.

"A strike on the Arabian coast by a major tropical cyclone is rare due to great amount of dry air that is drawn in from the Arabian Peninsula well ahead of the storm," AccuWeather meteorologists Alex Sosnowski said.

Weather Channel Hurricane Specialist Michael Lowry identified two severe cyclonic storms in the India Meteorological Department records. They made landfall in 1959 and 1960, respectively, in Yemen. It was also rare to see a storm of Chapala’s strength as far south as the Arabian according to The Weather Channel. (Forbes)

“Chapala has significantly cooled the waters that Megh is now tracking, thereby limiting its strength,” said Jason Nicholls, a senior meteorologist at Accuweather.com. 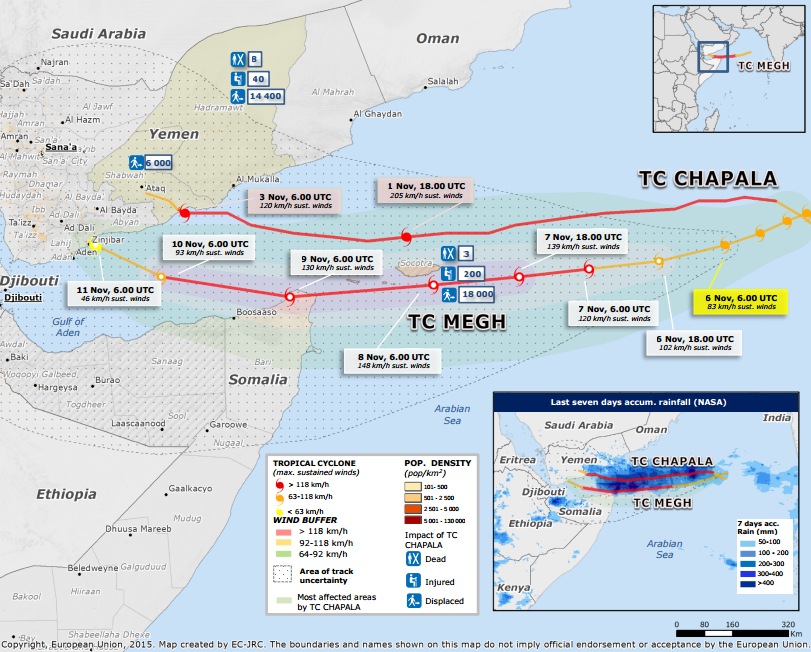 Megh is expected to pass just north of Cape Gardafui, Somalia late on November 8/early November 9 and then curve over the Gulf of Aden where it will encounter cooler waters and increasing vertical wind shear which are expected to weaken it before it makes another landfall, this time near Aden, Yemen late November 10 or early November 11.

"The compact tropical cyclone will make a landfall in Yemen as a very severe cyclonic storm. Beyond that, land interaction will cause Megh to dissipate rapidly, completely decayed by the next 96 hours," JTWC noted at 09:00 UTC today.